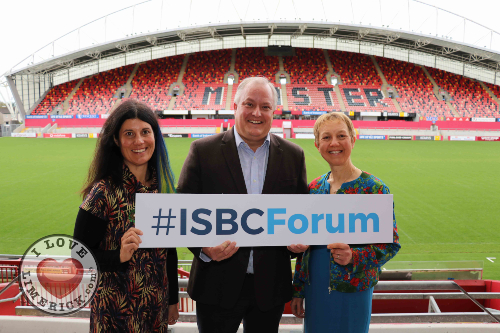 Elysha Ní Chúláin is joined with Richard Lynch to take a look at this week’s Local Business, Events, Sports, Arts and Entertainment news around Limerick.

Limerick Podcast episode 25 we discussed in the opening episode of I Love Limerick’s Podcast show was the recent events that took place in Limerick last week. To start Elysha talked about are Hero of the week, Aíne O’ Neil from Raheen, limerick. In 2017 Aíne was diagnosed with a brain tumor. Aíne had to endure a 7-hour long surgery. Unfortunately, the tumor was malignant so Aíne had to go St Luke’s hospital for 30 days of radiation treatment. Finally, after almost 3 months Aine started to rebuild her life but However, once again the battle continued when her family was told the devastating news that it had not gone away and Aine had to return to the hospital for chemotherapy in Crumlin hospital.

Finally, some good news the chemo was working and the tumor was greatly reduced and light at the end of a very dark tunnel. Aine did a few months in Rehab in the National Rehabilitation Hospital.

On Monday, October 21st, Aine and her Mum arrived with a Garda Escort to Shannon Airport where they received a VIP welcome fit for a Queen from the Airport management and staff. To help create a magic atmosphere, there to meet them was an airport staff member dressed in a Harry Potter costume, and two Shannon Castle Entertainers dressed in their medieval costumes who presented Aine with an annual family pass to Shannon Heritage’s Bunratty Castle and Folk Park attraction.  The VIPs were escorted to the Shannon Duty-Free where they were presented with a gift. From there they were escorted to the Presidential Suite for some pampering where they enjoyed specially designed Harry Potter cupcakes.

Richard then talked about Local artist Barbara Hanley as she had her first art exhibition on October 24  ‘Opening of Landmarks’ Exhibition. It was a great opening success in Narrative 4. Barbara Hanley is 43 years old and is originally from Killarney, co. Kerry. Barbara is a service user with the Daughters of Charity in Lisnagry. She has worked in Limerick City since 2000 in the Tait Centre, and now the Garvey Centre on John’s Street, but Barbara’s truest passion is art.

For the past 3 years, she has been working on drawings and paintings of local Limerick places that she loves, her favorite building in Killarney where she grew up and one of New York, where she would love to visit. This has all been possible from the art projects available at The Daughters of Charity.

In other inspirational news. The Unity Gospel Choir Limerick held a press launch on , Wednesday, October 23 at Maggi Choo’s 101 to introduce their new CD, ‘Love Shine a Light’ in aid of Pieta House and in memory of suicide victims Brendan (Benny) McNamara and Yasmin Lee Williams.

The CD is set to officially launch Monday, November 11 at Maggi Choo’s at 101 and will have Patrick J. Hogan as compère. The Mayor, Mr. Michael Sheehan amongst other guests will also speak on the night and will be accompanied by a few songs from the choir, including the new single ‘Love Shine a Light’. Chloe O’Halloran will also perform on the night. The official launch will take place at 6.30 pm on Monday, November 11 at Maggi Choos at 101.

In business news, The Irish Social Business Campus (ISBC) recently held its inaugural forum in Thomond Park Stadium to gather together private, public and non-profit sectors to explore the possible way they can all collaborate to make a social impact and to help promote and inspire social change.

The ISBC is a new collaborative initiative, set-up in the interest of providing a support system for social enterprises across Ireland. Their aim is to help foster a growing community of viable, robust and socially impactful businesses and individuals. ISBC was initiated by BNest, the first dedicated Social Enterprise Incubator Programme in Ireland was established in 2016.

Its been a busy week for many of the colleges and universities in Limerick this week. The University of Limerick brand has been unveiled after the first-ever reimagining of the University’s brand. A dynamic new logo has been designed as part of an extensive brand refresh project. It is the University’s first identity refresh since 1989 when the University of Limerick Act was enacted. The evolution of the logo remains true to elements of the original heraldic crest but has been modernized for a digital age. It was unveiled to the campus community this Tuesday, October 22 by UL President Dr. Des Fitzgerald.

The Vocational Training Opportunities Scheme (VTOS) Limerick held it’s 2019 Graduation ceremony at the Kilmallock Road Campus on Thursday, October 24. The ceremony was a great success for both the graduates and the Limerick and Clare Education and Training Board, with over two dozen students completing their course and receiving their qualifications.

The center offers both the Junior and Leaving Certificates, with nine subjects to choose from for the Leaving Certificate, which is studied over the course of one year, instead of typically two. Other courses on offer, are Career Pathways, English for Work, Retail Sales, Healthcare Support, Office Administration, all ranging from QQI Major Award Levels 3-5.

The reception of the ceremony was hosted by the hospitality trainees and showed a video montage of the past year, including the graduate’s trip to Paris and recent events. The graduates were awarded their certificates by Councillor Michael Sheahan, the Mayor of the City and County of Limerick.

And Finally, Limerick College of Further Education (LCFE) celebrated another successful year with its Annual Graduation which was held at The Strand Hotel on Thursday, October 24. Almost 250 learners received awards in various disciplines. In his address to the audience, Principal of LCFE, Pat Maunsell, drew attention to the graduates’ work and effort, “Today is the highlight of our academic year because it honors and celebrates your achievements.

We are all proud of the fact that you have gained your award with us through hard work and commitment over the last one or two years. The College slogan is ‘realizing new futures’. I hope that your success at LCFE is the beginning of a great future for you.”

This theme was carried through by Mr. George O’Callaghan, CE of Limerick and Clare Education and Training Board, congratulating the graduates on their hard work and dedication in achieving their award.  This award is “a passport to the world of work and life”.

In spooky Halloween news, Fresh Blood 2019 workshops are taking place on the weekend of November 2 and encourages all interested between the ages of 13-19 to get involved and learn the skills and techniques of horror filmmaking. Fresh Film is set to host its annual horror filmmaking workshop ‘Fresh Blood’ at Tait House Community Enterprise over the course of the weekend beginning Saturday, November 2 and aims to have participants create an original short film with the help of a team of professionals.

A timely Halloween event, Fresh Blood is an intense weekend of horror filmmaking, where participants explore the horror genre with screenings of short films, discussion, and exercises to develop a horror story for the screen. This weekend series of workshops culminating in the shooting of an original short film on location in the grounds of Tait House.

This year’s theme is “Behind the Mask”- recognizing that the faces of others can be masks hiding unknown terrors. The Fresh Blood workshop will take place for two days, Saturday 2 and Sunday 3 of November from 10 am to 6 pm at Tait House Community Enterprise. Limerick.

Richard also discussed Shannon groups latest announcement. Shannon Group is delighted to welcome today’s announcement by Lauda, the low-cost Austrian airline, of a new service from Shannon Airport to Vienna next year. The announcement will see the first scheduled Vienna service ever at Shannon and the first time that Lauda will have operated at Shannon. Flights will run twice weekly from the end of March 2020 on Wednesday’s and Saturday’s.

And finally in Local news. The Land Development Agency, Limerick City and County Council and CIÉ to work together on a proposed urban living district. Limerick City and County Council, the Land Development Agency (LDA), Córas Iompair Éireann (CIÉ) and other stakeholders have today announced plans to explore how a strategic land bank in excess of 50 hectares under state ownership can be re-imagined and re-developed to create a new 21st Century urban neighborhood at Limerick’s city center train and bus station, Colbert Station.

The redevelopment project will be master-planned in line with the best international principles of sustainable transport-oriented development to provide for a new urban living district including housing, work, cultural and play areas, along with public services such as health and educational facilities.

The Board of the LDA has agreed today to provide initial funding to commence the master-planning process for the lands, of which the CIE lands make up the majority. The process will also incorporate analysis of infrastructure, funding and other implementation requirements and help inform the on-going process being conducted by Limerick City and County Council for the statutory development plan for Limerick.

Related Topics:iloveilmerickilovelimerick podcastpodcast
Up Next