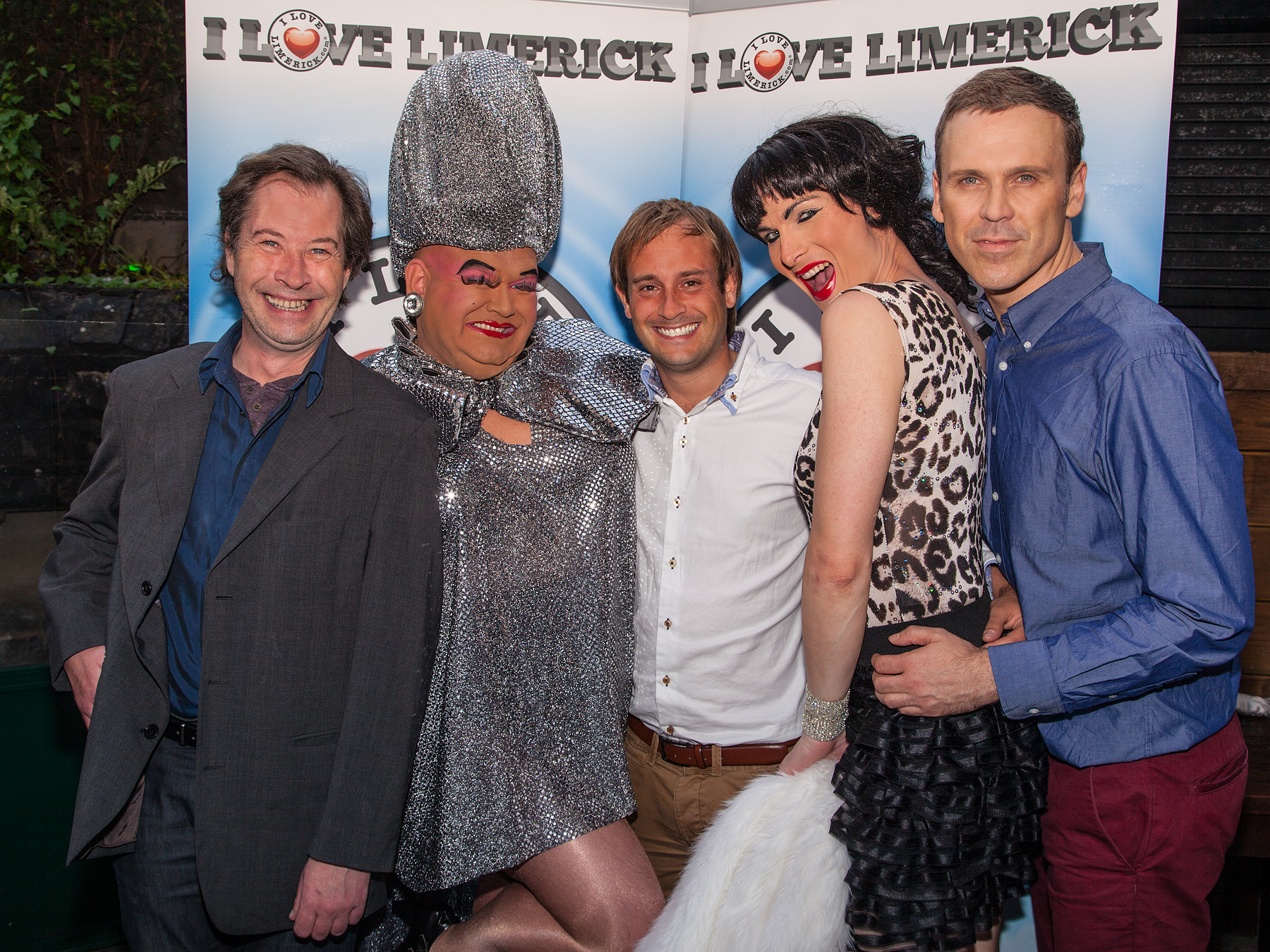 The countdown to Limerick Pride Festival officially began with the press launch at The Orchard Bar in Limerick City on Thursday August 7.

At the launch Dave Cuddihy, Chairperson of Limerick Pride, said: “We are thrilled to be able to offer a fantastic line up for Limerick Pride 2014. We really have an opportunity to grow as a festival this year, thanks to the City of Culture. There is something for everyone during Pride Week 2014 culminating in the annual Pride Parade on Saturday August 30 and PrideFest 2014 at The Potato Market.  We want to welcome everyone to join us in celebrating LGBT culture in Limerick and show Limerick for the truly open and accepting city that she is.”

The Festival will be taking place the week of August 24-31 will feature a multitude of events, from workshops and discussion of current political issues to evenings of traditional Irish music and club nights, to cater to the Pride needs of everyone.

Highlights include a community information evening on the topic of “Hate Crime – Support to Report”, which is taking place in conjunction with GOSHH, An Garda Síochána and Transgender Equality Network Ireland (TENI) at the Absolute Hotel on Monday August 25. It will showcase the findings of TENI’s STAD Report 2013, which specifically records transphobic hate crimes, followed by a discussion of how society, the community and every individual can provide support to victims of hate crimes and encourage them to report incidents.

Thursday, August 28, will see the coronation of Mr & Ms Gay Limerick 2014 at Crush 87 nightclub. After the main event, hosted by Paul Ryder, attendants are welcome to dance the night away with DJ Regina George. Tickets are priced at €8. Saturday August 30 will see the annual Pride Parade bring some extra colour and music to Limerick City Centre, as it makes its way from City Hall up O’Connell St, across Mallow St to Henry St, before returning to the Potato Market for PrideFest 2014 – a showcase of LGBT Culture in Limerick that you will not want to miss! This year PrideFest has it all: a bigger stage and even bigger performances, featuring Laura Tapp, Europe’s No 1 Pink Tribute, Grenade and X Factor semi-finalist Misha B with your hosts Queen Celine and Paul Ryder.

12.30pm:  Pride in the Park – Dog Show, Sports, Kids Entertainment + Music.  Fill your picnic basket and enjoy a day out in Peoples Park.

6.30pm: Hate Crime – Support to Report.  Community information evening in conjunction with GOSHH, An Garda Síochána and TENI – To introduce the finding of the TENI STAD report 2013 and facilitate a constructive discussion about practical things we can do as a society and individual to support people to report hate related crimes. Absolute Hotel.

6.30pm:  The OUTlet open group @ GOSHH, Davis Street.  The OUTlet is a non-alcoholic social group for Lesbian, Gay, Bisexual and Trans* adults. It is a confidential, safe space. Adults 18+

7.30pm:  Pride Wedding Fair @ No 1 Pery Square.  Enjoy a relaxed evening filled with ideas for your Civil Partnership/Wedding.  A host of vendors including wedding planners, ring designers, florists, fashions and many more.  Open to all regardless of orientation.

Wednesday 27th August: 9.30am- 5.30pm:  Rapid HIV testing available at GOSHH, Davis Street.  Please email [email protected] to book test.  Everyone has a status, do you know yours!

7pm:  Sexual Health Workshop – Exploring origins of HIV, modes of transmission, treatment and living with HIV.   Open to any person interested in learning more about HIV.

8pm:  The Priscilla Experience – Enjoy the camp classic Priscilla, Queen of the Desert in full cinema setting with a few surprises thrown into the mix.  Don’t just see the movie, Be the Movie!  Dress to impress!  Tickets €6.  Pre-booking advisable @ www.LimetreeTheatre.ie

9.30am- 5.30pm:  Rapid HIV testing available at GOSHH, Davis Street.  Please email [email protected] to book test.  Everyone has a status, do you know yours! 7pm:  Sexual Empowerment workshop for Gay, Bisexual and Trans Men @ GOSHH, Davis Street. The infamous Sexual empowerment workshop explores what good sex is and how to have it. In this workshop, communication in sexual relationships and why people are afraid to say what they want is explored as well as what good sex means for you. 18 +

8.30pm: Mr + Ms Gay Limerick 2014 @ Crush87, Michael Street.  After the success of Donal & Lisa in 2013 who both came out as first runner up in Mr & Ms Gay Ireland, who is going to take the crown this year and can they go one step better.  To enter contact [email protected].  Hosted by the one and only Paul Ryder with special performance, dance the night away as Regina George DJ’s into the early hours!  Tickets €8.

10am – 4pm: Open Day @ GOSHH, Davis Street. Raising awareness of the support and services available @ GOSHH.  Open to people who identify as LGBT, family and friends with questions related to Gender, Orientation, Sexual Health and HIV.

7pm:  Coming Out Workshop @ GOSHH, Davis Street.  This workshop is for anyone who is thinking of coming out, has come out, or would like to talk about coming out. In this workshop explore what coming out is and how it affects people, also explore the do’s and don’ts of coming out.

9pm:  “Twas the night before “ @ Mickey’s.  One of the stand out nights of Pride 2013 is back for a second year.  Mickey Martins host the ultimate pre Pride party with guest DJ’s, camp classics and one hell of a Party.

11.30pm:  Pre-Pride Party @ MILK, Glentworth Street.  Start the weekend as you mean to go on.  Special guest DJ to keep you partying till the wee hours.  Don’t forget to set your alarm for the Parade though!!!

11am:  Pride Breakfast from 10am @ The Old Quarter

3pm:  PRIDEFEST 2014 – Join this fun community day for a celebration of LGBT Culture on a scale which Limerick has never seen before.  The Potato Market Limerick will be transformed into the ultimate Pride party.  Bigger stage, bigger performances and something for all the family.  Let your hosts Celine & Paul Ryder take you through a fabulous day of performers including Laura Tapp, Europes No 1 Pink Tribute, Grenade and X Factor semi-finalist Misha B

7.30pm: Pre – Party at Strokers.  Celine legs it from the Block Party to host the warm up gig at Strokers Bar, Upper William Street.  Enjoy the BBQ and rest your weary bones for a few hours.

9pm:  PROFILE @ Crush87.  Limerick’s biggest night club goes exclusively gay for one night only!  DJ Ale on the decks in the main room with DJ Karen from The George spinning the classics in The Orchard.  This visual feast will have you spinning!  Early show begins in The Orchard at 9pm with Davina Devine and Victoria Secret.  Club @ 11pm.  Tickets €10

6pm-9pm:  Géilé @ Strokers Bar, Upper William Street.  A traditional Irish evening with a gay twist.  Come along and enjoy this chillout evening with live performance and of course lots of craic! 9pm:  Adele tribute Sarah O’ Kane sings out Limerick Pride 2014.  Ultimate chill out evening, just what you need after a week of being FABULOUS!