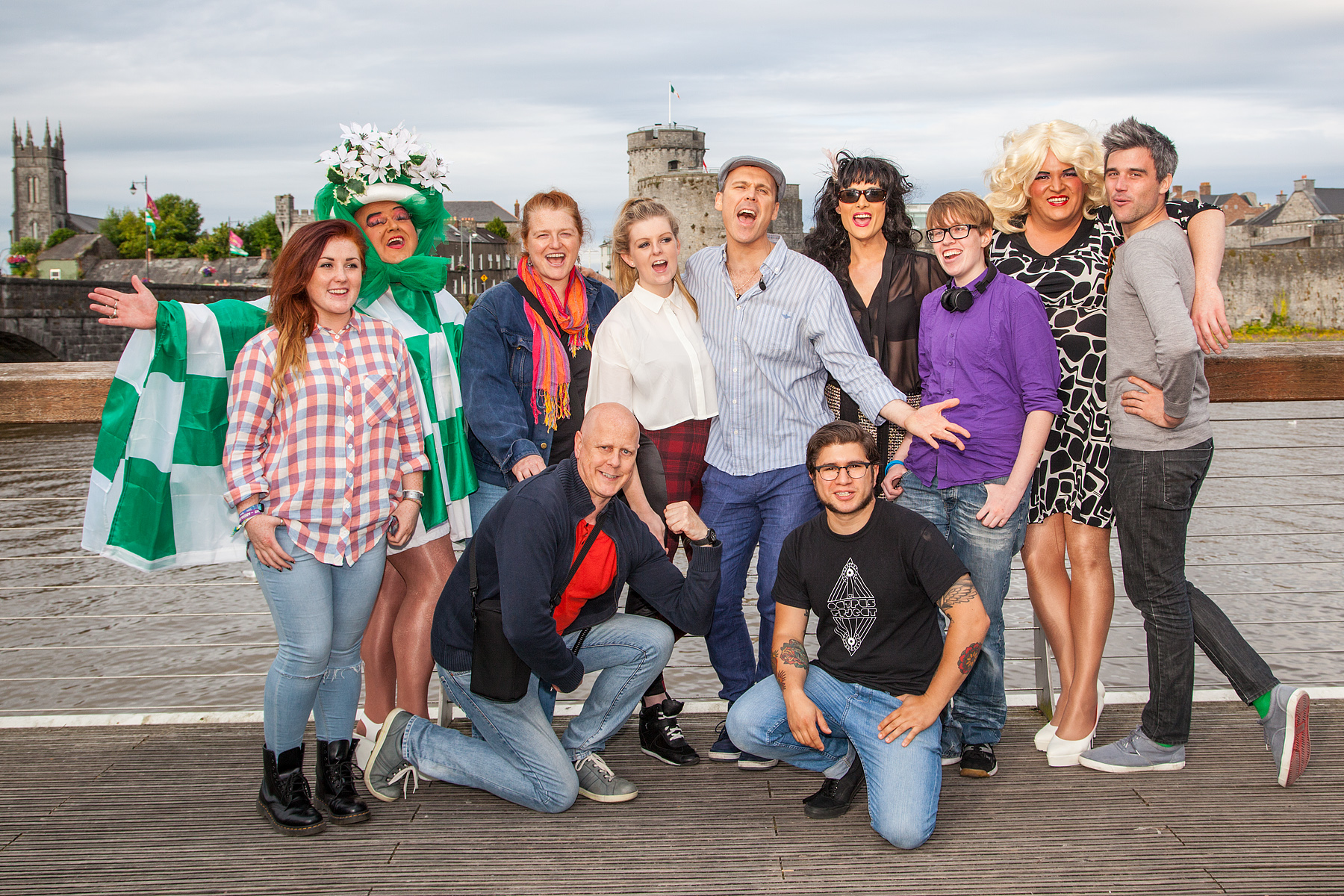 Limerick Pride Queens of Culture – I recently had the pleasure of producing the first in a series of comedy sketches called ‘Queens of Culture’ and this first episode is being used as a promo video for the upcoming Limerick Pride 2014. The premise was that Sheila Fitspatrick, a former Irish dancing champion, would Irish dance her way past various Limerick city cultural landmarks while our queens Madonna Lucia and Celine would make fun of her. Unbeknownst to the public however, this piece of comedy gold took a day of intense work by talented Limerick videographer Shane Serrano, the Queens Madonna Lucia, Sheila Fitspatrick and Celine and my production crew.

First on the agenda was the opening scene at the People’s Park. Luck was on the team’s side the entire day in terms of weather, but of all the different locations, this was the one that just wouldn’t have worked in the rain. There were some curious glances from passers-by while Shane was setting up the shot, but none as curious, bemused or plain confused as the looks the trio of drag queens attracted. So, the team, joined for the day by American blogger and travel writer Carole Rosenblat of DropMeAnywhere.com, kept the area clear, as Shane fired up the camera.

Next on the list was the scene at the Zipyard on Thomas Street as they sponsored our video. Special thanks should be given to the patient customers that had to wait outside and the employees who were all in good humour, while we halted the usual flow of business.

It was at the Hunt Museum that we learned that keeping shots clear at the park had been rather easy, and for a very brief moment it looked as a ‘Plan B’ would be needed, as the pavement outside the gate was fairly narrow. It turned out however that a dedicated team and genius videographer as Shane weren’t going to be stopped by such shenanigans as rush hour traffic – in fact, watching the video now, it seems that the street had almost been empty. So, after I pulled an Alfred Hitchcock strolling through my own production, Celine and Madonna sneered while Sheila danced her way through another scene.

By the time we reached our final location at the Treaty Stone, it was rather obvious that show biz was not as glamorous as our Queens could lead you to believe, nor as easy as Shane made it look. The last scene of the day however was rather production friendly as the streets were quiet and traffic didn’t have to be dealt with either. At last, a long day of work later, it was a wrap. The video is great fun, has had an amazing response and we are all very proud of it! Happy Limerick Pride!