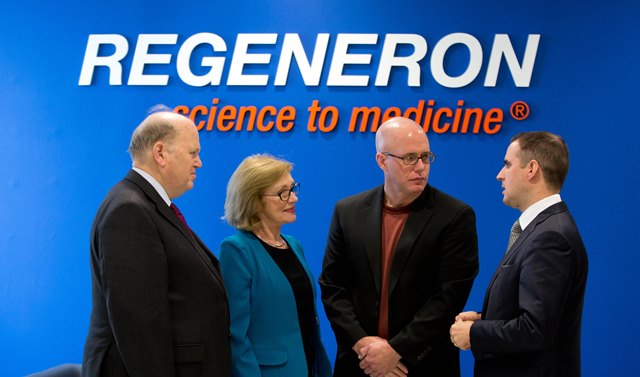 Limerick City and County Council has welcomed the announcement by American biopharmaceuticals firm Regeneron of additional growth and investment plans for its Limerick operation at its Industrial Operations and Product Supply (IOPS) campus at Raheen Business Park in Limerick.

Mayor of the City and County of Limerick, Cllr. Liam Galvin said Regeneron’s announcement of 200 new jobs and an overall investment of €350m is “representative of the confidence among investors in committing to their future operations in Limerick and the surrounding region”.

“The company’s operation at Raheen Business Park has breathed new life into the former Dell facilities which had been vacant since 2009 and is creating significant employment in the local construction sector. Regeneron’s commitment to Limerick has sent a clear message out to other potential investors that Limerick is an attractive location for investment,” said the Mayor.

Conn Murray, Chief Executive of Limerick City and County Council commented: “Regeneron’s operation in Limerick represents the company’s first major international expansion. The Council is delighted to have worked with IDA Ireland and others to ensure the right environment has been created to encourage and enable Regeneron to further expand its operation here.”

He continued: “Today’s announcement is particularly good news for Third Level graduates in Limerick considering the majority of employees already recruited by Regeneron are from Limerick and the wider Munster region, while a significant number of full-time employees are graduates of the University of Limerick and Limerick Institute of Technology.”

“Limerick City and County Council looks forward to working with Regeneron and any other company exploring investment opportunities in Limerick. The region has enjoyed numerous, significant jobs announcements during the past 18 to 24 months and it is important that we continue to promote the message internationally that Limerick is open, ready and willing to assist any multinational considering investment opportunities here,” added Mr. Murray.

Read more about Regeneron Pharmaceuticals on their webste here.