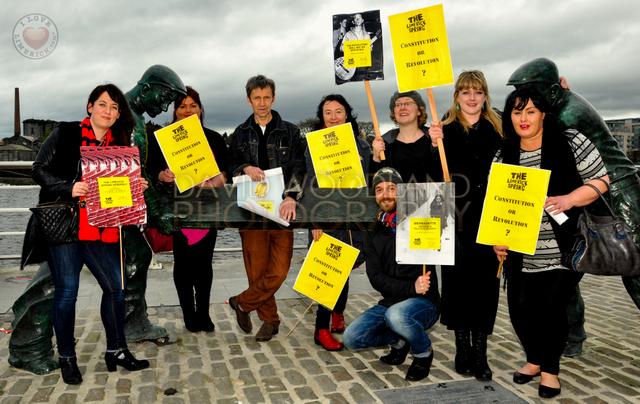 Limerick Spring Festival of Politics and Ideas is a Made in Limerick project supported by Limerick City of Culture and runs from 8th to 13th April. This is Limerick’s first festival of politics and will include debate, film, protest music, food and creative discussion. Confirmed speakers include broadcaster Vincent Browne, economist David McWilliams, Ear to the Ground Presenter Ella Mc Sweeney and comedians Eleanor Tiernan and Paddy Cullivan. We also welcome filmmakers Lelia Doolan and  Donnacha O Briain to present their work this week at two film screenings.

The festival kicks off in style this Tuesday April 8 with a film screening of Bernadette – Notes on  Political Journey with a Q & A with director Lelia Doolan.  Wednesday presents a night of music that inspired political change around the world with The Revolution Will Not Be Spotified upstairs in Dolans. This will see over 18 local musicians sing their own original protest songs alongside some renditions of some classics too.

On Thursday April 10 there are two events. First event begins at 2:30 in the Exhibition Hall of City Hall and will engage a group of citizens of all ages and backgrounds in a workshop on representation and democracy. On Thursday night you are invited to Salon Du Chat, hosted by Roisin Buckley in Fitto Cafe. This is a conversational cafe where your menu is filled with sumptuous morsels of conversation.

Friday night April 11 sees the return of David Mc Williams and Leviathan Political Cabaret back to Limerick for what will be a lively debate – Constitution or Revolution: Towards 2016. David will host a panel including Dr Peadar Kirby, Marie Louise O’Donnell, Liadh Ni Riada, Deirdre O’Shaughnessy of the Cork Independent  and Diarmuid O’Flynn of Ballyhea says no to name a few. There will also be some comedy from Abie Philbin Bowman and some satirical music from White Cholera.

Saturday April 12 will be an action packed day with an early start at the Limerick Milk Market where Ella Mc Sweeney will lead an expert panel to look at the Politics of Food. This event is organised in collaboration with the Limerick Community Grocery and will be a busy one.

Saturday afternoon sees a film premiere of Donncha O’Briain’s new film Peripheral Vision with a  Q& A with the director and panel of experts following the screening. This film follows a number of protest movements in Ireland over the last 2 years including Ballyhea Says No, Anglo Not Our Debt Campaign and the Occupy movement.

In what is sure to be highlight of the festival, Limerick’s own Vincent Browne will act as  Speaker of the House at the first ever Limerick Spring Assembly at the Crescent Hall, aptly situated beside the statue of Daniel O’Connell. This event invites 11 citizens of Limerick to put a motion to the House and we the audience will decide whether it gets passed and therefore included in The Limerick Spring Assembly Manifesto.

All events encourage very lively audience participation and none more so than the final event on Sunday April 13where comedians Eleanor Tiernan and Paddy Cullivan launch the first ever Speakers Corner here in Limerick. If you haven’t had your chance to have your say during the festival this is where you the citizen can just get up and tell the world what’s on your mind!  This event takes place on the corner of Thomas and Ann Street in Limerick city centre and will be followed by a comedy gig at 8pm in Dr Johns/ Blind Pig on Thomas Street.

Over 15 volunteers are involved in making this festival happen with a core group involved for the last 4 months. The Limerick Spring organisers estimate over 1000 hours of volunteering have gone into this festival and they hope that the citizens of Limerick will come out and support it this week.

Festival Coordinator Jennifer Moroney-Ward says “Limerick has a long tradition of political activism and has played a leading role in the development of the Irish state. However, many citizens feel disconnected from politics. This 5 day festival will invite citizens and guest speakers to delve deeper into the political structures and systems that influence our lives in 2014.”

With the festival now officially launched interested citizens are encouraged to log onto www.limerickspring.com and join in the debate and discussion surrounding the upcoming festival.