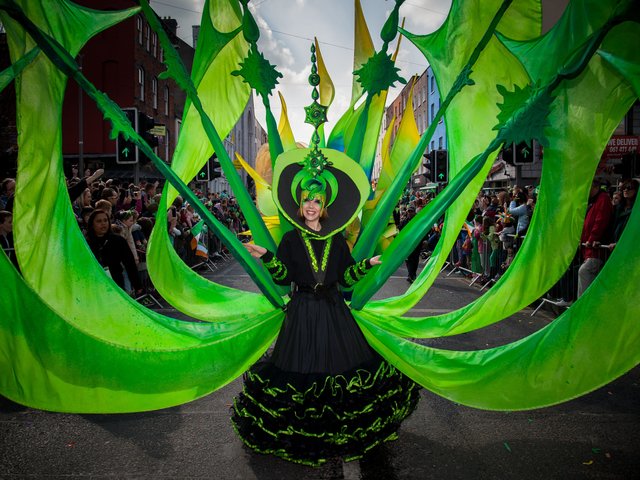 Limerick St Patricks Day 2016 celebrations kick off this Thursday, March 17 at 12 pm. Limerick city and county welcomes thousands of musicians and performers, as two of the biggest events of the year transform the City’s main thoroughfares into an open-air festival of colour and sound.

Coordinated by Limerick City and County Council in support of Limerick’s bid to host the European Capital of Culture designation in 2020, the Limerick St Patricks Festival begins with the annual St Patricks Parade which kicks off at 12pm this Thursday. The theme of this year’s celebrations is ‘commemorate’.

An estimated 80,000 people are expected to line the streets of Limerick City to watch more than 4,000 parade participants from 100 different community groups, companies, bands and sports clubs from across Limerick and Ireland.

The theme  ‘Commemorate’, seeks to promote Limerick’s legacy, its peoples and its places. Actor, director and playwright, Myles Breen is this year’s Grand Marshall in recognition of his outstanding contribution to the arts in the Mid-West region.

Pop duo Jedward have accepted an invitation from Limerick City and County Council to take part in this year’s Parade. Edward and John have strong family ties to Limerick, including their Grand Uncle Vincent Feeney, former Mayor of the city.

The St Patricks Festival continues from 12 noon on Sunday when 1,200 musicians from 18 groups, including a 280-strong marching band from the University of Missouri, take part in the 46th Limerick International Band Championship.

Each band will be afforded three minutes performance time in front of the review stand and all the bands will assemble for a jamboree in Arthurs Quay Park after they have performed.  This year’s adjudication panel includes six internationally respected judges, including four from the United States.

At Arthurs Quay Park, Mayor Galvin will present the Championship prizes which this year includes the inaugural Kenneally Jewellers Perpetual Trophy for the ‘Overall Parade Champion’. The theme of this year’s Parade is ‘Commemorate’.

“This coming week provides Limerick with an excellent opportunity to promote itself as a modern, thriving and vibrant city that we know and love to the rest of Ireland. It’s also a wonderful family occasion and creates a sense of community amongst the wider public while enabling people to very celebrate their Irishness and the country’s National Day. I want to congratulate the organisers and every group that is contributing to what will be an exciting week ahead of Limerick,” said the Mayor.

“The Festival delivers considerable positive knock-on effects for tourism, the local economy and Limerick’s reputation overseas. This week we look forward to welcoming even larger numbers of people into the City when the largest St. Patrick’s Day Parade outside of Dublin and Ireland’s only international band competition are held,” he added.

shows ambition, pride, energy and a unified plan to further harness the vibrancy seen in 2014.  St. Patrick’s Day is an opportunity to showcase Limerick as a creative city and explore and promote the distinctiveness and diversity that define Limerick, from the beavers to the marching bands. All the participants in the Parade emphasize the immeasurable value in understanding, accepting and celebrating our community. Limerick is a rich and rewarding place of multiple experiences and through the parade we celebrate the many cultures that make Limerick a vibrant place.”

“The theme ‘Commemorate’ which is defined as ‘recall and show respect for or to mark or celebrate by doing or producing’ is a fitting way for Limerick to think about hundred years since the 1916 Rising,” she said. “2016 is seen as a year of reflection and engagement of the key historical moment that was the Easter Rising and the journey towards independent statehood. States come into existence by people. Parades happen because of people.”

“Let us celebrate on our national holiday,” concluded Ms. Deegan.

Meanwhile, photography enthusiasts are being offered an opportunity to win €1,000 worth of Canon photographic equipment by submitting photographs capturing the St Patrick’s Day Parade, the International Band Championship or Riverfest Limerick. Sponsored by Whelan Cameras and Canon, and supported by Limerick 2020, Scouting Ireland and Limerick City and County Council, the competition features a deadline of May 9, for submission of entries.

So be sure to join the crowds on Limerick’s busy streets this Thursday, March 17 for Limerick St Patricks Day 2016 celebrations in honour of our amazing country and traditions.