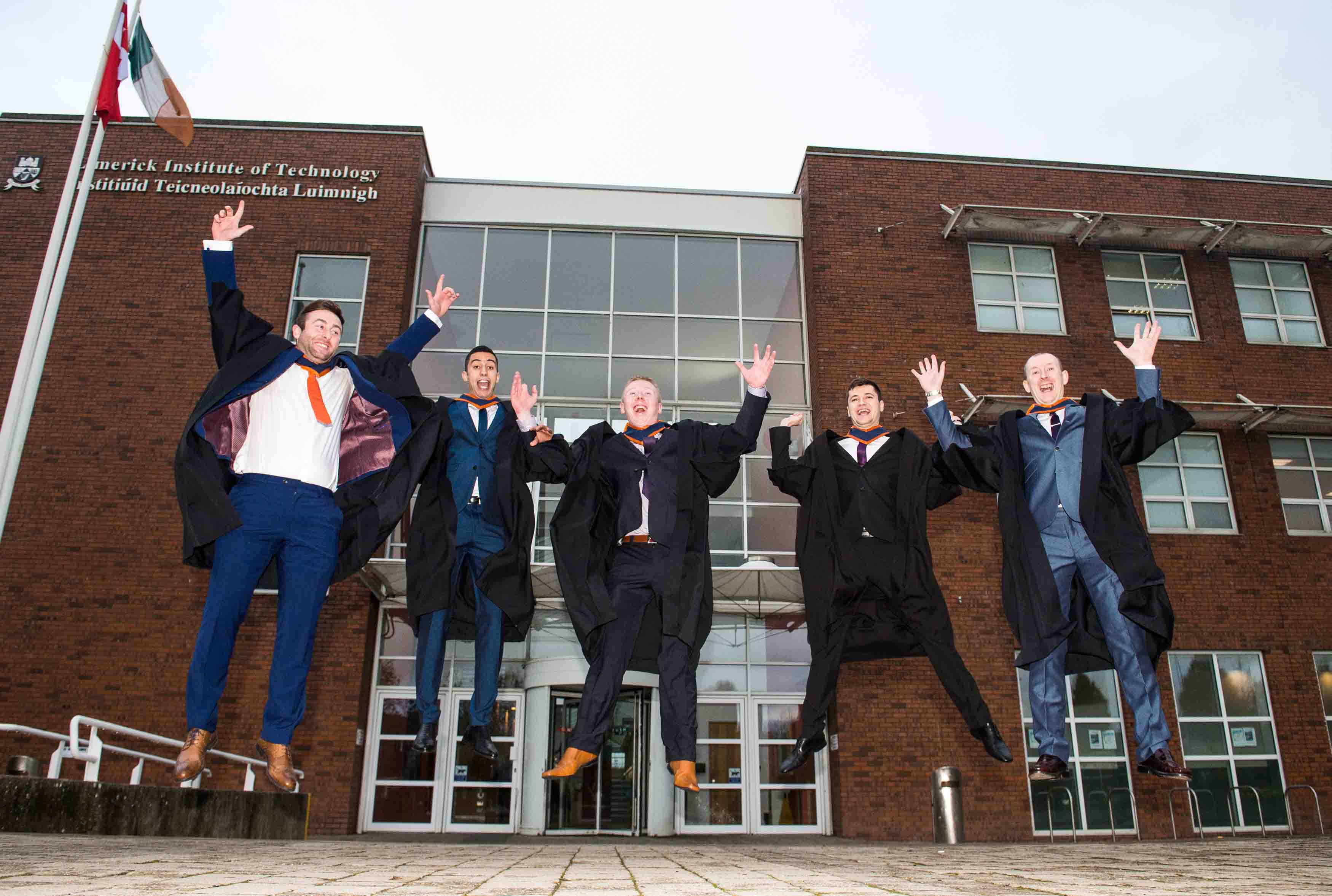 LIT in need of investment in facilities and infrastructure

Richard Lynch
Pictured at the Limerick Institute of Technology conferring ceremony are Industrial Automation and Robotic Systems graduates, from left to right, Stuart Lipper, from Kileely, Limerick, Badr Jdair, from Ennis, Co. Clare, Philip Brett, from Thurles, Co. Tipperary, Dejan Macura, from Ennis, Co. Clare, and David Cooney, from Drumcondra, Dublin. Picture credit: Diarmuid Greene/Fusionshooters
The President of Limerick Institute of Technology (LIT), Dr. Maria Hinfelaar, has warned LIT in need of investment, and that without investment in facilities and infrastructure, LIT will struggle to meet the growing demand for skilled graduates as the pace of job creation reaches new levels in Limerick.
Speaking today at the opening ceremony for this year’s conferring of 1700 students at LIT, Dr. Hinfelaar, president of one of Ireland’s fastest-growing third level institutes, said that LIT is now “incredibly tight for space and this year the problem is even more acute.”
Dr. Hinfelaar was speaking against the backdrop of over 6,000 new jobs having been announced for Limerick in the past two years.  She said that LIT needed “a step change in capital funding” because of heightened industry demand for skilled graduates brought about by the success of the strategy to bring jobs to Limerick.
In keeping with this, Dr. Hinfelaar also revealed that within one year of graduation, 90% of LIT graduates are in employment, further study or volunteering, with only a small minority travelling abroad for employment.
She stated, “LIT now desperately needs investment in our facilities across all our campuses: the main campus in Limerick, our School of Art and Design in the city centre, our Thurles and Clonmel campuses.
“We have a wonderful Campus Masterplan called LIT 2030 – Our Places. We have been able to implement some of it to make necessary improvements, but we now need a step change in capital funding to address the need for additional space and state of the art equipment, and carry out the full LIT masterplan.
“It is very simple: we have a growing young population coming through the second level system, and we have a growing economy. The Mid-West region is really developing and we have had 6,000 new jobs announced in the past couple of years in Limerick alone. These are all positions that require third level qualifications, and there will be many more jobs created indirectly by the expansion of all these companies.
“We know from our engagement with the agencies and with the companies themselves that there is even more on the horizon, and that there will be new emerging small businesses too in all sectors of the economy.
“This is all very good news, but those jobs announcements make two key assumptions: that there will be enough graduates coming out of higher education, and that the companies will be able to recruit local people.”
Dr. Hinfelaar continued:  “The harsh reality is that without investment in quality infrastructure and an increased footprint, LIT will struggle to meet the rising demand from students and the skills needs of industry and wider society. What will then happen is a shortage of skilled graduates to fill the jobs that all these companies are now announcing. That moment is not too far away.
“So this call for government funding is not only about LIT, it’s about actual jobs for the region. We can still fix it but we must act quickly. We have talented students, excellent programmes and wonderful staff, as well as exciting possibilities in the society we now live in but we have to face up to the reality that our facilities are not keeping pace.”
Referring to LIT’s ‘First Destinations Survey’ of last year’s graduates, Dr. Hinfelaar said that of the LIT graduates who the sectors where LIT are getting their jobs in a wide range of sectors, including manufacturing and engineering, the pharmaceutical industry, construction, business and finance, the arts, IT, social care and healthcare, hospitality and tourism, retailing and sales, and the media.
Of those graduates who secured employment, 93% of the posts were in Ireland, with only 7% moving overseas. “That picture was very different not so long ago. If one in every 14 of our graduates is now taking up job opportunities abroad I think that’s a pretty healthy number, and given where the jobs market in Ireland is now going there should be plenty of scope for them to return at some stage if they wish, with some excellent international experience under their belt,” Dr. Hinfelaar added.
The survey also revealed that LIT students indicated they would do the same course again and they were very satisfied overall- again, to a higher extent than in other institutions.”
Visit the LIT website here
Check out the LIT Facebook page here and Twitter here
Read more about Limerick colleges here