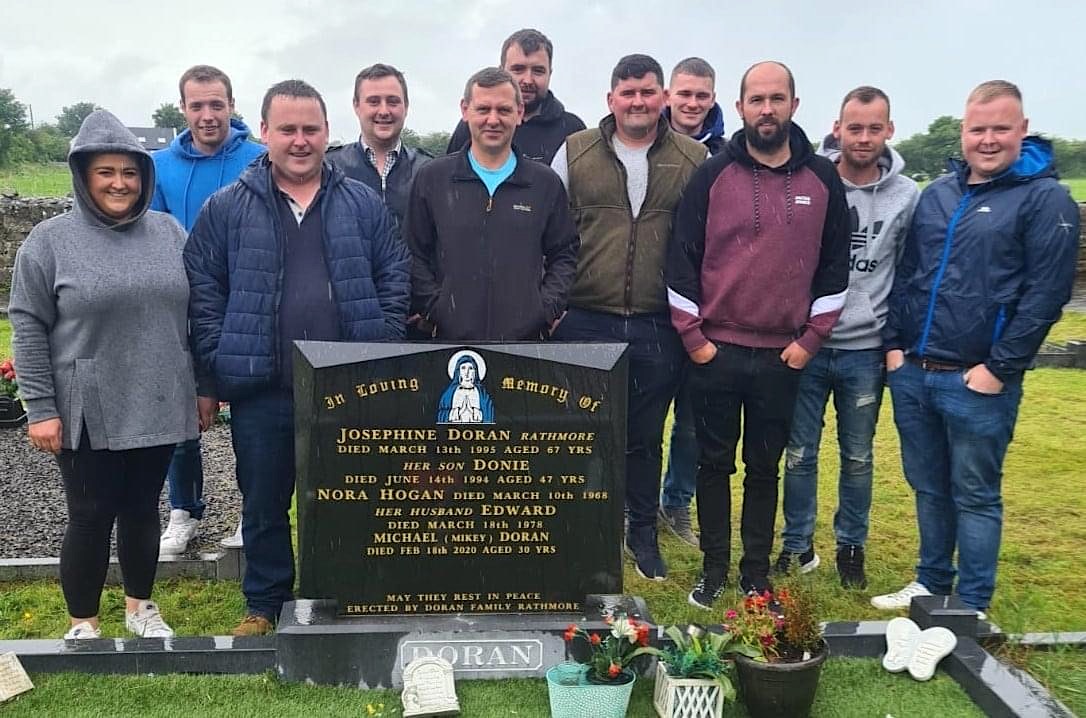 €16,000 raised in honour of Mikey Doran for the Irish Heart Foundation

Mikey Doran –  Family and friends pictured above at Mikey’s grave.

€16,000 raised in honour of Mikey Doran for the Irish Heart Foundation

Family and friends of Limerick man Michael (Mikey) Doran travelled to all 32 counties in under 24 hours in his memory.

Mikey Doran, who had just turned 30, suddenly passed away in his sleep on February 18, 2020, after suffering from cardiac arrhythmia, which causes the heart to beat irregularly.

Mikey’s brother Kevin Doran from Bruff and his friends wanted to do something in honour of Mikey, as well as helping the Irish Heart Foundation. They decided on driving through the 32 counties in 24 hours, which they managed to do in 16 hours.

The group who set off on the journey was made up of Mikey’s brothers Kevin and Donal, Louise Roche, Tommy Shortt, Philip Bray, Pat Dooley, Geoff Bevan, Dan Gallichan, Michael O’Donovan, Christopher Crotty and Patrick Kirby.

A GoFundMe was set up for the event, which was first planned to take place in April 2020, but due to Covid-19, it was held it off until last July.

By starting at Mountcollins GAA Club, they managed to hit Cork, Kerry and Limerick within minutes of each other.

The group travelled to all 32 counties in just over 16 hours in memory of their brother and friend.

The GoFundMe, which was organised by Kevin, Donal and Tommy, said, “We hope to raise as much as possible for the Irish heart foundation and keep his memory well and truly alive,” and they managed to raise over €15,000 for the Irish Heart Foundation.

Including other donations outside of the GoFundMe, an amazing €16,000 was raised and given to the Irish Heart Foundation in Bruff in honour of Mikey.

In May last year, Paul Ryan, who was a friend of Mikey’s, ran 10km every day of the month to raise money for the Irish Heart Foundation.

He was inspired by a man in England who aimed to walk 150km in the same month while he was minding dogs to raise money. Paul had taken up running during lockdowns and decided to put his hobby to good use.

Every day, he would run 15 laps of the Shelbourne Park, which adds up to 10km.

His GoFundMe, which is now closed, raised over €5,000 for the Irish Heart Foundation.

Mikey had previously managed The Library nightclub before moving to The Black Rabbit before becoming a salesperson with Eir.

He is sadly missed by his partner Hannah Laffan, his family and his friends.

For more information on the Irish Heart Foundation go HERE

For more stories on the Irish Heart Foundation go HERE

Three Counties Cycle in aid of Down Syndrome Limerick