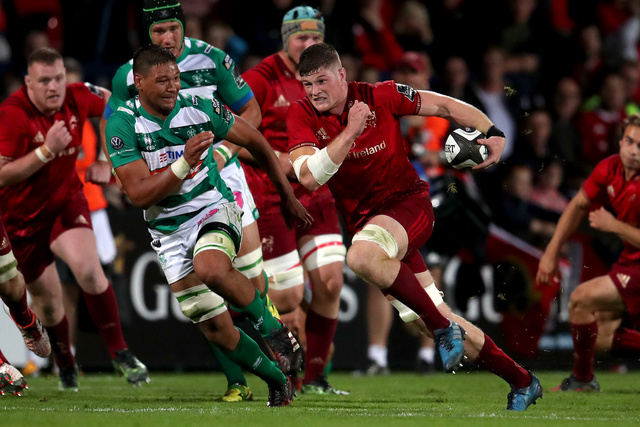 The Reds’ South African lock Jean Kleyn had the perfect return from a long term injury, scoring Munster’s first try of the season in the first ten minutes of the game.

Munster continued to dominate Benetton early on and they had a second try not long after when Tyler Bleyendaal scored.

Munster’s third try in the first thirty minutes came when a nice bit of skill from Alex Wootton sent his fellow winger Darren Sweetnam over the line.

Wootton himself bagged the bonus point try just after the half hour mark in what was the play of the game. Andrew Conway took the ball down and broke through a tackle before starting a beautiful piece of passing play between Tommy O’Donnell, Sweetnam and Bleyendall eventually ending with Wootton scoring in the left corner.

Conway’s man-of-the-match form continued and was rewarded with a try four minutes later, running a hard line and taking a sneaky pass from his back three counterpart Sweetnam.

Not enjoying his best of nights off the tee, Bleyendaal slotted just one opening-half conversion and Munster led 27-3 at the break.

The second half was a much more quiet affair than the first. Working through the phases, Kleyn secured his brace on 49 minutes and that would be it in terms of scores for the men in red.