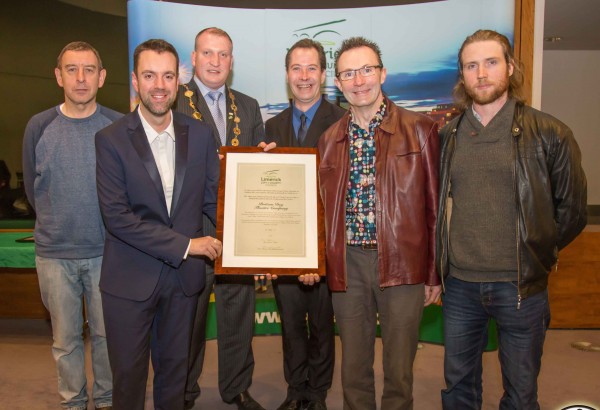 Myles is now as stated on his official scroll, an official formal Cultural Ambassador for Limerick. Likewise, Liam O’Brien of Bottom Dog accepted similar honour for his company shared with Myles, Mike Bourke, John A Murphy and Pius McGrath.

This is in recognition of Myles contribution to the arts and theatre in Limerick, and for being a wonderful ambassador for the city over the years, a council spokesperson said.

On top of this, Myles – a former Limerick Person of the Month winner – was named Best Actor at Origin’s first Irish theatre festival in New York.

He referenced long years of activity in the arts : pioneering plays, producing shows, working in film and concerts and with multiple local and national corps.

Bottom Dog were also recognised on the night for its : “contribution to the arts in Limerick, serving as cultural ambassadors for Limerick both here and abroad and for their awards success at Origin’s First Irish Theatre Festival in New York”.

Click here for more information for ‘Sleeping Beauty’ in the University Concert Hall of Limerick.
You can find more information on Myles’ Twitter and Facebook pages.
For more related stories by I Love Limerick, click here.

Photos by Jonathan Baynes for I Love Limerick. All rights reserved.