By Richard Lynch on January 2, 2019@richanthon 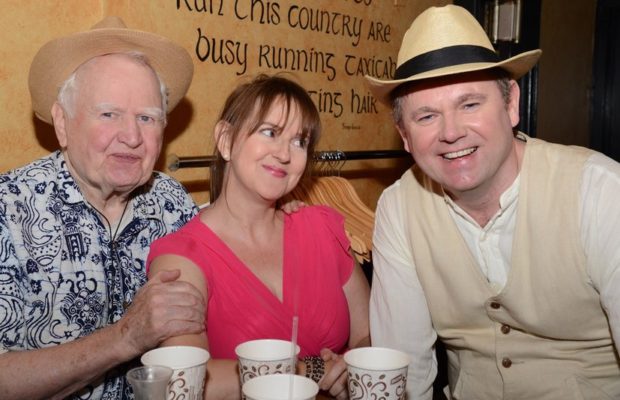 Under the artistic direction of George Heslin, Origins 1st Irish Theatre Festival is devoted to introducing New York audiences to the stunning array of work and perspectives emanating from Europe. 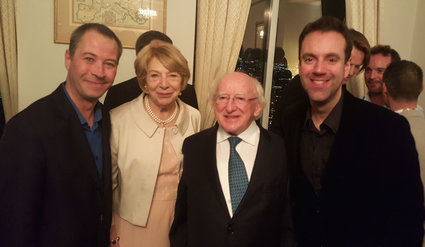 Actor and playwright Myles Breen pictured with Sabina Coyne, President Michael D Higgins and director Liam O’Brien in 2015 when he won the best actor award at Origin’s 1st Irish Festival in 2015 where he showcased his hit one-man play ‘Language UnBecoming A Lady’.

George, a Limerick native said, “Origin’s 1st Irish showing is a highly curated festival that mixes brand new and recently acclaimed productions and special projects from both sides of the Atlantic.”

Since its founding in 2007, the Festival has been recognised for its focused size, and emphasis on audience engagement through main stage productions, parties, panels, and workshops.

George adds. “Our ‘Next Generation and Breaking Ground’ series have proven to be a launch pad for new projects developed collaboratively by artists from different cities, that have gone on to further success and acclaim.”

A major highlight of this year’s Festival is the American premiere of Limerick man John Breen’s celebrated drama ‘Alone It Stands’. Limerick The award-winning playwright and director revisit the 1978 David vs. Goliath win of Limerick’s Munster’s rugby club over New Zealand’s All Blacks rightly considered one of the best teams in history.

Another Limerick play making its American debut at the Festival is Ann Blake’s Award-winning ‘The Morning After the Life Before’, a story based around the Irish Marriage Equality referendum. Performed by Ann Blake and Lucia Smyth, the show is a personal, entertaining tale of weddings, ‘coming out’ and arguments over who takes out the bins. Be prepared for music, cake, and equality.

The Origins 1st Irish Theatre Festival 2019 takes place in a number of distinguished venues across New York City representing fifteen contemporary Irish writers and six mainstage productions originating from Belfast, Derry, Dublin, Cork, Limerick, Queens, and Manhattan. Among the productions, five are US premieres; one is a world premiere. Fifteen contemporary Irish writers are represented with work in performance.

This year’s Origin’s 1st Irish culminates in a Closing Night Ceremony on Monday, January 28, staged at Rosie O’Grady’s Manhattan Club, 800 Seventh Avenue, in the heart of Times Square. There the Best of Festival Awards, chosen by the festival’s blue-ribbon panel of judges (whose names will be announced soon), will be handed out.

Origins 1st Irish Theatre Festival 2019 kicks off on Wednesday, January 9 at 6:30 pm at its Official Launch Party, welcoming Festival participants and partners at The Irish Consulate.