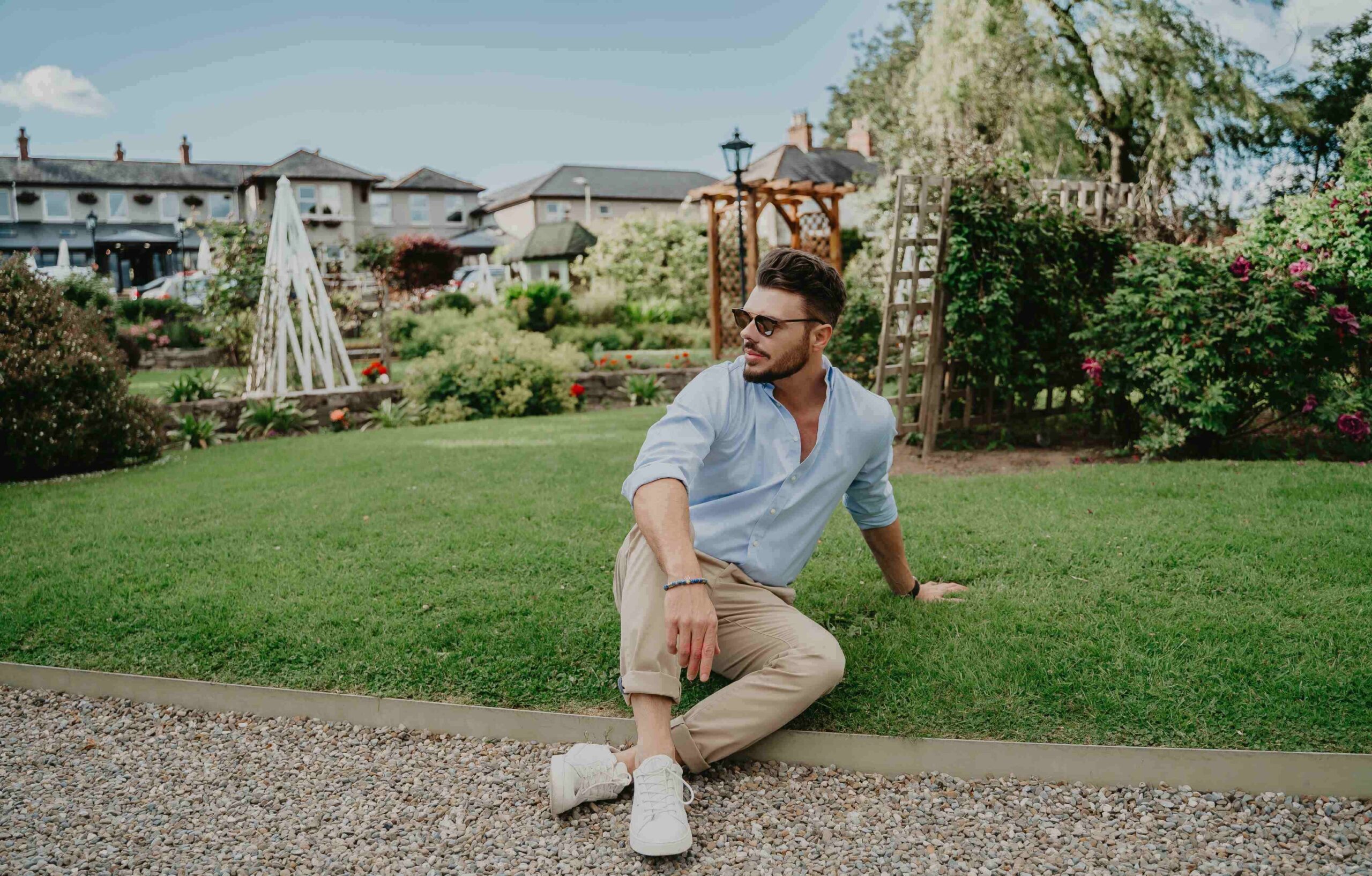 Patrick McLoughney is a style influencer and former personal shopper for Brown Thomas.

Patrick McLoughney is one of Ireland’s leading men’s fashion and lifestyle bloggers. He’s a former personal shopper for Brown Thomas, a male model, a qualified psychotherapist and has written for a host of Irish newspapers including the Irish Independent, the Limerick Leader, the Kilkenny People, The Midland Tribune, The Longford Leader and The Leitrim Observer. He’s been writing about style, grooming, dating, haircare and a variety of other topics relating to the life of a modern man since 2016. As a model and influencer he has worked with brands like GANT, Barker, Jack & Jones and Littlewoods and was named Hi Magazines Male Model of the Year in 2017 and Most Stylish Man in 2019. As an actor he has appeared in TV shows such as Irish Pictorial Weekly, The Mario Rosenstock Show and Fair City, movies such as Love Rosie and Penny Dreadful and TV commercials for Aer Lingus and PlayStation. Patrick McLoughney has also been featured on radio shows like The Jenny Greene Show on 2FM and Spin Talk on Spin South West giving dating and fashion advice for men.

Some people might be shocked to find out that I grew up on a farm and spent my summers milking cows and feeding claves. My father was a dairy farmer so while I’m well known for all things fashion and style, I’m also a dab hand with a four-grain fork when I need to be.

My childhood was tough at times as my mother became ill when I was six years old and our family had to cope with that illness for the rest of her life until she passed. As anyone who’s grown up around family illness can attest to, it brings a lot of pressure and stress to your daily life and can shape the person you grow up to be. I’ve always chosen to take the positives from it though and I’m grateful for the resilience and strength I gained during this period that I’ve been able to call upon during testing times throughout my life.

What got you into modelling? What was the inspiration behind it? Where does your sense of style come from?

I guess I started kind of late because when I was younger I played on a lot of sports teams and would have been a lot more bothered about what other people thought of me – especially my friends and teammates – so the few modelling jobs that I did, like tourism brochures and college prospectuses, I kept on the down-low. It wasn’t really until my mother passed away that the way I approached things and thought about things changed and I decided to stop worrying about what other people expected of me and start doing the things I’d always said: “I’d love to do”. So I left my job in Bank Of Ireland and returned to college to train to become a psychotherapist and started taking more acting and modelling jobs. I signed with an agency and the rest, as they say, is history.

As far as my sense of style goes, I don’t really have an answer to this as my style can vary from one day to the next depending on my mood or where I’m going. For me style is confidence, style is expression. Whenever the term “style” is used, it most commonly refers to one’s fashion or outer appearance. But I feel that style is much more than your haircut, or coat, or shoes. Style is the total combination of the way you dress, talk, move your body, or do anything for that matter. Simply put, it’s how we express our inner being outwardly. This includes all of our thoughts, emotions, interests, and values. Everything on the outside is merely a reflection of what’s on the inside.

What do you love and dislike about being a social influencer? What is your overall message on social media?

I love having a voice that can reach thousands and I take that very seriously and try to be responsible with the message I put out on social media. I have a love-hate relationship with the term “influencer” because I think that if you have the ability to reach a large audience and influence people then you should do more than just try to convince people to buy products or advertise things. I love being able to promote charities and help people as well as promote brands and help Irish businesses to grow. I think I dislike the same things that most people dislike about social media. It can be easy to forget that social media is a highlight reel and start comparing yourself to others based on the life they portray on social media. A wise woman once told me “comparison is the thief of joy”.

As a model, it would be working for GANT and being featured in their summer magazine. In my life, it would have to be helping a client make a major breakthrough while working as a counsellor in the Irish Wheelchair Association.

Do you think being a male influencer different from being female? Are there different expectations for influencers based on gender?

Yes, I do in the sense that the expectations are a lot lower of the men because, for the most part, we are a lot less popular. I think rather than getting hung up on expectations and comparisons, the key is in finding your niche. Regardless of gender, you need to focus on what you like and what you know and make that your thing. I’m a male fashion influencer and one of the bigger ones in this country. However, if I compare myself to the women in that same section of social media I’m not even at the races.

Is there anything about yourself you wish people knew / would focus on rather than just being an influencer?

I don’t think so. I try to be very honest on social media so those that have followed me for a while will know my story and know what I’ve done. I’ve accomplished a great many things in my life and aim to achieve a whole lot more. The stuff I put on Instagram will always get the most attention but if you head over to LinkedIn you’ll discover that I have three degrees and I’m currently working towards a fourth, I’ve written for the biggest newspaper in the country and I’ve sat on a board that grants accreditation to new colleges in Ireland.

Have you faced any struggles getting to where you are now?

Of course. There’s an old saying “enthusiasm is common, endurance is rare”. I’ve lost a lot over the years including both parents, a close friend to suicide and my job during the first lockdown. But I refuse to lose my enthusiasm and I’ll never give up on myself.

Any advice for your younger self or young people who want to be like you?

I’ve always said that if I ever had the opportunity to speak to my younger self I wouldn’t impart any advice, I’d simply apologise and give him a hug. I was very hard on myself for a long time, especially when I was younger. I’d go so far as to say that the biggest bully in my life growing up was me. I’ve learned to not be so hard on myself and not to be my biggest critic but I’d love to be able to speak to my younger self and put an end to that critical voice a lot sooner.

Right now, I’m working on a project that will hopefully be the biggest thing that I’ve ever done. I’ve been doing this whole social media thing for a number of years, so I feel that now is the time to try to level up. So, I hope that in five years that I’m enjoying the success of this endeavor but more importantly I hope I’m healthy and happy.

I love the people of Limerick. I’ve lived in other parts of Ireland, but I’ve always found my way back to Limerick because I miss it when I’m gone. Limerick has been very good to me and will always have a special place in my heart.