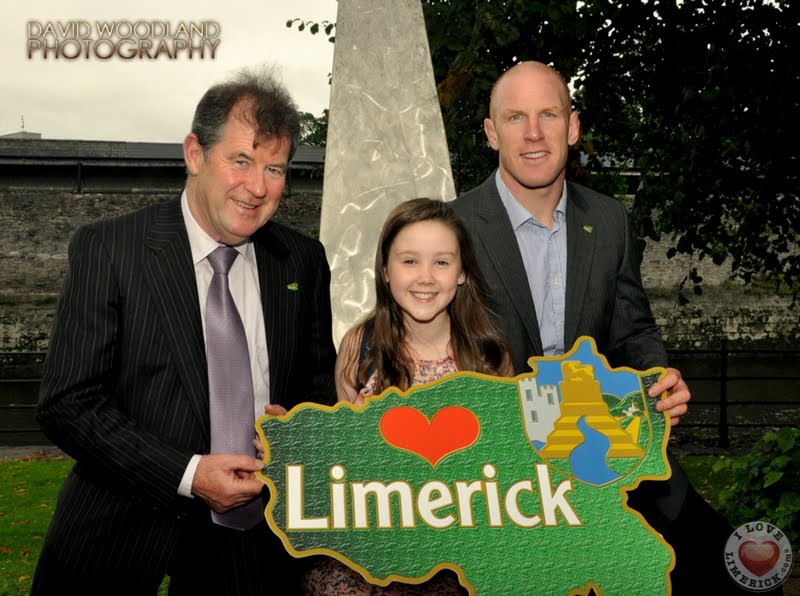 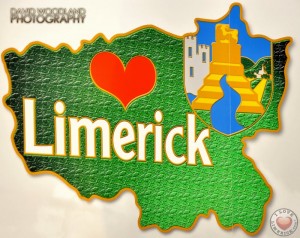 Paul O’Connell and JP McManus officially launched a lapel pin to promote Limerick and pride in the city at the Hunt Museum, Limerick.

‘Design a lapel pin’ was a new category in the Going for Gold initiative, a campaign which is sponsored by the JP McManus Charitable Foundation to get communities and businesses in Limerick together to clean up the city. The lapel pin competition invited Limerick students to design a lapel pin that instils pride in Limerick. The seven week competition was open to all primary, secondary and third level students in Limerick City and County.  The overall winning entry was from Anna Kinsella, an 11 year old student at St Patricks Girls National School.  Anna was among 700 entrants to the competition.

Anna Kinsella (competition winner) was joined by Paul O’Connell, JP McManus and Mayor Kathleen Leddin to launch the pin on the lawns to the rear of the Hunt Museum and afterwards many well known Limerick faces stopped by to show their support for the initiative.

Essentially, this was JP’s idea and the reasoning is to demonstrate one’s pride in your city, but by wearing it also showing responsibility to do right for your city i.e talk it up and be positive about it and also to be more conscious of improving the city in whatever way an individual can/or collectively. The Going for Gold Competition is a huge expression of that. Also the competition aimed to promote the ideas and creativity of young people and the Lapel Pin Competition was a great way to allow them to express their thoughts and ideas and also help them to recognize and take pride in ‘their city and county’.

The lapel pin is available free of charge in selected locations throughout the city including the Hunt Museum and the Limerick Leader.

The Limerick Going for Gold campaign is supported by the JP McManus charitable foundation.

“This winning pin represents all that is positive and inspiring about Limerick and is being launched to support the wider objectives of the Going for Gold campaign. In addition to promoting a cleaner brighter Limerick, we would like to inspire pride amongst the community,” said JP McManus, who added that he hopes Limerick people will wear the lapel pin with pride. “From grass roots level upwards, we are starting to change the way people embrace our city and we very much want to encourage people in Limerick and beyond to wear the pin with pride,” he said.

“Those who wear this pin can do so with pride knowing that they are living in a city that is moving forward with one eye on its record as a progressive and welcoming city and the other on a very bright future for the city and its residents,” she said.

To view photos of Going For Gold Final 2013 go HERE.

To view photos of Going For Gold Launch 2013 go HERE.

To view photos of Going For Gold Final 2012 go HERE.

Photos by David Woodland for www.ILoveLimerick.com. STANDARD DISCLAIMER – Do not copy, cut, alter,print or use in any way without express permission. Sharing of images online by David Woodland in no way licences the use of said images without the express agreement from David Woodland or representatives.