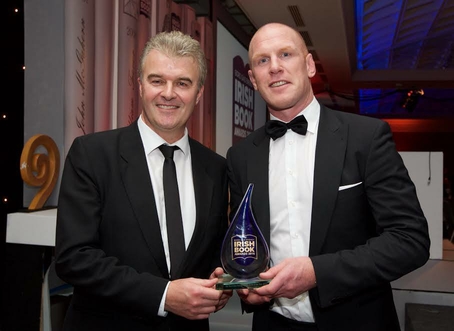 The Bord Gáis Energy Irish Book Awards are a set of industry recognition awards set up by a coalition of Irish booksellers in 2007. The over-riding motivation behind the awards is to celebrate the extraordinary quality of Irish writing, to help bring the best books to a wider readership annually, and to promote an industry under severe competitive pressures.

Paul O’Connell was one of three Limerick authors nominated for the Bord Gais Energy Book Awards 2016.

The autobiography was co-written by former Limerick Leader editor Alan English and was published by Penguin Ireland. English joined as Paul wins Irish sports book of the year award 2016.

Paul is said to have written the book over the course of seven years and was up against five other books in the category – Blood, Sweat & McAteer by Jason McAteer; Coolmore Stud, Ireland’s Greatest Sporting Success Story by Alan Conway; My Life in Rugby by Donal Lenihan; Out of Control – Cathal Mc Carron, and Win or Learn by John Kavanagh.

The book was released in October and went straight to the top of the bestsellers list receiving excellent reviews followed by a well-deserved win at the Bord Gais Energy Book Awards 2016.

An array of famous faces joined Paul O’Connell at the awards on Wednesday night including Graham Norton, Cecelia Ahern, Roddy Doyle and more.

The Bord Gais Energy Book Awards will be aired on RTE One Saturday November 19 at 11:15pm.

The inaugural Capital Limerick event is a huge success