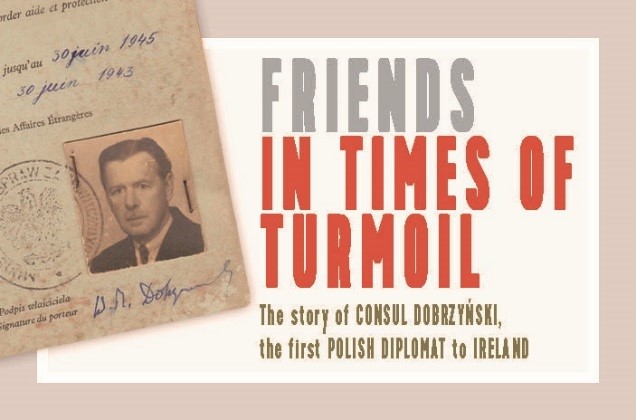 The PolskaEire Festival 2017 is a nationwide, annual festival celebrating Irish-Polish friendship. This is a touring exhibition and will be presented in Limerick between May 18 to June 16. This annual celebration of Poles and Irish living together to strengthen mutual relations celebrates diversity and integration. in The Glazed Street, Limerick City and County Council, Civic Buildings, Merchants Quay.

Last years PolskaEire Festival saw the screening of ‘Solidarity according to women’ in Limerick College of Art & Design on George’s Quay. This film screening was followed by a panel discussion with the directors and screenwriter Marta Dzido and Piotr Sliwowski.

The 2017 PolskaEire Festival will see a historical exhibition ‘Friends in Times of Turmoil’. This exhibition is based on the life and career of Consul-General Dobrzyński. It will reveal how the Polish nobleman initiated diplomatic relations and long-lasting friendship between the young states of Ireland and Poland in the 20th century.

Through the innocent gesture of inviting President Douglas Hyde to a soccer match between Poland and Ireland in 1938, Consul Dobrzyński – otherwise a very popular and admired personality in 1930s Dublin – unwittingly caused chaos on the Irish political scene.

From the moment he set foot on the Emerald Isle, Dobrzyński became deeply infatuated with Ireland and her people. In total, he spent 34 years in Ireland, of which 25 years were in diplomatic service, making him the longest-serving foreign diplomat in the history of the Irish State.

Similar to last years PolskaEire Festival, there will also be a multicultural event run by the Bank of Ireland on O’Connell street on Friday, May 19 in their Bank of Ireland Workspace.

The  PolskaEire Festival exhibition, ‘Friends in Times if Turmoil’,  is in English and admission is free so all are welcome to come along and embrace this wonderful uniting of cultures and get involved in our PolskaEire culture.

PolskaEire is presented by the Polish Embassy in Dublin in cooperation with the Limerick City & County Council and the Polish Art Festival.

For more on the Polish Arts Festival click here

Keep up to date with local Polish news and events here