Putting Grandparents in the Picture in St Michaels Infant School 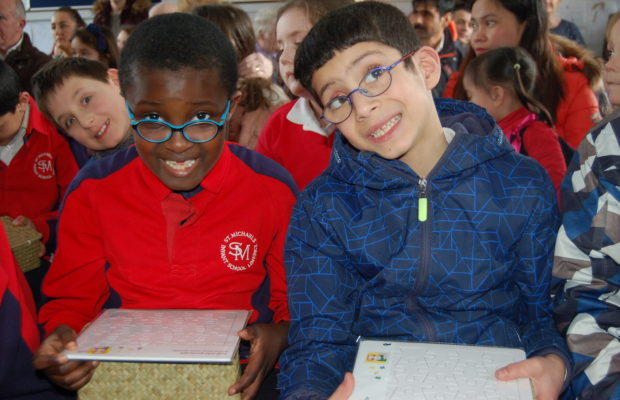 Putting Grandparents in the Picture in St Michaels Infant School

Local Limerick man Pat O’Neill is helping to shape future generations with his work in St Michaels Infant School. Previously, Pat has had a huge role in the Limerick letter-writing initiative, as well as the portrait initiative that is circulating around primary schools. Now, however, he has found a way to marry the two with his Putting Grandparents in the Picture initiative.

Now through his work with Christabel Lenihan and school Principle Tracie Tobin, the initiative has had a huge success in St Michaels Infant School. The initiatives aim was to get the students to work on creating both a portrait and a short letter of either one or two grandparents. All work was done in the school, with as little adult interference as possible, as the aim was for the children to create as an authentic and personal as possible.

After weeks of students creating their portraits and letters, the school hosted the grand reveal, where both parents and grandparents attended. The rooms were filled to the brim, as it turned into a huge event, with parents bringing food and spending time looking at everyone’s portraits. The portraits were then judged by two outside judges, one of them the incredible Roisin Meaney.

Although there was only supposed to be one winner, the judges were only able to narrow it down to two. The winning portraits were awarded by having their grandparents portrait done by a professional artist, with the lyrics of their favourite song.

School principle Tracie Tobin said about the event “It’s very effective to bring the grandparents into the equation. We could see how important the grandparent’s role in a child’s life is.”

Since the event took place school principle Tracie and Pat have been working to put together a book of all the portraits and the letter that went alongside them for each of the students to have as a keepsake, which will be coming out next week.

Watch the video of the children’s work for Putting Grandparents in the Picture here;

For more information about the Limerick letter-writing initiative, go here.

For more information on Pat’s Putting Grandparents in the Picture initiative, go here.