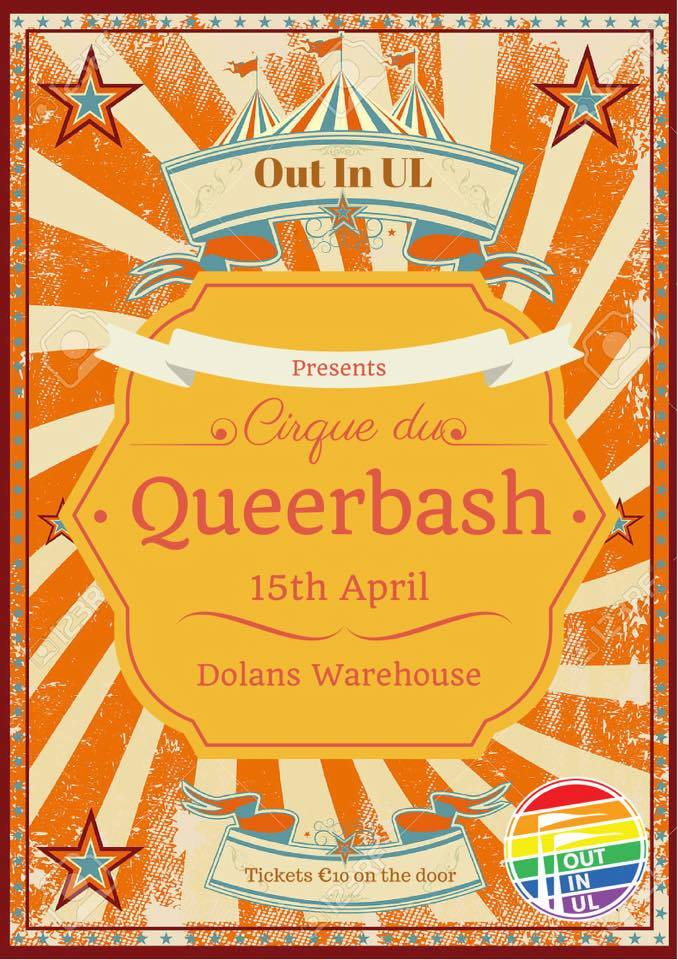 This year for Queerbash XIII queers go to the circus, with Cirque Du Queerbash. Queerbash 13 will take place Friday April 15 at Dolans Warehouse. Queerbash is Out in UL’s largest showcase event, and also the longest running event in University Limerick history, and is now in its thirteenth year! Queerbash was founded in 2004 by Paddy McHugh to bring the queer community and wider community together. Each year, Out in UL will over a non-queer venue, and turn it queer for a fantastic night of fun and entertainment. Dolans Warehouse has played host to Queerbash for the last couple of years. The purpose of Queerbash is to tackle homophobia by reclaiming the word ‘Queerbash’ and making something positive of it to empower the queer community. Since then beginning in 2004 Queerbash has become one of the most prolific events in the queer calendar.

Over the last few years Queerbash has grown considerably and has been hosted in venues such as Baker Place, Tatlers, Bentleys, and Dolan’s Warehouse. Each year has a theme, previous themes include déjà vu, 7 deadly sins and gothic to name a few.  In 2012, Queerbash won Best Society Event award for Queerbash 8, which went with a gothic theme. Queerbash 9 took a Go Native approach with a tribal theme. For the 10th anniversary of the event Queerbash 10 theme was “Let The Eat Cake” with the first 100 people in the door getting free cake, to celebrate this huge milestone.

Queerbash XII theme is circus, people are encouraged to come along and dress for the occasion. Host on the night will be the one and onlu Notorious K.I.D. Amazing performers include up-and-coming Limerick band Cosmic Humans, also UL’s own UL Drama Society and Dance UL will perform on the night, of course the Circus Society providing all the circus authenticity. Tickets are €10 and sold on the door. Don’t miss the Cirque du Queerbash extravaganza!

Check out the Out in UL site here