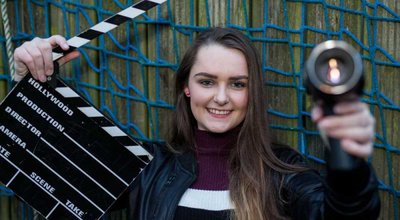 18-year-old Rachel McGill from Limerick was director of the short film Hygge that premiered in RTE2 in January.

Aspiring filmmaker Rachel McGill had a successful start to 2019 after the debut of her latest film ‘Hygge’ on RTE Two this past January.

Hygge tells the story of a blossoming friendship between an Irish boy and a Syrian girl whose families tensely live beside each other. The short film was part of the Fresh Film Festival Hothouse Project and Rachel began working on it when she was beginning university two years ago.

Featured in the film are Rio Ayoub who plays Aamira, Daniel Patterson as Paddy, Christine Lally and Lulius Hedges as the Syrian parents and Wayne Byrne and Sandra Dowd Callaghan as the Irish parents.

After the film’s debut on RTE, Rachel said, “It felt brilliant knowing a film I made was aired on RTÉ, especially one I made at such a young age! It was a huge step for me as a filmmaker and has opened lots of doors. I made Hygge in the first year of college, so my style and skill level has changed dramatically since then, but it is still something to be proud of.”

Rebekah Bustos, art director, and Rachel McGill, film student and director, have worked together for three years on various projects.

Rachel received praise from people all across the country right after the film was shown on television, “The response was amazing, I had some people message me on social media after it aired telling me things they liked about it or wishing me luck for the future. It was great!”

The subject matter of Hygge tackles the controversial subject matter of Ireland taking in refugees during the Syrian crisis in 2008. For Rachel, she said it was, “something I felt passionate about. At the time it was something that was hugely current and I am normally drawn to writing scripts on relevant social issues like this one. It’s a way for me to get out how I feel about certain things.”

Despite her young age, Rachel is no stranger to the film circuit as she was included in a 30-strong Creative Minds line-up at the 2018 Cannes International Film Festival last summer.

The up-and-coming young film director from Limerick first captured the attention of the public in 2016 when she became the first female winner of Young Irish Filmmaker of the Year award at the Fresh Film Festival with her movie ‘Poppies’. Since then, the 20-year-old has been working on various projects throughout the past year.

Set in the 1940s and inspired by Sylvia Plath’s poem, ‘Poppies in July’, Rachel’s movie ‘Poppies’ was chosen over 400 other entries in the finals submitted by young filmmakers from all over Ireland to become the 2016’s winner of the Young Irish Filmmaker of the Year Award.

Rachel is now a third-year Film and Television Production student at the Dun Laoghaire Institute of Art, Design, and Technology. Her plans for the future are to finish college and continue doing what she loves, “Right now, I am just trying to get through college, I’m coming up to the end of the third year and will hopefully major in directing next year.  I’m hoping to get some industry work during the summer months too, so fingers crossed!”

Now in its 22nd year, Fresh Film Festival encourages young people from Ireland and overseas, aged 7 to 18 years, to create, exhibit and share films. The Fresh Film festival encourages and supports young people from Ireland and international, aged 7 to 18 years old to get involved in filmmaking. The festival is open to individual filmmakers, schools, youth and community groups and provides an opportunity for these young filmmakers to see their work on the big screen, from comedy to animation. This year’s Fresh Film Festival will take place from March 25 to March 30 and Ireland’s Young Filmmaker of the Year Awards 2019 will be presented on the March 27 for the Junior category and March 28 for the Senior category during the Festival.

For more information on the Fresh Film Festival, click here