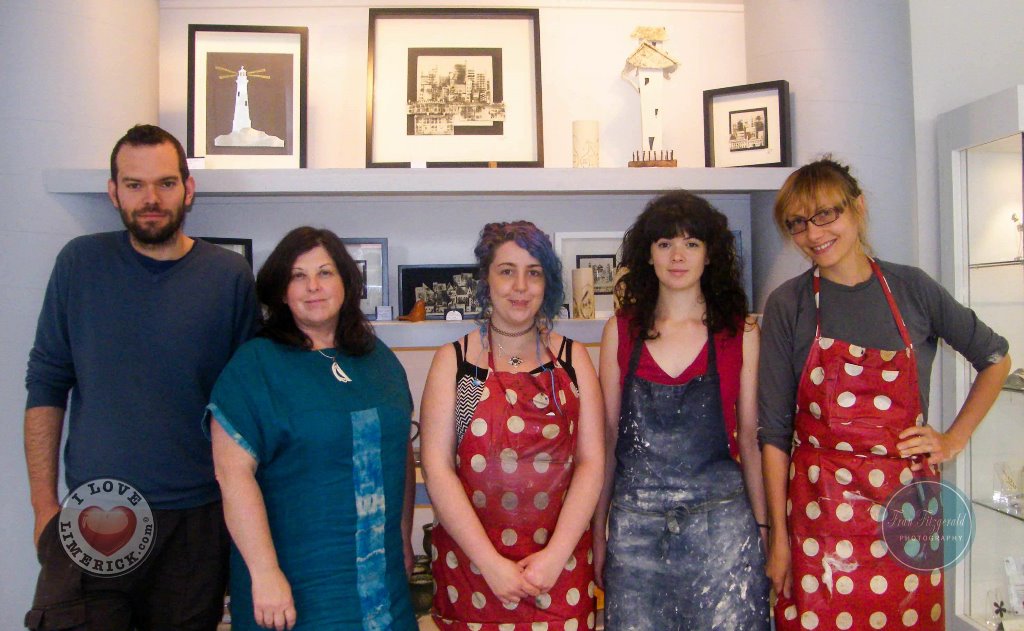 REVIEW Limerick Craft Hub in a City of Culture

The Hub creates a focal identity and destination for craft and design, Handmade in Limerick, through retail, gallery, education and open studios.

Speaking to Manager Clare Jordan at the Hub she explains: “The Craft Hub was set up by The Limerick Craft Collective in conjunction with Limerick City of Culture in 2014 and it was an opportunity for a community group of voluntary crafts people to form an organisation not-for-profit to support and promote craft made in Limerick. We were originally organising craft fairs and taking part in various community events we were trying to promote Limerick craft to create a forum that the craftspeople themselves could be involved in and so when we saw the opportunity to apply for the City of Culture grant to create the physical venue that the hub now is, we went for it.”

Clare explains how the craft hub has gone from strength to strength as it approaches its one year anniversary: “The products literally are changing every week, we have new deliveries coming in from our fifty makers, there are products being sold and new products being made so an artist might have had a particular couple of items in a range or a style of work and because they are now making something different our site has to be updated constantly. One of the nice features about what people comment to us about the hub is that every time they come in there is something different and it is improving all of the time. We had our official launch here on August 23, 2014 and the place was so packed you couldn’t swing a cat. We are very pleased that the footfall has been increasing month on month; we had 881 people through the door in June of this year. It has been growing and growing and the other great thing about it is the tourist level is increasing over the months now because we have been actively been promoting and marketing in the tourist area.”

The hub has a huge range of products to offer, some of which are made to order: “We also work in the corporate gift and awards area too, they can come and get bespoke pieces that are made-to-order or they can buy things off the shop floor for instance we do conference goodie bag fillers with the likes of chocolate made by Moonriver or something in the line of skincare items, there are a range of items that we do. We have also been delighted to have been chosen as a source of gifts and awards for people in both corporate and civic such as President Higgins and his wife Mrs. Higgins have both been presented with crafts made here at the Limerick Craft Hub as part of their visit to Limerick last September. Work made by our blacksmith has been presented to the Pope in Rome and we have had a number of corporate awards presented to people by the Chamber of Commerce, by LIT and by Limerick Council. The Mayor is buying the Limerick Treaty Stone as a gift to take to dignitaries when he travels. We are delighted that we are growing little by little, nonetheless it is a great achievement just coming up to our one year anniversary now on August 8.”

Due to the huge growth in interest for craft in Limerick, the Limerick Craft Hub are looking to expand: “We knew that within two weeks of being in these premises that it was too small for us, we opened the door with 30 artists work stocked and five business’s based in the three studios but we had such demand we now have about 50 stockists in the shop with new people coming in every week asking can their work be sold here and we have more demand for studios but again it is a question of the space. We are very limited in what is our social engagement area and ultimately this building is too small for us, and we are currently looking to find a suitable, affordable venue in the next 6-12 months. We are actively looking for a space and if somebody has a building that is effectively reasonably priced or available free for a not-for-profit good of the community and social enterprise we would be very welcome to have those discussions. Ideally part of our remit for City of Culture with the grant is that we have to be in the city centre and we have to provide retail, education, studios and also a gallery.”

“We have had three very successful gallery exhibitions with the Limerick Ceramics society and the graduates from Limerick College of Further Education, and an internal exhibition we ran for National Design week last November and we are open to welcoming exhibitions if people chose the gallery we have here.”

Clare explained how one of the social groups that formed from within Limerick City of Culture project has grown and continues today: “The Community Craft Corner that came about as a result of a comment from one of the ladies in the group that was in here for over two weeks knitting Royal De Luxe Granny’s Scarf as part of City of Culture 2014. It was a great success last September, the group had such a great time coming in on a daily basis and they made new friends or met old friends and they were enjoying the social aspect of their creativity. So Granny is now gone off to France with her scarf from Limerick still around her neck, they said they would miss not coming to the hub on a regular basis so it was suggested that they remain coming here every Monday and Friday from 11am-1pm and using donated wool they knit a whole host of items for charitable needs both in Limerick and around the country, even as far as Africa. We recently got a thank you to the ladies in the Community Craft Corner for the work they have done for babies in Africa and particularly the mothers in Kenya love the jumpers that were knitted here in Limerick and sent out as part of a charity campaign request. The campaign is on-going with the Daughters of Charity working in Africa.”

Clare continued: “When it came to knitting the scarf for Granny and The Royal Deluxe Team, they were blown away by the concept that the people of limerick participated in creating this gift for Granny and so much so there was a great effort made to pass by the Hub and have the scarf presented to Granny as she travelled through the city. That was presented on Saturday and she wore it for the rest of the weekend and many people asked where is the scarf now but it was a gift and the French took it back to France with them because it meant so much to them and it is now part of Granny’s story and Granny will take it around the world with her.”

The Community Craft Corner is now involved with a number of charities: “We are working with Enable Ireland, the ladies are knitting the Freddy Teddy who is the Enable Ireland mascot using donated wool so long as the jumper s yellow and orange and made to the specific sizes that have been set out Enable Ireland are then selling them as a fundraiser. We ask the public to donate wool so they can just drop it in anytime from 10am-5pm Monday-Saturday. We have had jumpers knitted for chickens for the Ex Battery Hens call out that was done last November, we have had blankets knitted for a range of the nursing homes in Limerick and they have also been knit for the Redemptoris Poor Campaign so there are some beautiful works being made and there are also works in progress being done but we are always looking for more wool donations.”

We are putting Limerick on the map as a craft destination in Ireland, not just in Limerick but as a nation as they have recently been included as one of the locations on the Design Ireland app produced by Irish Design 2015 in collaboration with IBM.”here

The design app is targeted at tourists and people in Ireland with an interest in design. All of the places and businesses listed on the app have been nominated by the Irish Design panel.

The Hub is delighted to see significant increase in the number of tourists visiting the Hub adding to the cultural and economic diversity of our city. Situated right at the heart of the city on Lower Cecil Street, it is a must see for anyone visiting Limerick. It is impossible to fault their beautiful premises, friendly staff, open craft studios, Irish craft and dedication to representing Limerick in craft and design in Ireland. REVIEW Limerick Craft Hub