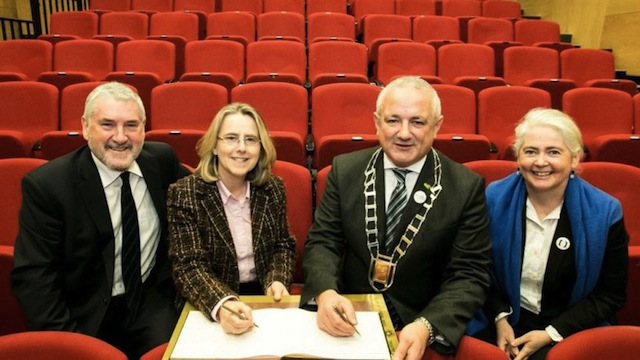 Revival of the BellTable Arts Centre 2016

Revival of the BellTable Arts Centre 2016 has commenced this year after years of closure. The BellTable Arts Centre in O’Connell Street Limerick was first established in 1981, it was the first of its kind being the first regional arts centre. The Arts Centre is multidisciplinary with a programme of theatre, dance, visual arts, music, film and comedy. The Bell Table is used for many different arts and cultural events in Limerick City. The BellTable can be distinguished for its 17th century design, the limestone ashlar ground floor elevation and Red brick façade exterior puts in on the map in Limerick city.

In 2013, the BellTable went into liquidation due to a large sum of debt owed to creditors following renovations in 2010 and 2011. Finally, after two years of research and development, the long-term future of the BellTable has been secured and its name will return to use. The iconic Limerick venue has been granted a 5 year lease under the full time management of Limerick city and County Council and Lime Tree Theatre.

Louise Donlon who is in charge of the Lime Tree Theatre regarded the reopening of the BellTable as “crucial to the whole health and development of a fully professional arts sector in the city.” Sheila Deegan, arts officer, said the “exciting revival of this significant venue means that it will once again be at the centre of arts development and practice in the city.”

With the revival of the Bell Table, they have begun looking for “dynamic, experienced and highly motivated individual” is being sought to programme, manage and direct the work at the Bell Table.

Louise Donlon referred to the job of programme director “a great opportunity for somebody to join the Lime Tree Theatre team at a very exciting time and it will bring a new dynamic energy to the building.” The re-establishment Bell Table is expected to “harness the creativity of the next generation of artists while also re-engaging with the local community.”

The search for a programme director of the BellTable has already begun as the deadline for cirriculam vitaes to be submitted is February 11 2016. They are looking for a candidate with a minimum of 3 years experience in a similar role.

Louise Donlon finally added that “It is a long term project, but I have no doubt in five, six, seven years’ time, the whole ecology of arts work in Limerick will have fundamentally changed, by far for the better, because of the presence of a space where people can feel that they can create work or to actually present it to an audience.”