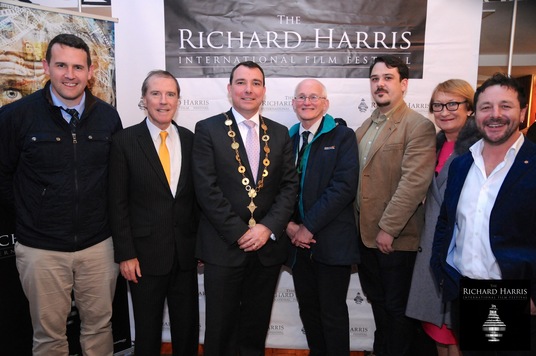 The programme for RHIFF 2018 was launched at the George Boutique Hotel by Zeb Moore, Festival Director at RHIFF and Cllr James Collins, Honourable Mayor of Limerick City and County.

Addressing the guests at the Launch event Mr. Moore spoke about the small idea that eventually grew phenomenally, making it a global festival.

“I look around here at the talent in this room and it is absolutely phenomenal and immense and has to be recognized on a global scale by not just Limerick. We are the Global Irish Film Festival series,” Mr. Moore added.

Affiliated to I.F.T.A. (Irish Film and Television Awards) and collaborating with Newport Beach Film Festival, one of the core objectives of RHIFF 2018 is to offer a platform where Irish and International film-makers from home and abroad can meet, collaborate and view each other’s work.

The Mayor opened the event and spoke about Limerick’s emerging importance as a destination for the film industry to an audience of local film-makers, artists, business people, representatives of the Council and cross-party Councillors.

“Couple of years ago we had a big idea and now we have a big movie studio. The challenge to the council now is ‘What’s our next big idea?’ We don’t want to stand back and pat ourselves on the back, we want to look and see what we are doing next,” Cllr James Collins pointed out.

The festival launch event featured the new logo, specially designed by digital artist Ken Coleman. The logo now features at Shannon Airport as well as the streets of New York.

The new logo features on the flyers for this year’s Film Festival. Picture: Paul Mullins.

On Saturday, October 28 Cass Warner – the granddaughter of Harry Warner and daughter of legendary director and producer Milton Sperling – will introduce her documentary The Brothers’ Warner about the founding of the Warner Brothers’ studio.

This Irish film festival will celebrate the life and works of Richard Harris and those who follow in his footsteps.

Producers’ panels, networking events, Acting workshops and VR/AR workshops will take place over the course of the festival at various locations in Limerick City.

Tickets go on sale from Monday, October 8 on the official website of the Richard Harris International Film Festival.