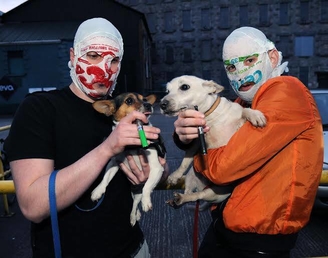 The Rubberbandits feature on Trainspotting, hitting Irish cinemas on January 27.

Limerick’s favourite duo The Rubberbandits feature on the soundtrack for T2: Trainspotting and have since received appraisal from Danny Boyle, the Oscar-winning director of Slumdog Millionaire. The soundtrack, which is due for release tomorrow, Jan 27, will feature the likes of Blondie, The Clash, Queen and more.

The Rubberbandits are a comedy hip-hop duo and artists from Limerick. They were formed by Blindboy Boatclub (Dave Chambers) and Mr Chrome (Bob McGlynn).  Recognised for their unique fashion sense the duo conceal their identities with masks made from plastic shopping bags. The unofficial third member of the group is Willie O’DJ (Paul Webb). The group sprung to international fame in 2010 when their music video “Horse Outside” went viral on Youtube. 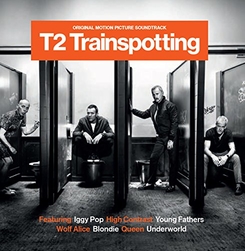 The Rubberbandits feature on Trainspotting, set to be a huge success. The film hits Irish cinemas on January 27.

The boys are clearly over the moon to feature on such a major soundtrack, taking to Twitter to say “Being on the same album as the prodigy is giving me a lump in my throat. Liam Howlett is the reason I do electronic tunes”

The duo have also received praise from Danny Boyle, the Oscar-winning director of Slumdog Millionaire

While at the film’s world premiere in Edinburgh Danny commented on the Rubberbandits while speaking with Spin 1038, the Dublin radio station. Danny stated “I was talking to John Hodge the screenwriter, and that is the kind of stuff he watches. When he is meant to be at home, re-writing, that is what he is actually doing – watching the Rubberbandits,”

With the new Trainspotting 2 film in mind, Danny Boyle added: “I started watching them and I loved them. They seem to be exactly – these characters, that is exactly the stuff they would watch. And they would really champion the Rubberbandits,”

Danny also spoke about The Rubberbandits feature on Trainspotting with their song, Dad’s Best Friend, and the music video which features in the film. Danny Boyle laughed about the video as he added “it is very appropriate to these characters as well, and the particular time of life they are at and it felt very appropriate to that. So it is in there as a good laugh – but it has a point as well.”

The original film, directed by Frankie Boyle, was released in 1996 and was met with widespread acclaim from critics. The film had an immediate impact on popular culture. In 1999, Trainspotting was ranked in the 10th spot by the British Film Institute (BFI) in its list of Top 100 British films of all time, while in 2004 the magazine Total Film named it the fourth greatest British film of all time.

It’s soundtrack is often said to be one of greatest in cinematic history, featuring artists such as Blur, New Order, Leftfield and most famously, Underworld and Iggy Pop.

Twenty years after the release of the original film, T2: Trainspotting is said to be one of the most anticipated films of the year. The film hits Irish cinemas on January 27.