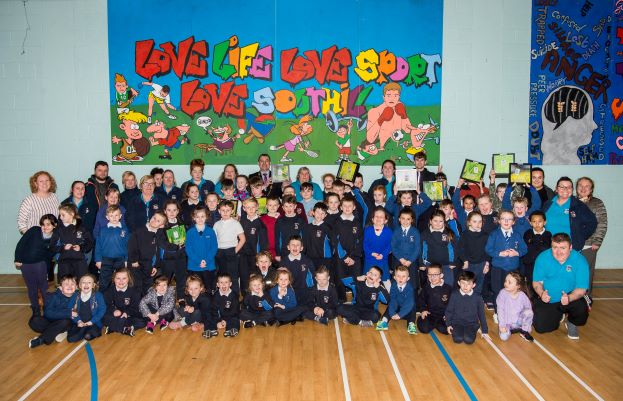 The Southill After School Club Keyring Project is made-up with children from Limerick, and they are getting in on the ‘green’ environment message with the launch of a set of seven keyrings on Monday, February 18. Their seven designs are based on five themes – Waste, Litter, Dog Fouling, Being Green and The Environment.

Schoolchildren, ranging in ages from eight to twelve, initially made posters on the themes of the environment and litter. They then worked with a graphic designer to develop their ideas into keyrings.

Sonya McMahon, Manager of Southill Afterschool Club said: “This project has been an exciting opportunity for the children to learn about their environment. It was amazing for the children to work with the graphic designer and create these amazing keyrings, which are on sale around the locality. It gives the children a chance to fundraise for their own activities and to promote their independence.”

The children discussed the issues most concerning them about the environment before they began creating their posters. One of the issues the children felt strongly about was their local environment and one particular message: “Clean up after your dog, we play here”.

From there, a graphic designer was brought in to work with the children who re-designed their posters for use as keyrings. The keyrings have been produced and are being sold around the locality with the proceeds going to fund activities at this year’s annual Easter Camp.

All the keyrings have Limerick City and County Council’s Customer Services number of 061 556000 to encourage residents to access services and report problems directly to the local authority.

The Regeneration Strategy Implementation Department of Limerick City and County Council saw potential in the poster campaign and contacted Southill Afterschool Club to see if the children’s creations could be used as part of a wider environmental campaign.

Sean McGlynn from the Regeneration Strategy Implementation said: “Regeneration is about balancing social, physical and economic development.  We are delighted to be sponsoring this wonderful project which gave children a chance to express themselves, talk about their area and gave them an opportunity to learn about and work with a graphic designer.”

“We also took the opportunity to push out details about the council’s Customer Services number. As the Regeneration programme becomes more embedded into the everyday services of the council, it is important that residents know who exactly to contact if they require assistance. Hence we have put the 061 556000 number on the keyrings.”

Mayor of the City and County of Limerick Cllr James Collins said: “It was interesting to see how the children linked local and global messages. The environment is one of the key issues of our time and it’s important that children are aware of this and the impact it can have in their own areas. Congratulations to all those involved.”

“I’m delighted they are going to be using their campaign in the wider community with the keyrings. Everyone needs to do their bit and contribute in the fight for a greener Limerick.”

For more information on the Southill Area Centre, go here.