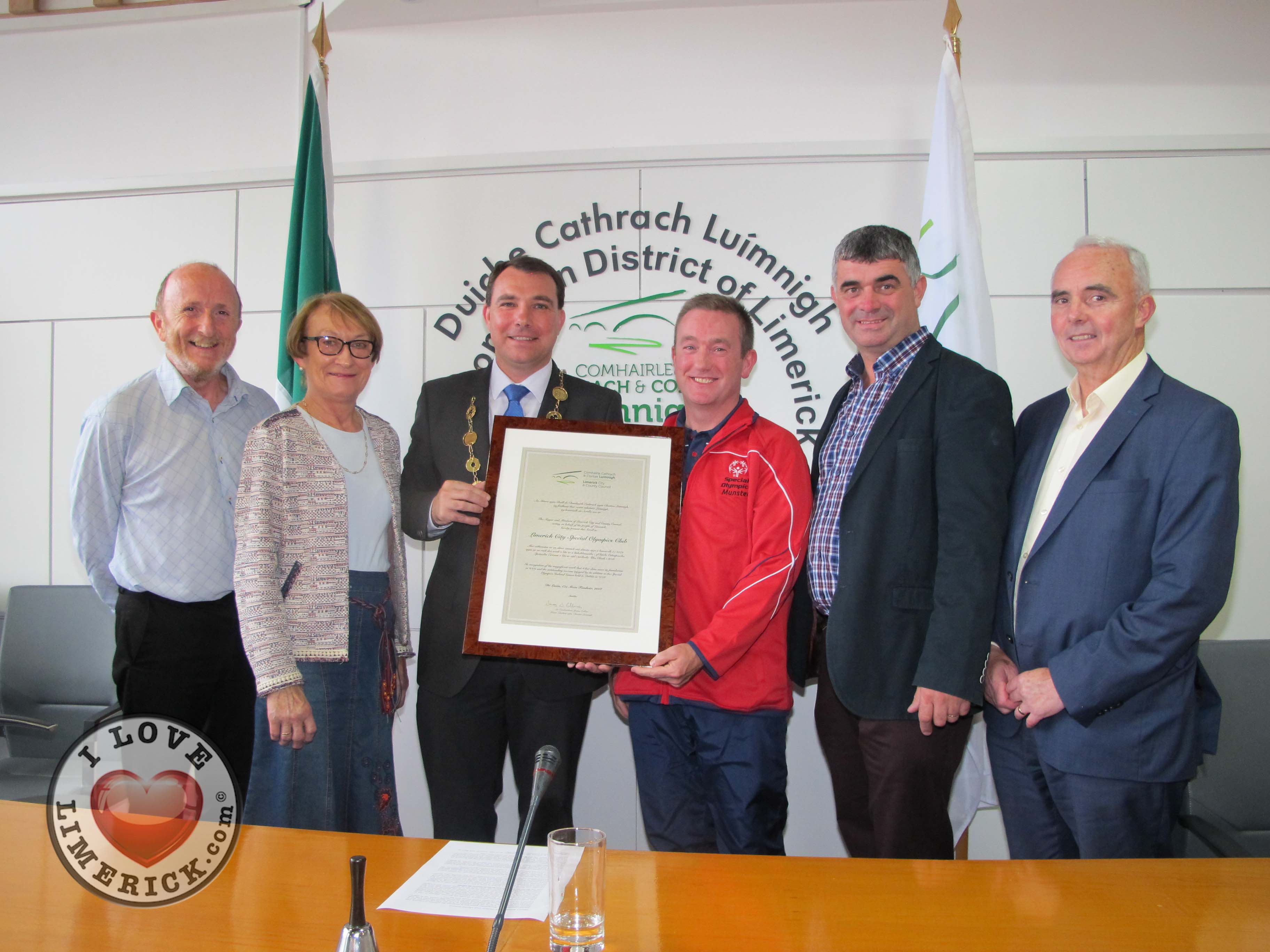 Mayoral Reception held on September 17th at the Council Chamber for Limerick City Special Olympics Club was in recognition of the magnificent work that it has done since its foundation in 2009 and the outstanding success enjoyed by its athletes in the Special Olympics Ireland Games held in Dublin in 2018. Pictured are Cllr John Loftus, Cllr Elenora Hogan, Cllr James Collins, Mayor of the City and County of Limerick, with James Keays, Chairman of Limerick City Special Olympics Club, Cllr Richard O’Donoghue and Cllr Malachy McCreesh.Picture: Baoyan Zhang/ilovelimerick

The reception was an emotional one as the Mayor and fellow councillors thanked the Special Olympians for the incredible amount of work and perseverance they put in to represent Limerick at games and to come home with such success.

“This worldwide Special Olympics movement is 50 years old this year. Founded in 1968 by Eunice Shriver a sister of John F. Kennedy. It is the world’s largest sports organisation for children and adults with intellectual disabilities and we are delighted that you represent us here in Limerick City,” Mayor James Collins said.

Mayoral Reception held on September 17th at the Council Chamber for Limerick City Special Olympics Club was in recognition of the magnificent work that it has done since its foundation in 2009 and the outstanding success enjoyed by its athletes in the Special Olympics Ireland Games held in Dublin in 2018. Picture: Baoyan Zhang/ilovelimerick

Limerick City Special Athletes won a total of 30 medals at the Special Olympic Summer Games back in June. 12 gold, 16 silver and two bronze and the athletes proudly displayed their medals around their necks as the mayor congratulated and thanked them all.

Limerick City Special Olympics club has a special bond with the county and the Ireland Summer Games were held in Limerick in 2010 and 2014, with the opening ceremony taking place in Thomond Park in 2010 where the late Dolores O’Riordan performed along with her fellow members of the Cranberries for the incredible occasion.

“Everyone is so proud of you all the coaches, the families and the supporters. Special Olympics is about transforming lives, it’s about the spirit of giving and teamwork, it’s about making your community and neighbourhood a more welcoming and accepting place for all communities,” Mayor Collins concluded.

Related Topics:special olympics
Up Next