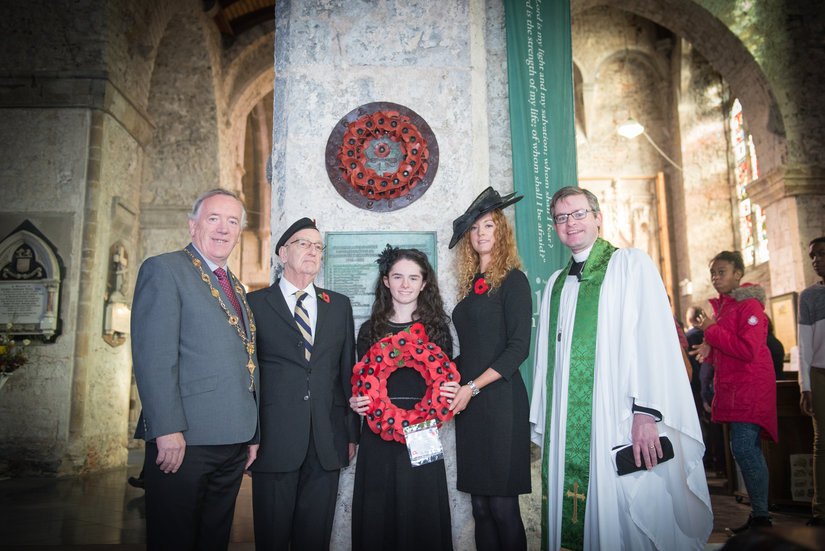 A new sculpture to commemorate the 35,000 men of the fifteen Irish Regiments, who made the supreme sacrifice during World War 1, was unveiled at St Mary’s Cathedral, Limerick. The unveiling took place in conjunction with the annual service of remembrance.

The St Marys Cathedral Sculpture, created by Limerick-born artist John Toomey, consists of two parts. The upper shows a shamrock surrounded by a traditional poppy wreath. This section has an outer bezel with the regimental badges of the fifteen Irish Regiments from the Island of Ireland in order of strict seniority. The lower plaque is engraved both in Irish and English with the names of the various regiments.

A unique aspect of this sculpture is that it is totally patinated with a multitude of colours. The bottom plaque depicts the chaos of war and the artist has patinated the plaque to give the Irish perspective of ‘Through mud, through blood to Green Fields.

The dedication service was conducted by The Canon, the very Reverend Neill J. Sloane. In attendance were the mayors of Limerick and other numerous dignitaries representing both military and civil organisations

The dedication and oration of the sculpture was given by John Toomey. Colour squadrons of numerous organisations were also in attendance.

To find out more about the British Legion Ireland click here