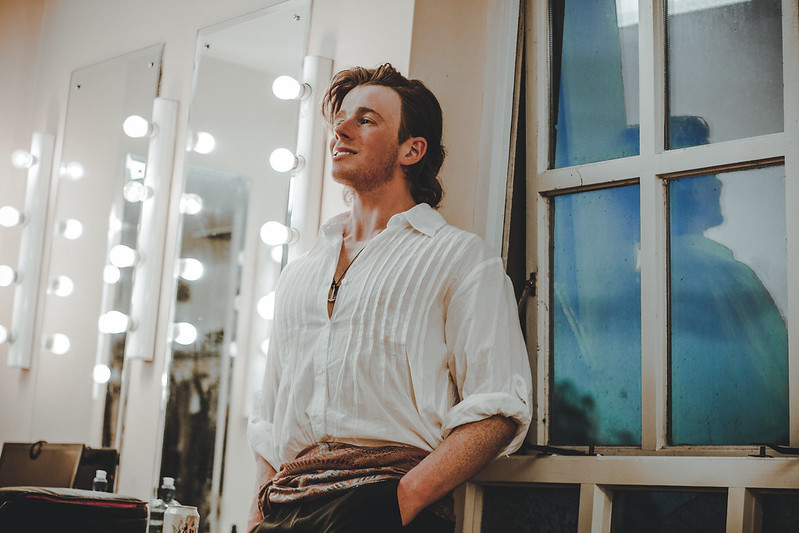 Stuart Mackey is a 28-year-old actor and multimedia designer.

Stuart has performed in Beauty and the Beast, Alice in Wonderland & Aladdin.

Stuart Mackey is a 28-year-old actor and multimedia designer. He has been in films such as ‘The Wandering,’ ‘When We Were Men’ and the short film ‘I Have Sex Daily.’ He is no stranger to theatre either, having performed in Beauty and the Beast, Alice in Wonderland, Aladdin, and many more panto performances.

He has theatrical training, a dancing background, and film experience, and he is currently located in Co. Clare. He currently has almost 700k followers on TikTok where he posts acting Point of View and ‘Welcome to Ireland’ videos and has over 63k followers on Instagram.

I was born in London but raised in Limerick. In one aspect I had a normal childhood, I thought I had was in normal childhood but looking back on it I was always a theatrical child. I would perform one-man shows for my family or jump over the garden wall to my neighbours to sing a song or two when they had guests. I was a very quiet child socially; very self-conscious; I lived in my imagination for large periods of my youth. I would perform before I even realised, I was performing; I would feel creative and confident (doing what I now know as “Acting” helped overcome my insecurities)

When did you start getting into acting?

Movies! Even as a kid I loved watching movies; Eddie Murphy, Tom Hanks, Richard Harris I loved watching their work, then Like most Irish children I joined Speech and Drama in primary school and attended the Féile for voice and poetry (That’s when I started understanding the performance Art) It wasn’t until I was 16 and was attending The Limerick Youth theatre: where I had amazing adjudicators like Angie Smalis, Anne Blake, Richard Lynch or Simon Thompson that I understood how much I wanted to be an Actor. (There was a passion and drive to learn and develop that I’d never felt before).

I can never answer this because that’s like asking how long is a piece of string. Acting and film specifically Richard Harris & Werner Herzog are great inspirations. In general, Alan Watts, Jodie Foster, Martin Scorsese, Ben Francis ( honestly this list could go on and on for a countless amount of pages so I’ll stop here)  – I’m inspired by people who have never let their limiting beliefs hinder them. ADD MY MOM TO THE LIST! She would kill me if I had to write a list of people who inspired me and she wasn’t on it. (Could you imagine I’d never be invited to dinner again)

What has been your favourite performance so far?

I was cast as Captain Yolland in Translation by Brian Friel performed by the College Players back in 2919. Long story short, I never got to perform (I was hired to work for the Apple TV show Foundation and had to fly to Iceland the week of the show) Even though I never opened the show I appreciate the creative license Margaret Hough & Rebecca Barry gave me in interpreting George. I hope to have the opportunity to play him again (to an audience this time)

I played Leonardo in Blood Wedding by Federico Lorca. It was an overall magical experience, and the director Sarah O’Toole of Anam Theatre was a pleasure to perform for/to (She taught me a lot) A highlight in my career.

What have been some struggles you’ve faced getting to where you are now?

Stuart’s mantra is, “Do what’s best for you – Do what makes your heart sing”.

Of course, lol but the hardest sometimes is Waking up and questioning yourself with “Am I doing the safest thing for my future”…. But…. I’m realising that the “safest” option isn’t always the best. It might not give you the most joy and sense of fulfilment or purpose. I have a mantra “Do what’s best for you – Do what makes your heart sing”.

Developing a strong sense of self-worth, being open with myself “Living my truth”.

Like I said I was a very insecure person, always worried about what other people’s perception was of me.

During the pandemic, I did a lot of reading and soul searching. I took my background in Multimedia and Film to social media used it as a log/created some engaging content to express my anxieties and struggles + how I was working through them.

I was blown away by a whole the support and people who resonated with what I was saying.

Happy!!! I’m very driven and dedicated in my career/work-life but there is a lot of fulfilment in the journey (constantly learning and growing). A bafta would be nice too though.

What advice do you have for any aspiring actors?

You have one life don’t spend it being safe. No one controls your destiny but you. Push past your limits and keep going.

Do you have any upcoming projects in the works?

None I can speak of right now.

The people: A town is made of bricks and mortar; it is the inhabitants that breathes light and life into it. I love Limerick and the people here.

Related Topics:Stuart Mackey
Up Next