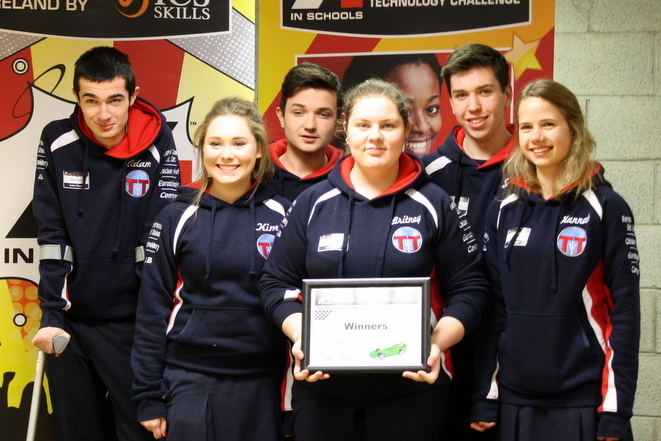 Team Turbo Titans from St. Nessan’s Community College, is revving up this week for the National Finals of the F1™ in Schools Technology Challenge, powered in Ireland by Irish Computer Society.

After a successful day at the Regional Finals, which were held in U.L. on March 3rd, the Limerick team ‘Turbo Titans’ came away victorious with two awards, ‘Best Verbal Presentation’ and ‘Best Pit Display & Portfolio’, qualifying them for the Irish National Finals, which will take place on April 29th in Dublin Castle.

The Turbo Titans members, Jake Sheehan, Britney Ryan, John O’ Mahony, Hannah Müller, Kim Kiely and Adam Slater Buckley, will go head-to-head with teams from throughout the country, testing the speed and engineering quality of the F1™ model car on which they have been working since September. The car, measuring 25cm long and made of balsa wood, could potentially reach scale speeds of up to 350km/hr.

Using Computer-Aided Design software to model the car’s design specification, the team then collaborated with the University of Limerick F1™ in Schools Make Centre on its construction. The Turbo Titans worked in conjunction with University of Limerick using its specialised manufacturing equipment to convert the team’s 3D designs into a real model car.

In addition to racing head-to-head, the competing teams will be judged on the quality of their engineering, marketing, graphic design and resource management portfolios and on a verbal presentation of their work.

Turbo Titan’s Team Co-Ordinator, Jake Sheehan, spoke to us about how the team has thoroughly enjoyed taking part in the F1™ in Schools Technology Challenge so far and is hopeful of a strong performance in the National Finals: “Our team’s progress has been amazing and we’ve been working non-stop to become the best that we know we can be. Each person on the team has gotten a lot out of the ‘F1 in Schools’ project and our team is determined to win.”

If successful at the National Finals, the Turbo Titans will then progress to Singapore, where the International Finals are being held this year. The team would like to say a huge thank you to our sponsors and supporters.