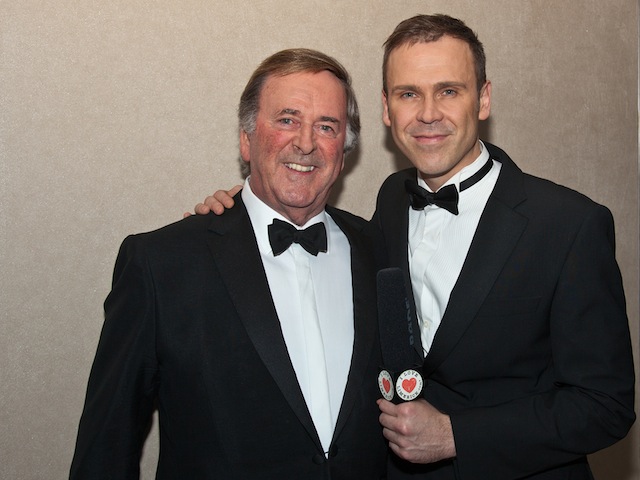 Terry Wogan was my idol. Tributes have been paid to veteran broadcaster who has died aged 77 after a battle with cancer.

The son of a grocery shop man from Limerick became a legendary broadcaster and he was a huge inspiration to me as if Terry could do it someone else from Limerick could do it. He inspired people from Limerick. He left Limerick when he was 15 yet he kept coming back and there must have been a reason for that. He loved Limerick and he was so proud of it. His wonderful personality and charm will never be forgotten. He is forever in out hearts in Limerick. We love you Terry! You did us proud!

Terry Wogan was a beloved figure both in Ireland and England as his fans idolised him. He is a remarkable figure and we are so proud to be able to call him our own. British Prime Minister, David Cameron remarked the death of the legend as “Britain has lost a huge talent.” Irish President, Michael D.Higgins also paid his respects to the “true national treasure” as he praised his work and frequent referral to his homeland that is Ireland.

Born in Limerick in 1938, Terry began his career at RTÉ, first in radio and later as presenter of shows such as Jackpot, a light entertainment quiz show.

Terry attended Crescent College and underwent a largely religious upbringing as a Catholic. His father was promoted to general manager of the grocery store he worked for, Leverett and Fyre. It was this promotion that put Terry on an unexpected career path as his family and himself moved to Dublin when he was just 15. However he never forgets his beloved hometown of Limerick, he often referred to it, as “Limerick never left me, whatever it is, my identity is Limerick.”

Terry found a love and passion for rock and roll as well as participating in theatre as an amateur dramatics. It wasn’t until his twenties that Terry saw a very inviting advert in the paper for a position as a newsreader and announcer with RTÉ.

He moved from news reading and announcing to more comical TV roles and TV presenting, this is where Terry found his real love and passion in life.

Following great success in his career in the sixties with RTÉ, Terry decided to look for extra work with the BBC in Great Britain. In April 1972, he took over the breakfast show on BBC Radio 2, swapping places with John Dunn, who briefly hosted the afternoon show. By taking over the Breakfast show he received astounding popularity with the general public and fellow comedians and presenters.

Terry also tackled the broadcasting waves of BBC, in 1974; Terry had his own chat show ‘Wogan’s World’ which broadcasted on BBC Radio 4 until 1975. In 1993 Terry returned to BBC Radio 2 with his chat up ‘Wake up with Wogan’, he interviewed many different celebrities and singers. His career really rocketed during the nineties and naughty’s as he was the highest paid chat show presenter of his time.

Terry Wogan in 2012 during a visit to Limerick. Picture: Dolf Patijn/ilovelimerick

He commentated on the Eurovision for more than 30 years and was also known for his chat show ‘Wogan’ and for his role presenting the ‘Children in Need’ telethon.

Following his retirement from full-time broadcasting in 2009, Terry continued to present a two-hour Sunday morning show, on BBC Radio 2.

Terry, who was granted an honorary knighthood by Queen Elizabeth in 2005, received the freedom of Limerick in 2007.

In the same year, he was presented with a Special Lifetime Achievement Award at the Limerick Person of the Year awards.

One of his last public appearances in Limerick was in May 2012, which he attended the Mayor’s Ball at the Strand Hotel.

During Terry’s interview with Richard Lynch at the Mayor’s Ball in May 2012 he talked about his love of Limerick city saying, “I am Limerick’s, nothing will ever change me now. All my formative years were spent here, cycling back and forth across Sarsfields bridge, playing rugby in Thomond park, my heart is in Limerick.”

Terry also commended the great Paul O’Connell who received the key of Limerick in 2007, “Paul O’Connell is the man, he is a tremendous hero of mine.” He added, ” I am honoured to be a freeman of this city, I’m very proud that I was born here and I will never forget the fact that Limerick is my home, there must be a reason I always come back.”

Despite his fame and the fact that he was based in the UK throughout much of his career, Sir Terry often returned home to Limerick and never missed an opportunity on radio or TV to speak about his Limerick roots. The Council honoured him with the title of Freeman of Limerick in 2007, which I know was a title that meant very much to him and his family.

On behalf of I Love Limerick and the people of Limerick, I wish to extend my deepest sympathies and condolences to Sir Terry’s family. Terry we love you and you will never be forgotten!

Limerick City and County Council has confirmed that members of the public will be able to express their condolences from Monday February 1 by signing a Book of Condolences, with separate books being opened at the Council buildings in Dooradoyle and in Merchants Quay. These Books of Condolences afford Limerick people at home and abroad the opportunity to convey their sympathies to the family of the late Terry Wogan, a true son of Limerick and a broadcasting institution whose passing will be mourned by millions.