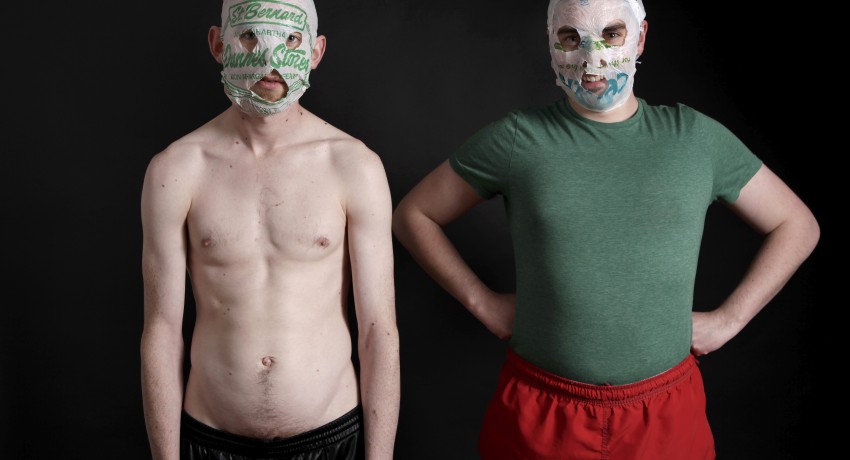 The Rubberbandits – Limericks most loved

The Rubberbandits are a comedy hip-hop duo and artists from Limerick. They were formed by Blindboy Boatclub (Dave Chambers) and Mr Chrome (Bob McGlynn).  Recognised for their unique fashion sense the duo conceal their identities with masks made from plastic shopping bags. The unofficial third member of the group is Willie O’DJ (Paul Webb). The group sprung to international fame in 2010 when their music video “Horse Outside” went viral on Youtube.

Blind Boy Boat Club (Chambers) and Mr Chrome (Bob McGlynn) have been friends since their secondary school days at Ard Scoil Ris. While still at school the pair began recording prank phone calls and recording them onto cassettes and CDs. They soon gained notoriety around Limerick.

After school Blind boy attended Limerick School of Art and Design where he studied graphics. He then went on to do further study in LIT where he graduated with an MA in Social Practice and the Creative Environment.

Mr Chrome from the Caherdavin area, went on and studied model-making in Dun Laoghaire and worked on “The Tudors” in Ardmore Studios, Wicklow.

The Rubberbandits were formed in the early 2000s, initially their exposure came from their recorded prank phonecalls. These prank calls featured on a number of Irish and international radio stations. It was not until 2007 that they became a musical stage act.

The Rubberbandits developed a comedic style that is satirical, surrealist and crude. Their work explores a number of themes that are of significance to Irish urban youth, including drug abuse and violence.

2010 was a huge year for Blindboy and Mr Chrome. Having been listed as number two on state magazines “international act to watch for 2009”. The Rubberbandits played at Electric Picnic 2010. This show followed their Friday night headline slot at the Little Big Arena.

In October 2010, they began a weekly slot on the RTÉ Two television comedy show Republic of Telly where their first clip “The Rubberbandits’ Guide to Limerick” received over 100,000 YouTube views in the 7 days after broadcast.

Their music video “Horse Outside” was released on 8 December 2010 via iTunes. The video premiere was on Republic of Telly that night, and within 72 hours, it had reached 530,000 views on YouTube.

The Rubberbandits received an IFTA in 2011 for “Television Moment of the Year”.

In February 2011 they released the single, “I Wanna Fight Your Father”. The video was posted on the Rubberbandits YouTube channel and went on sale in February 2011. Within 24 hours the video had received 170,080 YouTube views. The music video for an alternative version of the song “Ba Mhaith Liom Bruíon le d’Athair” was released on YouTube on 3 March to promote Seachtain na Gaeilge.

Since 2014, the Rubberbandits have described themselves as artists rather than comedians. Blindboy stated that their “movement is now funded by the Arts Council of Ireland”.

Having come a long way from two school boys making prank calls in school, the duo continue to be a roaring success. Their most recent work was a one-off documentary, The Rubberbandits Guide to 1916. The documentary aired on RTÉ2 on December 30, 2015.