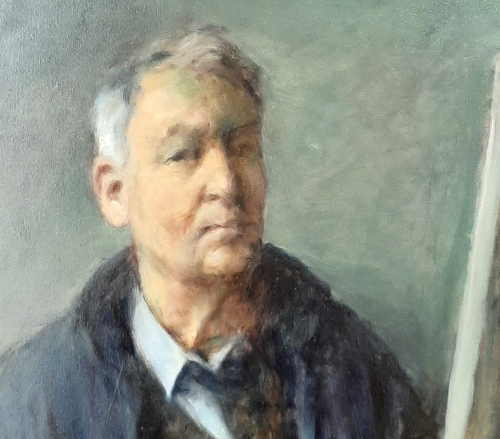 UPDATE: Limerick Artist Thomas Ryan to give a once in a lifetime talk at People’s Museum

The talk will be open to the public free of charge and kicks off at 7 pm, there is no booking in advance required. The People’s Museum has been showcasing the work of Thomas Ryan since early November.

Museum manager Dr. Rose Anne White commented “Thomas Ryan is one of Ireland’s most significant artists. We are incredibly grateful to be able to show a selection of his works in our museum on Pery Square, showing his versatility across portraits, still life, and historical scenes.”

On show is a selection of Thomas Ryan’s works, including one of his most famous works “The G.P.O. 1916” which hung for over 20 years in Leinster House.

Thomas Ryan PRHA was born in Davis Street in Limerick and trained at Limerick School of Art and at the National College of Art. He served as President of the Royal Hibernian Academy for ten years and is an honorary member of the Royal Academy and the Royal Scottish Academy. He was made a freeman of Limerick in 2007 and holds an honorary doctorate from the University of Limerick.

He continued to return to Limerick for his inspiration and work, despite gaining experience and an excellent reputation in both the national and international arenas.

Speaking on the decision to entitle the museum ‘The People’s Museum of Limerick’, manager and curator of the museum, Dr. Rose Anne White said, “It showcases items that have been donated by the people of Limerick that are about the history of Limerick. The tour guides, carpenters, curators are all from Limerick themselves so you will be shown around by someone who lives right across the road in most cases”.

For more information 0n the Thomas Ryan exhibition at the  People’s Museum of Limerick click here.

Hughie O Donoghue exhibits Time, Tide and the Memory of the House