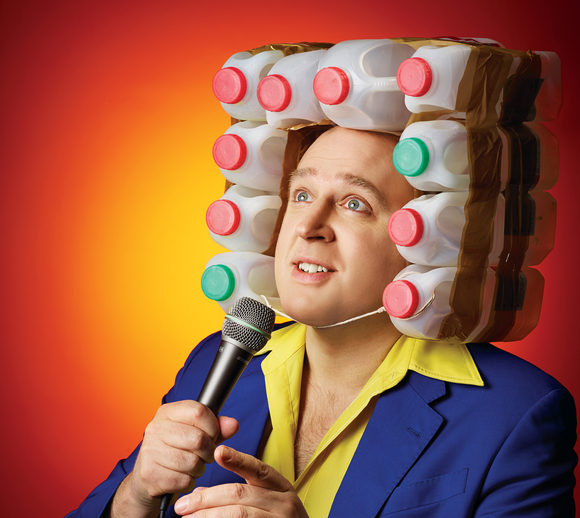 For the first time ever, the master of the one-liner himself, Tim Vine, bringing his stand-up tour to eight venues in Ireland!

He’ll be telling lots of silly new jokes, showing off new homemade props, singing some new daft ditties, and all with the appearance of confidence.  The following subjects will be touched upon briefly: pixie football, ice cream, and nibble feeders. Come along, sit down, and laugh. The quantity won’t let up. This is comedy without a message. What an odd person. What a lot of nonsense. What else is he going to do?  “Sunsets are in the sky, milk’s nice, and I’m an idiot.”

Tim Vine, the king of the stupid one-liners, sold out the entire run of Sunset Milk Idiot at the Edinburgh Festival in 2017, where he had previously won the award for Dave’s Funniest Joke of The Fringe in 2010 and 2014, as well as runner-up spots in 2011, 2012 and 2013. Fresh from his success on BBC Radio 4 with The Tim Vine Chat Show, which has just finished its second series, and on BBC One with the very silly Tim Vine Travels Through Time, Tim is arriving in a town near you – with a new barrage of daft jokes and songs.

Since winning the Perrier Newcomer award at the Fringe back in 1995, the former world record holder for most jokes told in an hour has gone on to perform numerous sell-out tours and festivals in the UK and beyond. On the back of these shows he has released five stand-up DVDs including Punslinger, Jokeamotive and Tim Timinee Tim Timinee Tim Tim To You, and his vast wealth of material has been preserved in books such as The Biggest Ever Tim Vine Joke Book and The Tim Vine Bumper Book Of Silliness.

Besides stand-up, Vine has had acting success with Not Going Out, The Sketch Show and Blandings on television, and he wrote, directed and performed in the feature film Fearmoth – which premiered at the Brighton Film Festival in November 2017. He has also presented gameshows such as Whittle, Fluke and Don’t Blow The Inheritance, was a finalist in Let’s Dance For Comic Relief 2013 and won Sport Relief’s Let’s Play Darts.

Providing support is the legendary comedy magician John Archer. He amazed Penn and Teller, and he’ll amaze you too!

To read more stories about the Belltable click here