By Richard Lynch on February 17, 2016@richanthon 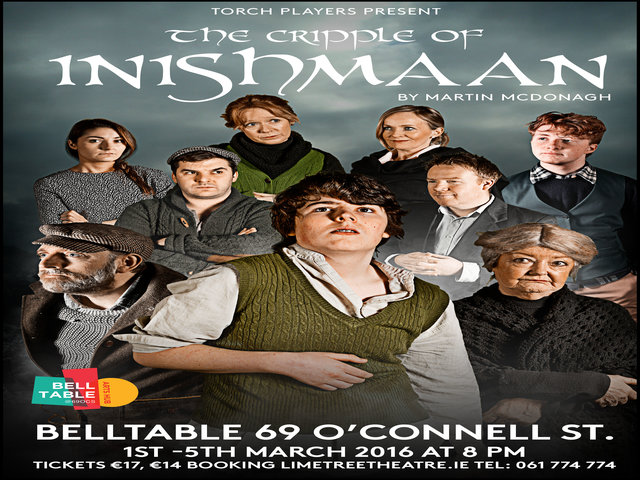 This year director, Maurice O’Sullivan, has assembled a cast of nine to take on Martin McDonagh’s dark comedy. The play is set on the rural island of Inishmaan in 1934. In a place where news is currency, the inhabitants, through village gossip Johnnypateen, learn of a Hollywood film crew’s arrival on the neighbouring island of Inishmore.

McDonagh is a playwright, screenwriter and film director, born and raised in London with both British and Irish citizenship. He has been described as one of the most important living Irish playwrights.

McDonagh’s comic masterpiece tells the story of the eccentric islanders but centres around “Cripple” Billy Claven, a young man trying to escape the boredom of the island and make sense of who he is.  This play will have audiences crying with laughter as well as empathising with those less fortunate characters.

Making their return to the stage for Torch Players this year are, Mary Harvey, Edel Heaney, Mícheal O’Dubhghaill, Peter Hayes, Joanne O’Brien, Dan Mooney and Antoinette Portley. Torch Players are also delighted to welcome Oisín Gogarty as well as James Corr who will be taking on the role of Billy Claven. Award winning team Tara Doolan and Pius McGrath will tie the entire production together with lighting and sound.  Torch Players Present The Cripple of Inishmaan

The show will run from the 1st to 5th of March at The Belltable, 69 O’Connell Street. Tickets are priced at €14/€17 and booking information can be found on www.limetreetheatre.ie or directly from the box office on 061 774774.