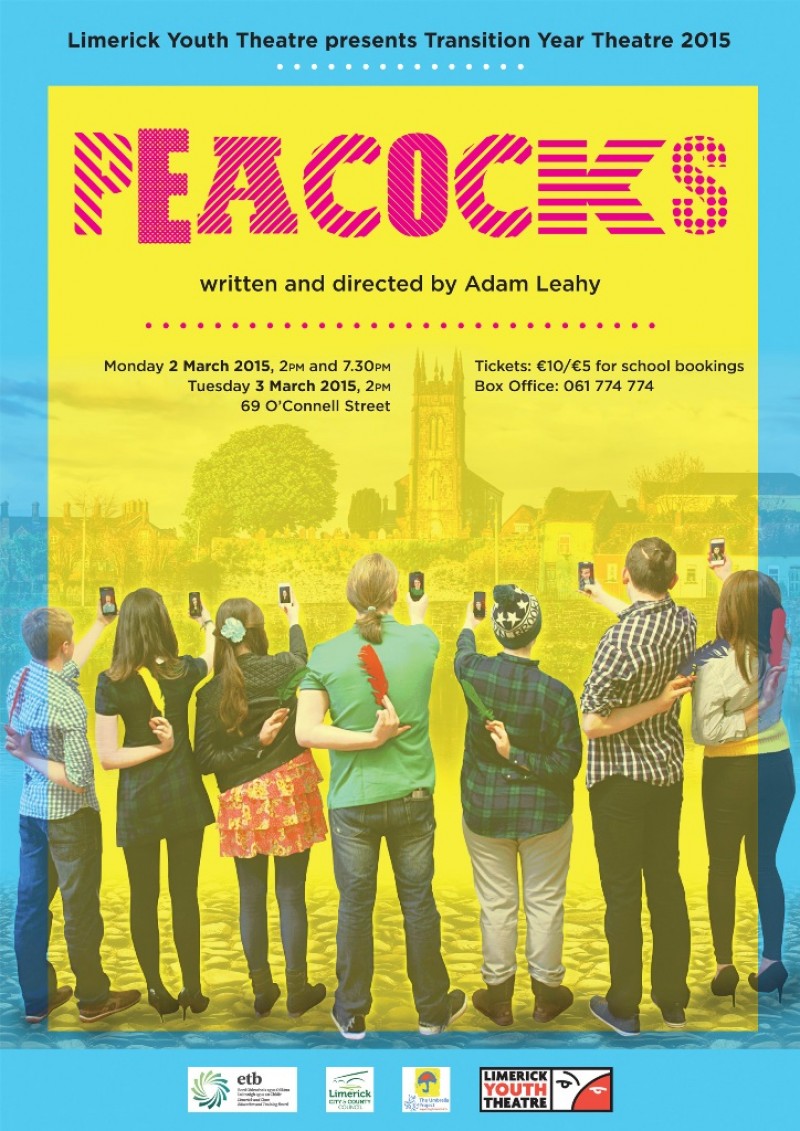 Peacocks is a play written and directed by an emerging young director, Adam Leahy. Peacocks is set on New Year’s Eve, 2015. Seven childhood friends gather in their hometown, Ballybeg, for a reunion – their first in two years. Taking place over one night, Peacocks follows seven people at very different but achingly similar places in their lives as they reacquaint, recall stories from their youth, and assure each other (as well as themselves) that success and happiness are just around the corner. A tragic comedy in vibrant colours, Peacocks takes a darkly humorous look at what it means to be coming-of-age in the 2010s. Staged here by Limerick Youth Theatre and starring members of Transition Youth Theatre.

Kilkenny-born writer/director Adam Leahy has only been working in theatre for a year. Since graduating from the University of Limerick in 2013, Adam has been working with Limerick arts group The Filibusters writing and producing comedic short films, performing standup comedy nationally, and producing theatre pieces, as well as collaborating with Spaced Contemporary Theatre on their debut show. His first show, The Wild Geese, saw two highly-acclaimed runs in 2014, including Kilkenny and a string of sold-out shows in Limerick. Peacocks is his third original play.

Adam Leahy said; ‘I’m hugely looking forward to bringing this show to life with a fresh group of people about to emerge in Limerick theatre. I grew up in a place [Kilkenny] where youth theatre was fairly prominent, seeing a lot of great productions and talent, but also the great things that came out of them due to the creativity this kind of theatre allows younger people. I never really got involved back then, so to be involved in this kind of project now, especially so early on in my whole theatre experience, is pretty humbling’.

Angie Smalis, Artistic Director of LYT commented; ‘This is the 5th year LYT has produced TYT, a project that is designed to provide a rich and challenging work experience for Transition Year (TY) students. A professional team including an emerging young director; a production manager, a costume/set designer and a lighting designer have teamed up to share their knowledge and experience with 18 TY students from 6 schools in Limerick. The cast and crew have just given up their midterm break so that they can work together on this new piece of theatre’.

Limerick Youth Theatre (LYT) is a company of young performers, dancers, writers, designers, directors, producers and film-makers, located in Limerick. LYT was set up in 1997 with a vision of providing a unique opportunity for young people from all backgrounds to cross social/cultural divides through youth drama experiences. It runs a two-year training course in theatre and performance arts.