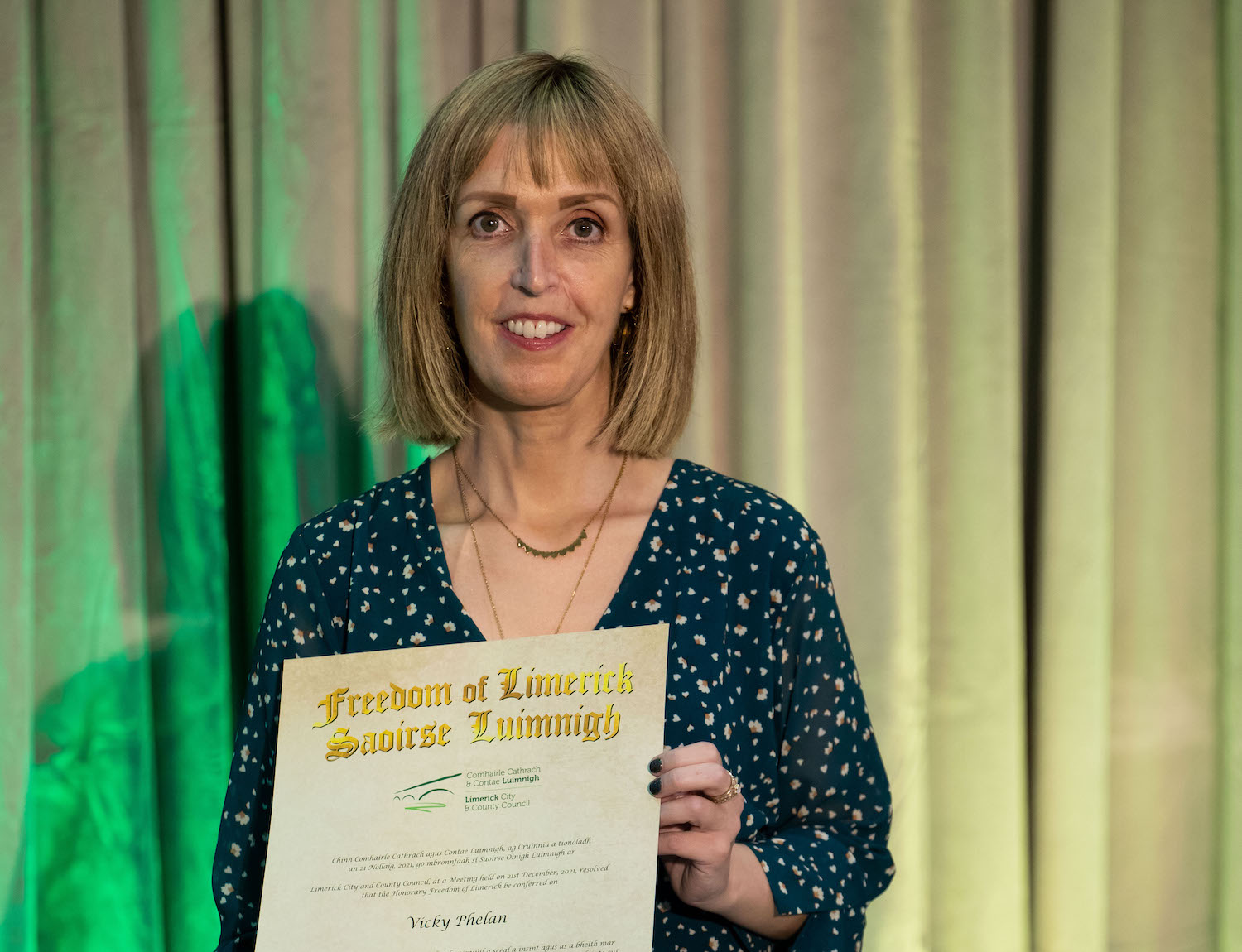 Vicky Phelan Freedom of Limerick – Vicky is being honoured for her work in uncovering the Cervical Check scandal and her tireless advocacy and support of other women who have been affected and are fighting for justice, as well as advocating for the rights of terminally ill people to end their suffering. Photo by Alan Place.

Limerick City and County Council has announced that there was a significant worldwide audience for the Freedom of Limerick ceremony for Vicky Phelan.

Figures received from the AV company involved in the live streaming from the Council Chamber in Dooradoyle on February 3 show that there were 4,900 plays during the ceremony.

The audience stretched from Ireland to Russia, the United States to Romania.

The ceremony was accessed via the Limerick.ie website, with the Council providing additional bandwidth on the website to ensure no interruptions in service.

The traditional format of the Freedom of Limerick ceremony was altered, due in part to Covid-19 regulations and also to take account of Vicky’s health.

The breakdown of the plays is as follows:

Commenting on the figures, Mayor of Limerick City and County, Daniel Butler said, “The number of people who tuned in from around Ireland and the world is a testament to Vicky Phelan, her story and how she is a voice for others. For many people, the story of Vicky is their story, and sadly their loved ones are no longer with us.”

“It was an honour and a privilege to meet with Vicky and her family at the ceremony. She is a truly remarkable woman who is fighting for us all. She thoroughly deserves the Freedom of Limerick.”

Vicky is pictured with her husband Jim Whelan and son Darragh, 11 after the ceremony. Picture: Alan Place.

Cervical check campaigner and Limerick hero Vicky Phelan was awarded the Freedom of Limerick in a special ceremony in Dooradoyle last night, Thursday, February 3. The accolade is the highest honour one can receive from Limerick City and County Council.

Vicky is being honored for her work in uncovering the Cervical Check scandal and her tireless advocacy and support of other women who have been affected and are fighting for justice, as well as advocating for the rights of terminally ill people to end their suffering and the health campaigner will become the fifth woman recipient of the honor.

Upon receiving the award, Vicky dedicated it to her friend, late Ruth Morrissey who she described as “someone who would also deserve this honour”. Ruth died at the age of 39 due to inaccurate readings of cancer smear tests in both 2009 and 2012.

During the Vicky Phelan Freedom of Limerick pared-back ceremony, Vicky was joined by her closest family such as her son Darragh.

Vicky was presented the Freedom of Limerick award by Mayor Daniel Butler, who commented, “Vicky Phelan is an inspiration. She has faced and continues to face her health challenges head-on, with a drive and determination that has garnered the respect and admiration of all.

“She is being honoured for her work in uncovering the Cervical Check scandal and her tireless support of other women who have been affected and are fighting for justice – a fight that continues. Her work encapsulates the ideals of the Freedom of Limerick.”

Vicky Phelan has become the 72nd person to receive the Freedom of Limerick. Picture: Alan Place.

Upon receiving news of the award, Vicky said, “I assumed this type of award is for someone born and bred in Limerick or in the particular county where the award is offered.

“When he explained why and where it was coming from – that there were so many people contacting his office wanting to give me a card or a sculpture or painting, that there was a huge demand for something to be given to me to recognise the work I’ve done, I couldn’t believe it.”

Limerick singer Ann Blake performed ‘Brewing Up a Storm’ by The Stunning, which she said was an “absolute privilege” to sing for Ms Phelan.

Around Limerick City, people commented on the Vicky Phelan Freedom of Limerick award and were eager to congratulate Vicky and thank her for all the work she has done for women’s health.

“Vicky is a huge inspiration to all Irish women,” said one local. “The courage she has shown as a person and a woman is just huge.”

To learn more about the Freedom of Limerick, go HERE

Related Topics:Vicky Phelan
Up Next