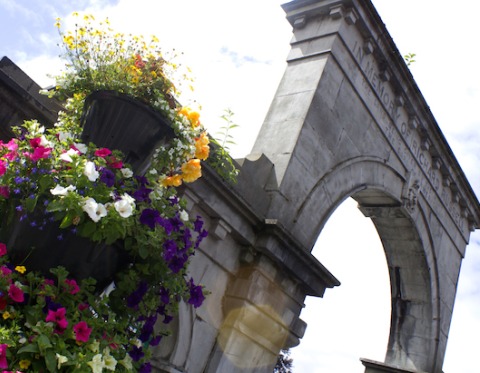 Wildlife of the People’s Park by Albert Nolan

Wildlife of the People’s Park

The sound of the traffic started to fade as I walked into the Peoples Park. Nature was on full show and I heard a starling singing from a nearby tree. Only the male birds sing and they do this to establish their territory and attract a potential mate. They nest in holes in buildings and under our roofs. Many of the trees were in full leaf and I was struck by how much shade they cast and the difference in the level of light between the wide open street and the tree lined paths of the park.

A chaffinch was singing and the male is often mistaken for a robin as he has a bright pink breast. If you get a good look at him you will see he has a slate blue head and thick white wing bars and these features help distinguish him from the robin. Chaffinches feed on seeds and insects and there are plenty of these in quieter corners of the park. I can hear the strident call of a great tit echoing through the trees but the leaf cover is so dense l don’t get to see him.

On the ground a young male blackbird is strutting his stuff. His beak is a pale yellow and as he matures it will turn a bright orange. He is foraging for earthworms and flicks over leaves and bark mulch in the hope that he will find something to eat. Bluetits are hunting for insects and their eggs along the branches off the trees. They hang acrobatically from delicate twigs and use their thin beaks to gather food.

The large flocks of feral pigeons have dispersed for the breeding season and I see single birds feeding along the paths in the park. Suddenly the young male blackbird flies by following by the local dominant male who has returned to put this young upstart in his place. This is a scene that will be replicated throughout the summer as breeding males defend strict borders throughout the park.

High in the tall trees the rooks are busy at their nests. I can hear the young rooks calling and they time the hatching off their young to coincide with leaf burst so their chicks will be protected from the elements and hidden from predators. Tiny pair of Goldcrests are just audible above the harsh calls off the rooks. Goldcrests are the smallest birds in Ireland and its title often taken by the wren.

The Daffodils have finished flowering but natures wildflowers are continuing to bloom. Daises are scattered throughout the grass ands these are a very important source of nectar for early butterflies. Groundsel can be found at any time off the year and it has small yellow flowers. Its fluffy seeds are eaten by birds and they were once feed to cadged birds. The seed heads of dandelions are called clocks and you can tell the time by blowing the seeds away, each blow counts as one hour. Another version was “she loves me or she loves me not”. Another yellow flower is the sow thistle and if you bruise the stem you will find a milky white sap. The bright yellow colour of these wildflowers makes it easy for bumblebees to find and pollinate the flowers in a sea of awakening green.

As I move deeper into the park I hear a grey hooded crow calling. In the countryside these birds are very wary and shy of people but they have adapted very well to city living and have become very tame and approachable. Chaffinches are common garden and park birds are often one of the first birds to break into full song. Their song is short but full off the energy and enthuaesim of spring. They nest in small trees and feed on insects and seeds.

The leaves in the park are stacked in pallets are left to break down. This forms and excellent compost and enriches your soil and promotes healthy plant growth. In has been estimated that in one fistful of healthy soil they are over 7 billion different organisms and you are handing the equivalent off the world’s population in your hand. I see one Jackdaw flying and they sometimes build their nests in the tress with the rooks

May is the time of the Hawthorn blossom and there is a beautiful variety with red flowers growing in the park. The flowers are usually white but I think that the red makes a more dramatic tree. Loud music is blaring from a nearby apartment and I much prefer the quieter tones of the bird singing. On the high boundary walls red valerian is in flower. The roots of this plant are used to make an herbal tea and it is a magnet for butterflies on warm summer days. Ivy leaved toadflax is also growing and it has masses of trailing pink flowers.

Old stumps of trees have been left around the park and some of these have been converted into works of art. One has been carved into a bumblebee and the other the sign for the Special Olympics. Also many species of wood boring insects will live in these stumps and their larva will provide food for birds. I walk beneath the cool shade of the mature Horsechestnut tree. It has beautiful candle shaped flowers but they don’t last very long in our cold and wet climate.

While sound is very important at this time off then year our sense of smell is also highlighted. The beautiful smell of tulips hangs under the shade of a tree and lingers for a few moments and enjoy I pause to enjoy natures perfume. As I pass by the playground a blackbird is been very vocal and singing above the screams off the kids.