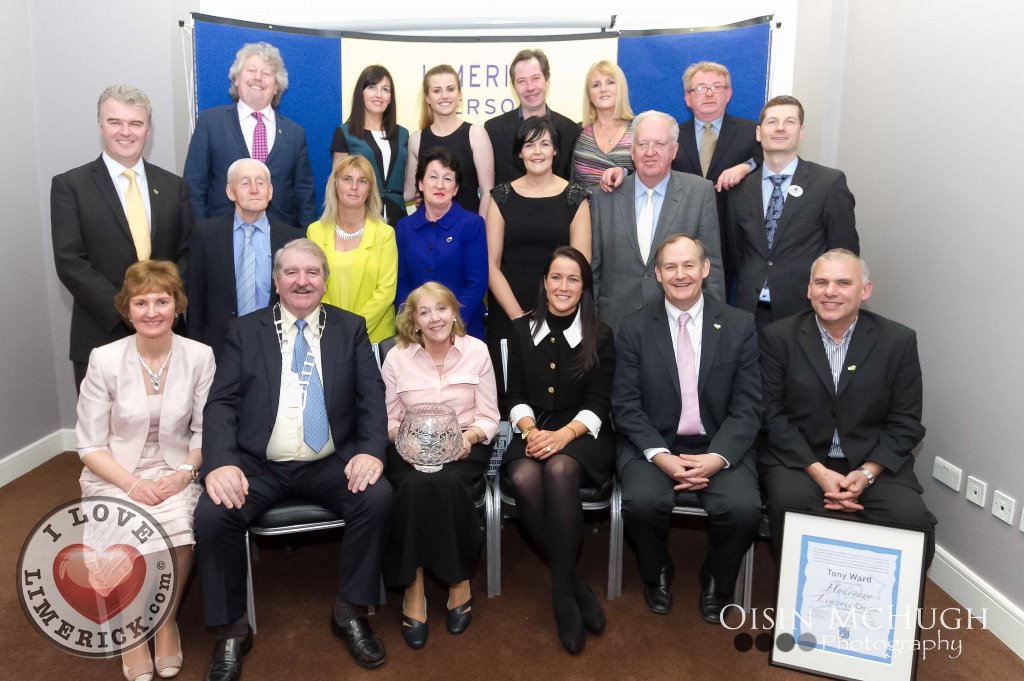 WBO middleweight champion Andy Lee has been announced as the Limerick Person of the Year 2014 at a ceremony in which rugby legend Tony Ward was made an honorary Limerickman.

The announcements were made today at a gala awards lunch in the Clarion Hotel, Limerick. With the champion currently in a training camp in Monaco preparing for his first world title defence, the award was accepted by his mother Ann, with Andy sending a special video message to guests. He said he was “honoured and proud” to have been chosen and paid tribute to his fellow nominees. “This really is mind blowing, this award means a lot to me,” Andy Lee said. “See you all in Limerick soon, hopefully with a successful defence of my title!”

Paying tribute to her son who had grown up in Limerick after being born in London, Ann Lee said Andy always felt like he ‘belonged’ in Limerick.“He grew into Limerick, he considers himself a Limerick person, it’s in his head, he never belonged anywhere else,” she told invited guests. “That’s what Limerick did for Andy, it made him become the man he became. He would have loved to be here and I just want to say a huge thank you on his behalf.”

Andy Lee (30) captured the WBO title on December 13 last when he sensationally defeated Russian boxer Matt Koborov in Las Vegas. The former Olympian was later treated to a hero’s welcome in his native Limerick.

Forty years after he first wore the red jersey of Munster, the Dublin-born Tony Ward was presented with a framed certificate confirming him as an honorary Limerick. It recognised “the joy he has brought to the people of Sporting Limerick”, as a rugby player for Garryowen, Munster, Ireland and the British and Irish Lions and a skilful soccer player with Limerick United. It also saluted his work as a rugby commentator and journalist.

In accepting the honour, Tony commented that the vast majority of the people he meets automatically assume he was born and reared in Limerick, such is the nature of his relationship with the city where he spent the happiest years of his life. Being made an honorary Limerick man means so much to me, this is probably the greatest personal achievement of my life,” a delighted Tony Ward said. “To receive official recognition here today has blown me away. You have no idea of the pride that I’m going to carry.”

This year’s Limerick Person of the Year 2014 judging panel consisted of Alan English, Limerick Leader Editor; Conn Murray, Chief Executive of Limerick City and County Council; and Cllr. Kevin Sheahan, Mayor of Limerick City and County. Mayor Sheahan paid tribute to Andy Lee’s “incredible achievement” and described him as a “worthy recipient” of the prestigious award. “The people of Limerick and Ireland have closely followed Andy’s boxing career and are immensely proud of his achievements. Andy’s world title success means he joins an elite group of Irish boxers who have each won a world title.

“Andy is a worthy recipient of this award. In honouring him today we also celebrate the contribution of St Francis Boxing Club which has played a central role in the career of a world champion, as well as Andy’s late mentor Emanuel Steward who invested his time, energy, finance and faith in the Limerick man as he crossed over from amateur to professional boxing,” said Mayor Sheahan.

Of Tony Ward, Mayor Sheahan commented: “He will always be remembered as one of Munster’s greatest players, the rugby genius who was at his brilliant best on the famous day when the All Blacks were beaten at Thomond Park in 1978. His exciting style of play was hugely appreciated by the people of Limerick and he was a fine soccer player too, winning an FAI Cup medal in 1982.”

Dave O’Hora of Southern Marketing Design & Media congratulated all, pointing out that “each of the nominees have in their own way made an outstanding contribution to the cultural, sporting, business and community scene in Limerick, today Limerick celebrates and it should.”

Limerick Leader editor Alan English commented: “This award scheme is a wonderful mechanism for the people of Limerick to show their appreciation of those who have helped to showcase the city and county in the best possible light at local, national and international level. The Limerick Leader was delighted to have been able to feature the 12 winners of the Limerick Person of the Month Awards and Andy is a worthy winner for his extraordinary achievements in becoming a world champion.”

February – The people of St Mary’s Parish for community response to devastating floods in early 2014.

March – Robbie McNamara, who enjoyed success on the double during the 2014 Cheltenham Festival.

May – Actor, director and playwright Myles Breen for his outstanding contribution to the arts in the Mid-West region.

July – Shannon Airport Chair Rose Hynes for her role in leading the turnaround at the airport since it was made independent in January 2013.

August – Margaret O’Connor for her work to help others recover from their bereavement.

October – John Collins, who at 83 years of age ran his 42nd marathon having only started running in his fifties.