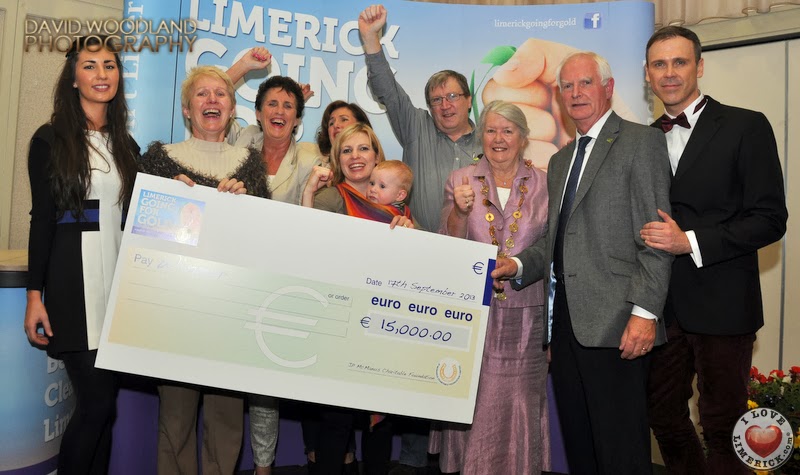 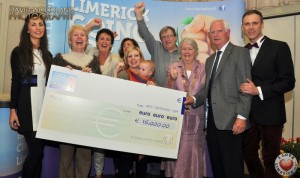 Limerick, IRELAND – There were jubilant celebrations in Limerick’s Strand Hotel this afternoon as the residents of Annacotty claimed the top prize in Limerick Going for Gold. A total of 10 communities made the final of Limerick Going for Gold TidyTowns Category which had a prize pool of €50,000 courtesy of the JP McManus Charitable Foundation. The announcement was made in front of a packed audience comprising representatives of various communities across the City and its environs.  Richard Lynch, from ilovelimerick, played Master of Ceremonies for the event.

Photos by David Woodland for www.ILoveLimerick.com.

Mayor of Limerick, Cllr Kathleen Leddin said Limerick Going for Gold has been “a huge success”.

She added: “I’m delighted with the level of participation in the Limerick Going for Gold Campaign and wish to thank those who took part in the various categories. Limerick Going for Gold’s mission was to make Limerick a brighter, better, cleaner place to live, work and visit and everyone who participated in this campaign has contributed to that mission.  I look forward to seeing this initiative grow in 2014.”

Speaking on behalf of the J.P. McManus Charitable Foundation, Gerry Bolandacknowledged “the efforts made by so many volunteers in making Limerick City and its environs much cleaner.” He added: “Their ongoing efforts are needed, very much appreciated and more people should be encouraged to provide support. Last month under the Going for Gold campaign, a new Lapel Pin was launched by Paul O’Connell depicting the City and County and I would urge everyone to wear it with pride.”

The number of categories in the Going for Gold Campaign, which is now in its third year, this year increased to 4, namely TidyTowns Groups, Other Groups, Individual Merit Award, and Most Creative Garden.

The TidyTowns category was made up of groups who entered the National TidyTowns Competition and the winners were decided by a combination of local judging and results from the National TidyTowns Competition.  Annacotty claimed the top prize (€15,000), followed by Caherdavin in second place (€10,000), Janesboro in third (€6,000), Woodlawn Park in fourth (€4,000), and Carabullawn and Spring Grove in fifth and sixth place respectively (€3,000 each). Each of the remaining four finalists Castletroy View, Fitzhaven/Castlewell/Castlecourt, Garryowen, O’Malley/Keyes each received €1,500.

21 Tidy Town entrants from Limerick City and the environs took part in Limerick Going for Gold. The popular vote finalists were: Janesboro, Caherdavin, Carrabullawn, Spring Grove, O’Malley/Keyes. The remaining four finalists were chosen by the Limerick Going for Gold Panel of Judges. The wildcards chosen were:  Annacotty, Garryowen ,Woodlawn Park, Castletroy View & Fitzhaven/Castlewell/Castlecourt bringing the total number of finalists to 10.

For further information on Going for Gold visit www.facebook.com/limerickgoingforgold