By Richard Lynch on October 7, 2015@richanthon

Kristyn Fontanella and Sibéal Davitt in action rehearsing for their As We Know It Dance Limerick show happening on Thursday October 8. 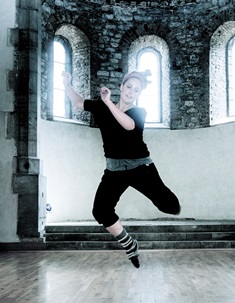 As We Know It dancer Kristyn Fontanella. Picture: Alan Place

As We Know It challenges prevailing attitudes within traditional Irish dance.  Taking the form of a frank conversation between a sean-nós dancer and a traditional step dancer, both artists interrogate each other’s perceptions while progressing towards a new movement dialogue.

During their shared experience on the MA Contemporary Dance Performance programme at University of Limerick (UL) in 2013, Sibéal and Kristyn discovered many similarities on their journey from traditional into contemporary movement.  After completing the course, they felt compelled to collaborate and create new movement together.  They were awarded Dance Ireland’s Mentored Residency in Traditional Dance under world-renowned dance artist and performer Colin Dunne and during this residency they explored the connections between the established styles of Irish traditional dance (step dance and sean-nós dance) and found a new language of movement to traditional music.  This involved looking at sean-nós and step dancing from different perspectives and finding ways in which to create new choreography which is unique to them as traditional/contemporary dancers.  While working closely with traditional music, they use different choreographic methods such as spoken word, floor patterns and improvisation. 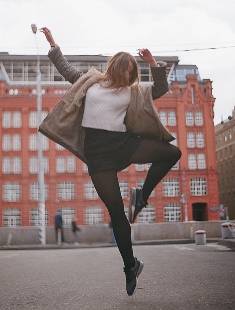 As We Know It dancer Sibeal Davitt

Currently developing their work further while in residence at Dance Limerick, the aim of Kristyn and Sibéal’s joint choreographic practice is to debunk certain attitudes which exist in the realm of traditional Irish dance.  It is their view that a well-recognised division exists regarding the different forms of Irish dance.  Irish dancers perceive other Irish dancers to be different, from another world, but are yet all defined under the same title.  They pave an honest and humorous ground to communicate.  They are not interested in pasting styles on top of one another, but rather in exploring a mutual language, something they recognise as part of their journey through contemporary dance as traditional dance artists.  Sibéal and Kristyn would love to ask what the future is for Irish traditional dance, or ‘contemporary traditional Irish dance’, in a world where its meaning has become somewhat blurred.

Dance Limerick is a resource organisation for professional dance in Limerick and beyond, providing opportunities for dance to be created, experienced and discussed in many ways, by all ages.

Check out more on the Dance Limerick website here.