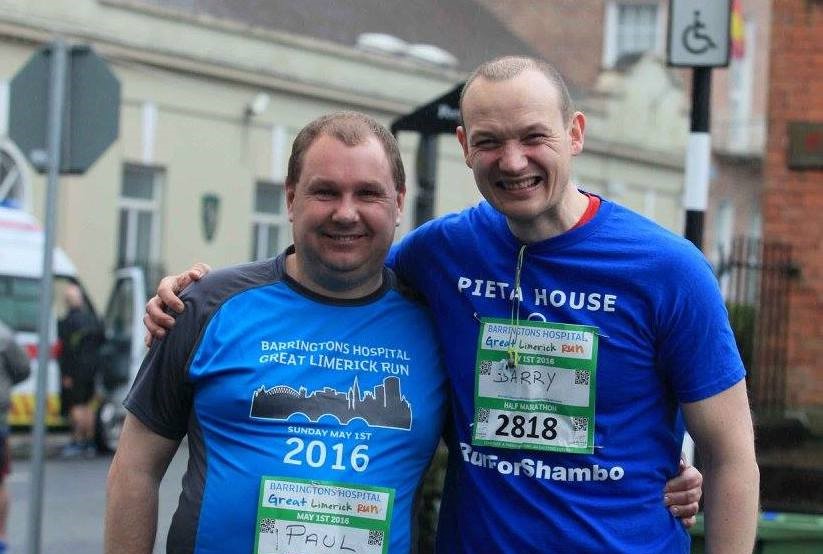 Barry Kennedy from Limerick completed his first half marathon in aid of Pieta House and in memory of his brother in-law Seamus O’ Reilly.

Pictured above: On the Left Barry Kennedy, On the Right Seamus O Reilly

Barry ran the Barringtons Great Limerick Run half marathon on Sunday May 1. Barry dedicated the run to his Brother in Law Seamus (Shambo) O’Reilly who tragically died recently. Shambo himself was involved in many fundraising activities from cancer to mental health awareness. Barry’s aim was to carry on Seamus’ great work and dedicate his first half marathon to him.

Working with Dell, Barry had done some work for Pieta House but never anything on his own. Barry got involved with Pieta House when Seamus passed away by suicide. “I made the decision the night of his cremation to do something to continue his legacy and so I signed up for half marathon as part of the great limerick run” explained Barry.

“Seamus himself had done a lot of fundraising for Pieta House before he passed away”. “He once grew his beard for over a year and raised over four thousand euro for Pieta House” continued Barry.

“He was involved with a lot of charities, every year he did Shave or Dye, so every year he had different coloured hair or a mohekann” laughed Barry.

Pictured above Barry Kennedy with his wife Siobhan and two children

Barry received his sponsorship using an everyday hero page.  He kept people updated on his training regime and shared memories and stories about Seamus.

Seamus O’ Reilly originally from the Shannon banks was the youngest of seven, himself and Barry grew very close when Barry married his older sister Siobhan.

“I want to thank my wife Siobhan, her family and my family for supporting me through my training and pushing the donations and ensuring my target was reached”

“It was really uplifting to work with an organisation like Pieta House and to keep Seamus’ legacy alive, and continue where he left off regarding charity work”

“It’s now something that I want to continue myself, I would defiantly encourage anybody to get involved with Pieta House in any way they can, they are a fantastic organisation who are in need of any donations”.

Pieta House, the Centre for the Prevention of Self-Harm or Suicide, opened its doors in January 2006 and is the first charity of its kind in Ireland. Pieta House offers a specialised treatment programme for people who have suicidal ideation or who participate in self-harming behaviours. The service is free of charge, but donations are welcome. The specialized treatment programme offers a comprehensive service aimed at individuals and their families who are affected by multiple suicidal attempts, suicidal ideation and continuous self-harming behaviours.

Check out some more of Pieta House’s wonderful work here