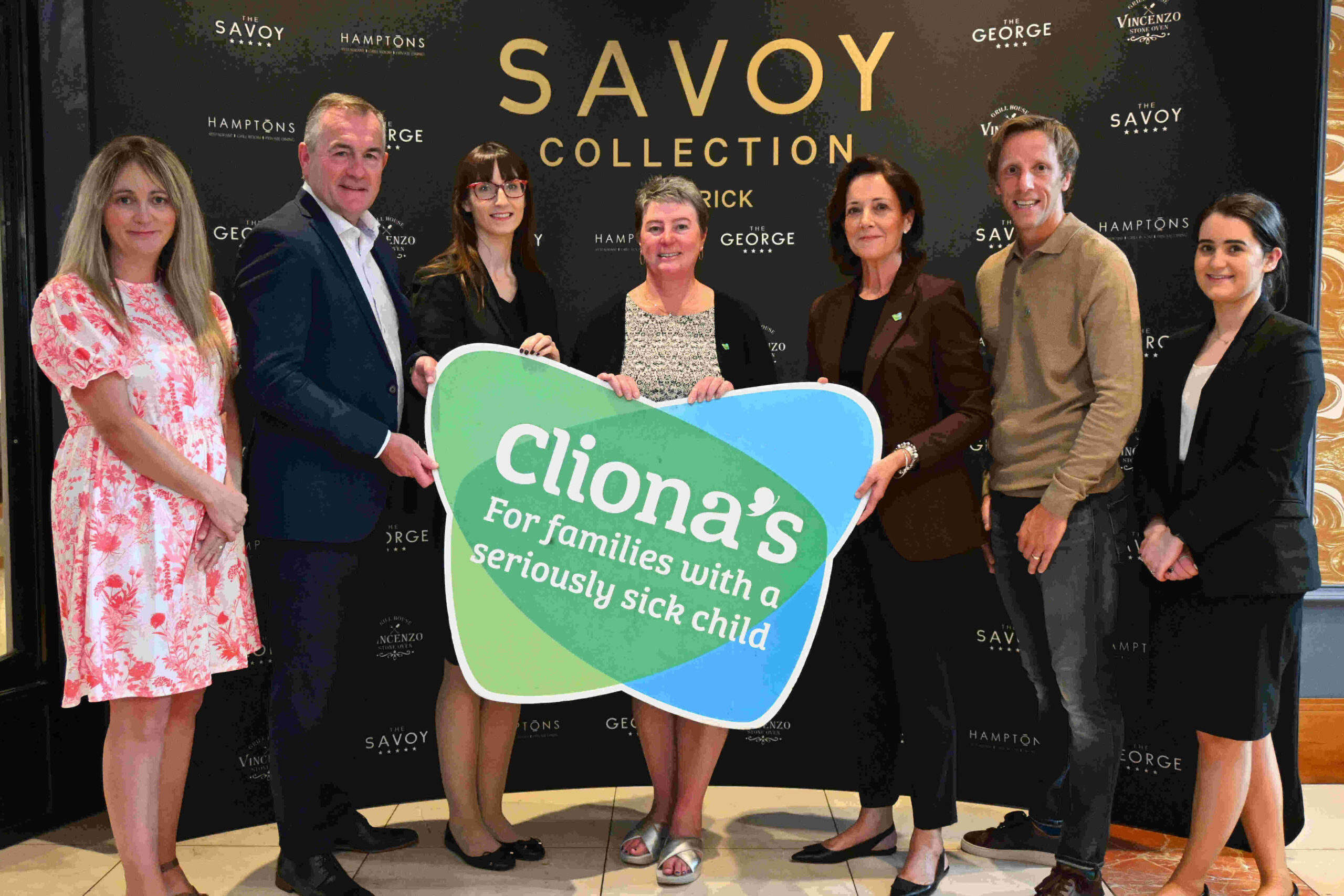 A panel featuring some of the most incredible people will take part in a unique Resilience and Resolve Networking Breakfast in aid of Cliona’s Foundation. The Clionas Foundation networking breakfast is kindly supported by The Savoy Hotel. Panellists John McNamara and Vicki O’Toole joined Cliona’s co-founders Brendan and Terry Ring at The Savoy Hotel Limerick to launch the fundraiser which will take place on Thursday, September 22.

Performance coach John McNamara participated in the Marathon Des Sables in the Sahara Desert in aid of Cliona’s Foundation. The Marathon Des Sables is rated the toughest footrace on earth. John took part in five and a half marathons (260km) in six days across the Sahara Desert. Joining John on the panel is renowned businesswoman Vicki O’Toole, Vicki is well known for overcoming many challenges in life and in business where she is managing director of JJ O’Toole Limited, Ireland’s oldest packaging company. Vicki was also an EY entrepreneur of the year finalist in 2018.

Attendees of Clionas Foundation Networking Breakfast will also enjoy the privilege of listening to Jim Warny. Jim is an expert cave diver and has been diving in caves for over 20 years. He was born in Belgium but is now based in Co Clare.

Well known around the world as an expert in his field, it was no surprise when he was approached by the British Cave Rescue Council to assist with the rescue of the 12 boys and their coach from a flooded cave in Thailand.

All the boys and their coach were rescued from the cave by an international team including Jim who transported the boys for hours, through flooded, narrow sections of the cave in the dark using guide ropes, rescuing them all. The boys, their coach and the rescuers story is being told in the new film Thirteen Lives starring Colin Farrell and Viggo Mortensen.

Speaking about the event John McNamara said, “Cliona’s is a charity I’ve done several fundraisers over the years, and I have huge respect for the work that they do. I see a real connection between what Cliona’s are doing to help families in need and the theme of this unique event. Brendan and Terry have shown incredible resilience and resolve themselves, founding Cliona’s after the devastating loss of their daughter, and continuing this work to this day is remarkable. I am looking forward to sharing stories and insights on the day with the other panellists”

Cliona’s have been helping families in Limerick, in the Midwest and, all over Ireland, since 2008. To date, the foundation has provided financial assistance for almost 1,100 families. Cliona’s Foundation expects at least 200 families will apply for financial assistance this year which sees a 20% increase in applications in 2021 and will need to raise a minimum of €500,000 to meet these applications.

Speaking about the importance of fundraising events for the organisation, Co-Founder and voluntary CEO of Cliona’s Brendan Ring said “So many of these families experienced, and continue to experience, the significant non-medical costs of caring for a child with a life-limiting condition. With inflation at a 38 year high, the cost of living is crippling families who are already devastated by the news of their child’s illness. We must do all we can to help them. It has never been more urgent to work even harder for the “forgotten families of Ireland” that Cliona’s work with. Simply by supporting our events you are helping families who are in a real crisis, so I am encouraging everyone to join us for an inspirational morning in remarkable company on Thursday, September 22 at the Savoy Hotel Limerick.”

Cliona’s are promising an inspiring morning for all attendees of the Clionas Foundation networking breakfast. Tickets include a delicious breakfast in the fabulous five-star surrounds of the Savoy Hotel. This event offers an opportunity to network with other businesses and a chance to hear from some truly remarkable people. Registration begins at 7am and breakfast will be served at 7:30am sharp.