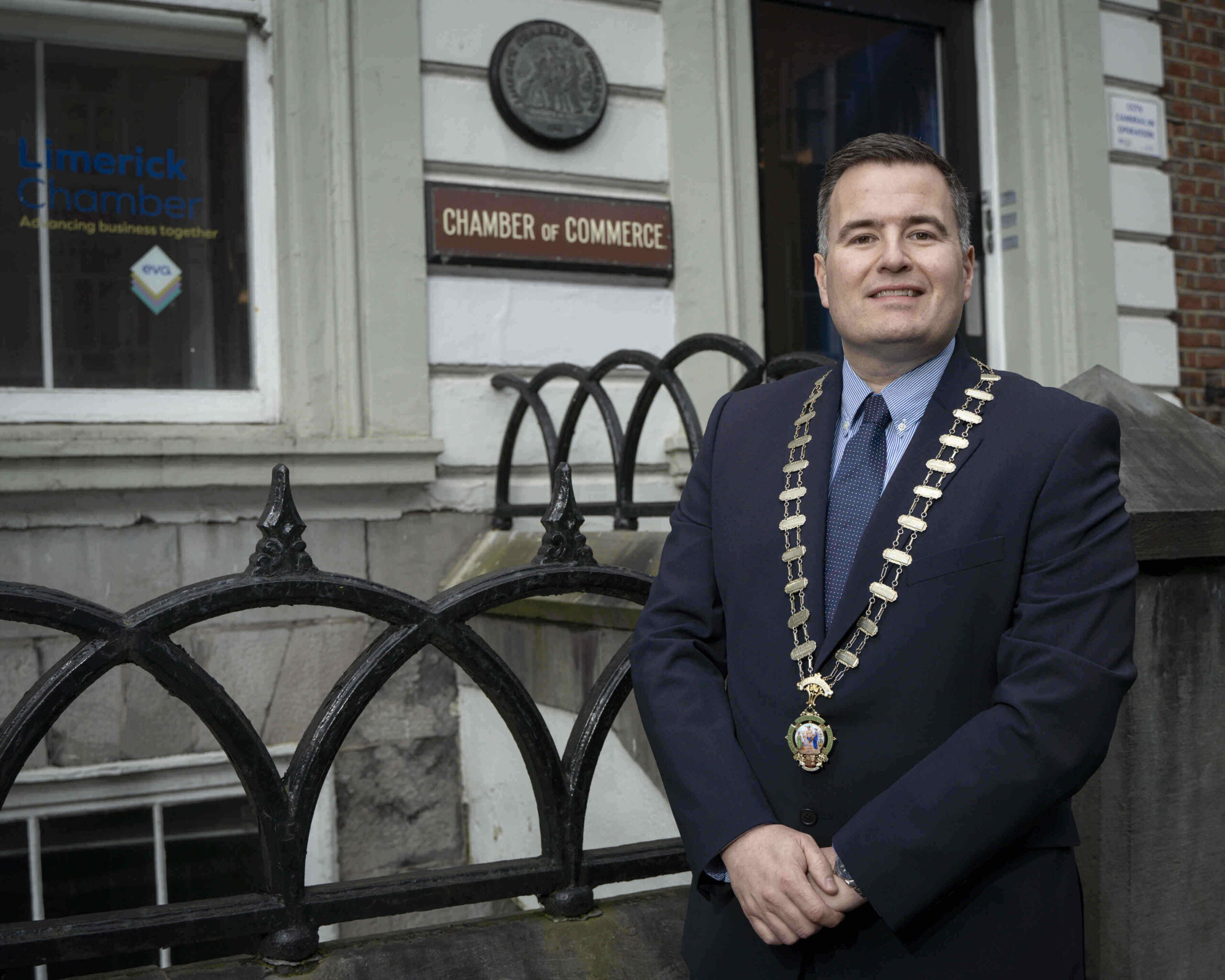 Donal Cantillon the Director of Focus Capital pictured above has been appointed as the new President of Limerick Chamber.

The newly elected President of Limerick Chamber, Donal Cantillon, has said he is “looking forward to taking up the position and continuing the good work of our outgoing president, Donnacha Hurley, who made a fantastic contribution to the Chamber in very challenging circumstances over the last 12 months”.

Welcoming the incoming President, Chamber Chief Executive Dee Ryan said, “Donal takes over as President of Limerick Chamber during an exciting time for members as we emerge from pandemic operations and return to face-to-face innovation.  Donal’s experience as former Head of Business Banking Midwest with Bank of Ireland and his current role as a Director of Focus Capital Partners gives him valuable insights into the challenges facing scaling businesses operating from this region and l have no doubt that he will play a crucial role in supporting Limerick Chamber’s work as the voice of business for the Midwest. The team at Limerick Chamber and I look forward to working hard with him over the next year to serve our members”.

Dee added, “I wish to extend my thanks to outgoing Limerick Chamber President, Donnacha Hurley, General Manager of the Absolute Hotel for his tireless work and dedication to Limerick business over the past 12 months. Also, congratulations to Miriam O’Connor, Partner at Sellors Solicitors, who has become Vice President”.

“It was great to be able to mark the handover of the Limerick Chamber Presidency with the first in-person Board meeting at the Chamber building since February 2020.  This signals an important return to in-person events to take place for Limerick Chamber over the coming weeks and months ahead, starting with our Economic at the Limerick Strand Hotel on Monday, March 14th.  Complimentary registration for this CPD accredited event is open for members on our website now,” added Dee.

Limerick Chamber has thanked Donnacha Hurley, General Manager-Absolute Hotel, for his leadership and guidance throughout a difficult term. Donnacha has said “During my term as president throughout the background of the pandemic, the Chamber continued its journey to lobby for our members interests, even at a granular level as we called for, and saw the establishment of a City Centre Reopening Task Force group, which along with the council and other industry and business representatives worked quickly to highlight priorities and opportunities, whilst dealing with the inevitable hurdles that popped up along the way.

This concept extended to our engagements on the O’Connell Street rejuvenation project where businesses needed to continue to trade whilst the project team needed to complete the physical works. This represents one of the most pivotal public realm projects ahead of the development of Opera and the World Class Waterfront project.”

When speaking on the initiatives achieved throughout his presidency Donnacha added “Additionally, our commissioned Future Limerick Report from this year, while broad in scope, offered 67 recommendations for Government, Limerick City & County Council, and other stakeholders across 9 areas, stemming from a proposed model of sustainable development. The report provided us with evidence-based arguments, to position our lobbying activities across a broad range of areas, both at local and national government levels in addition to engagements with other stakeholders. While the key recommendation is that initiatives that promote vital, liveable city centres are essential, it is also critical to ensure that accountability and measurement of key economic and social data be easily accessible along with an objective project tracker to ensure that all stakeholders can track progress over time.”

When speaking on the difficulties posed by the pandemic throughout his presidency, Donnacha stated “while our opportunity to meet in person was limited, after a sabbatical last year, our awards returned,  thanks to the organising committees drive and determination, and the business communities willingness to engage  and support the concept of hybrid event, something which may not have so easily happened before.”

Donnacha’s final address as President to members, took place at the Limerick Chamber Regional Business Awards, which took place in November as a hybrid event. Speaking of the awards Donnacha said, “Awards like ours are designed to acknowledge companies and organisations in the local region who strive for success each day and innovation and the concept of pivoting, in how, or what we do, entered the business lexicon at a level never seen before. The awards were designed to recognise the hard work, commitment, and innovative approach each winner and indeed nominee showcased, which had contributed to the growth of the organisation and in turn the region itself.”

Donnacha will remain on the board as Board of Director with Limerick Chamber. As Limerick Chamber welcomes Donal Cantillon as incoming President for 2022, Donal has also announced his nomination for Vice President as Miriam O’Connor, Partner, Sellors LLP.

All three Directors are highly skilled and experienced in their respective areas and are important additions to the Chamber Board at a critical juncture in the development for Limerick and the Midwest.

For other stories about Limerick Chamber go HERE