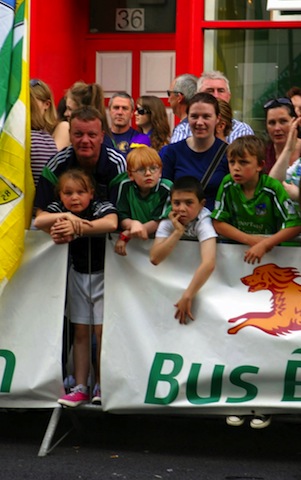 Thousands of teenagers descended on Limerick  for Féile na nGael and to celebrate Limerick hosting the 2013 event, the city held a major parade to kick-start the festival. “It’s absolutely brilliant. It brought 5,000 people into Limerick city and county,”said Mike O’Riordan, secretary of Limerick County Board. “It is the biggest GAA festival of the year. We had a very successful parade, feile and final in the Gaelic Grounds,” he added. Newly appointed mayor of Limerick, Cllr Kathleen Leddin, said Limerick is a proud sporting city with a long standing love affair with the GAA. “Limerick is one of Ireland’s strongest sporting cities and we have proved that with our outstanding performance in the Munster Senior Hurling championship to date,” she said. Féile na nGael which is a national festival for boys and girls under 14 years of age.  The Artane Band lead the parade which will included 5,000 marchers from all 32 counties and five marching bands. The parade began at the Gaelic Grounds proceeded along the Ennis Road, up to O’Connell Street to the review stand. The visiting hurling and camogie clubs were paired with host clubs here in Limerick and will be staying with host families.