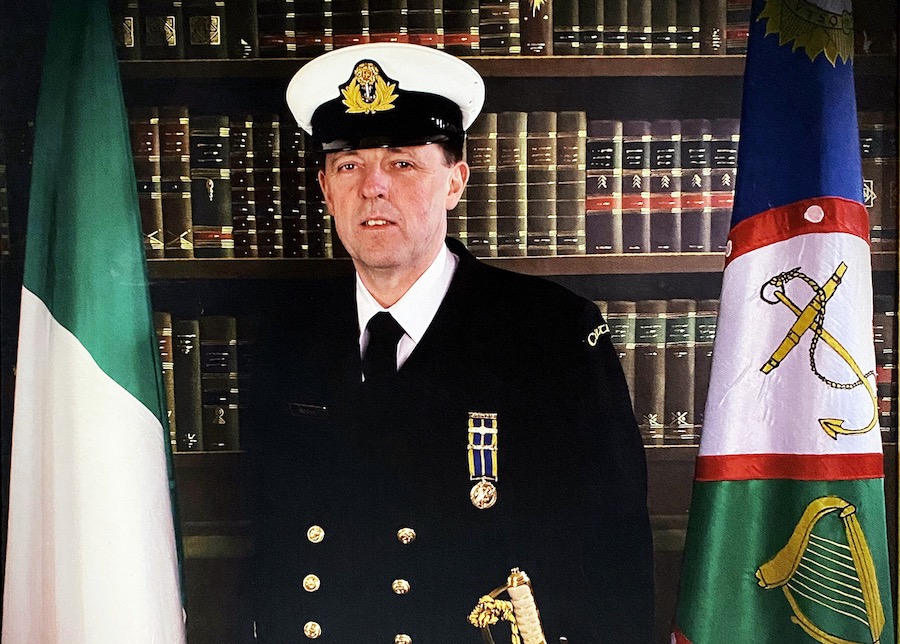 A tribute to Fergal Roche, a true gentlemen and a citizen mariner

Fergal Roche was a Lieutenant of the Irish Naval Service Reserve (An Slua Muiri).

By Mike Foley and Ger Kiely

On Friday, February 25, when the sad news of the passing of Fergal Roche was announced, a chilling wind touched the hearts of Fergal’s friends and colleagues both near and far.

Fergal was a member of SIPTU and was the Secretary of the Irish National Painters & Decorators Trade Union’s Limerick branch. His late father Frank, and uncles Charles and Tony were well-known professionals in the painting/decorating trade in Limerick and surrounding counties.

Fergal was also known in many sporting circles, particularly in his beloved Young Munsters RFC. He was an avid sporting fan and active athlete in his younger years. There was an air of silence and sadness in the Young Munster clubhouse at Tom Clifford Park on Saturday, February 26. A minute’s silence was respectfully observed, with flags flying at half-mast prior to kick-off in an important All-Ireland rugby game against University College Cork.

Fergal Roche joined An Slua Muiri (now The Irish Naval Service Reserve) in 1976, following the footsteps of his father, together with his brother Declan. He quickly established himself as an ace marksman and enjoyed many summer training camps in Fort Camden, Co. Cork, where he mastered sailing, rowing and all the nautical skills needed to be an able mariner. His competence did not go unnoticed, and he was selected for the crew of the naval vessel L.E. Setanta for a voyage to Iceland. It was almost unheard of for a reservist to go to sea as a crew member on a naval vessel – much less on a foreign voyage.

Back at his home unit, No. 5 Company An Slua Muiri, Fergal’s dedication and talent were rewarded with a promotion to Chief Petty Officer. As an important member of the unit, his leadership skills merited his inclusion in an officer’s course, from which he graduated with flying colours and was commissioned as an Ensign in February 1988.  One of Fergal’s first tasks as a new officer was to take over the training and mentoring of the rifle and pistol teams. This resulted in the Limerick unit winning many competitions. Fergal was extremely and justifiably proud of winning the best individual rifle shot – the Blue Riband of the competition – and of leading the Limerick company to team victory.

Fergal embraced the many changes that occurred in the company, including the opening of the Kilrush base, the acquisition of the motor-training launch MTL Barbara Heck, the move of the company to the former Commanding Officer’s house in Sarsfield Barracks, a change in weapons, the admission of females into the navy and the reserve, the change in name from An Slua Muiri to the Irish Naval Service Reserve, and the participation of the company in the New York St. Patrick’s Day Parade.

One might think that Fergal was at the coal face of the military aspect of the reserve, but he also participated fully in the many voyages of motor vessel Kathleen Roma and the sail training yacht Nancy Bet. Fergal was also a qualified skipper on the MTL Barbara Heck.

A seminal experience for Fergal was a long three-week fishery patrol on the naval vessel LE Aoife, just as the reserve was being allowed to go to sea and appreciated as a true naval resource. In addition, Fergal was instructed to prepare the guard of honour to celebrate the 50 th anniversary of An Slua Muiri, a task he achieved with remarkable success despite drawing personnel from five distinct companies and locations.

It was a pleasure and an honour to serve with Fergal for so many years and share his positivity in adversity, his enthusiasm for and his loyalty to all the members of the Limerick Unit of the Naval Service Reserve. It was fitting that he should become the unit’s Officer Commanding before his retirement on age grounds.

Fergal’s service to the state was unquestionable – he was a true citizen mariner. He did not ask what the country could do for him – he looked to see what he could do for his country. The hundreds of well-adjusted reservists and citizens who were privileged to be led, guided and mentored by him will be his legacy. This was evident at Griffin’s Funeral Home on Tuesday, March 1 when many of those serving, and ex-members of the Defence Forces, travelled from all parts of the country to pay their final respects to Fergal and sympathise with his wife Adrienne, daughter Aoife, son Kevin, and all the Roche family members.

At Fergal’s funeral mass in a packed St Joseph’s Church on Ash Wednesday, March 2, Fr. Enright read out several tributes from serving and retired members of all branches of the Defence Forces. Poignant though the mass was, they were truly fitting tributes. As Fergal’s sister Lisa stated in her beautiful eulogy spoken so eloquently at his funeral mass, “I could have gone on for another few hours about my brother, Fergal. He was a highly respected person”.

On arrival at Shannon Crematorium, his colleagues from the NSR and Naval Association removed the tricolour from the coffin and presented it to his wife Adrienne. Inside the crematorium at the end of the service, a bugler sounded the last post and it echoed out in the surroundings as Lieutenant Fergal Roche took his last salute from his Naval colleagues.

On his final voyage, Fergal sailed into heaven in the knowledge he will never be forgotten, by both his family and his NSR and Naval Association shipmates.

He shall grow not old, as we that are left grow old:

Age shall not weary him, nor the years condemn.

At the going down of the sun and in the morning

We will remember him.

Fergal’s month’s mind Mass will be celebrated in St. Joseph’s Church on Sunday, March 27 at 12.30 pm.

Fears for the future of Kilmallock Museum, a focal point of the local community