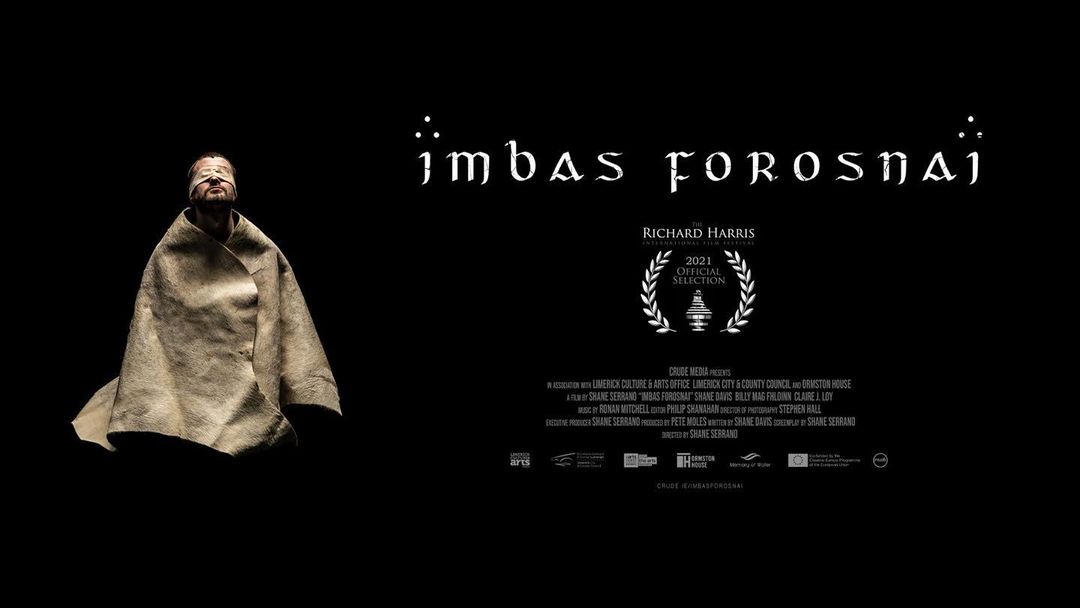 Imbas Forosnai is a short film directed by Shane Serrano and produced by Pete Moles for Crude Media.

Crude, a film and video production company in the midwest of Ireland, are delighted to announce that their short film, ‘Imbas Forosnai’ and two of their short documentaries have been selected for the Richard Harris International Film Festival 2021.

The two short documentaries selected are ‘It Started In The Streets’ and ‘Eye Of The River.’

‘Imbas Forosnai’ is a short film that premiered at Culture Night this year. It is directed by Shane Serrano, an award-winning filmmaker from Limerick City, Ireland, written by spoken word artist Shane Davis, with the consultation of anthropologist and folklorist Dr. Billy Mag Fhloinn. The film was produced by Pete Moles, a film producer based in Limerick, for Crude Media.

Director Shane Serrano said, “We are delighted to have our short film selected for this year’s Richard Harris International Film Festival. It has been in the making for quite some time, we were awarded the Limerick film bursary in late 2019 and were scheduled to start shooting in the first quarter of 2020, but due to the pandemic, everything was put on hold. We were still very fortunate to persevere and safely complete production by September 2020. And we are now very fortunate to begin our festival run with such a reputable festival and in our own home town no less.”

‘Imbas Forosnai’ translates to ‘Wisdom That Illuminates.’ The 15-min short film is based on the clairvoyant practices of poets in ancient Ireland, which is still practised by those with the eyes to see. In the short film, a young poet travels through space and time to come face to face with a being as old as Ireland.

The film taps into our fundamental desire for meaning. It connects ancient rituals with modern concerns, combining the ambitious visuals with the poetry of Shane Davis, who embodies a great and ancient entity, speaking from the perspective of the River Shannon.

It is part of the Global Irish Festival Series, providing screenings of a wide variety of premieres and documentaries, script readings, acting masterclasses, as well as welcoming stars of the screen.

While the Richard Harris International Film Festival 2021 was supposed to be held in person this year, due to reasons outside their control, this edition of the festival along with the in-person screenings has been postponed.