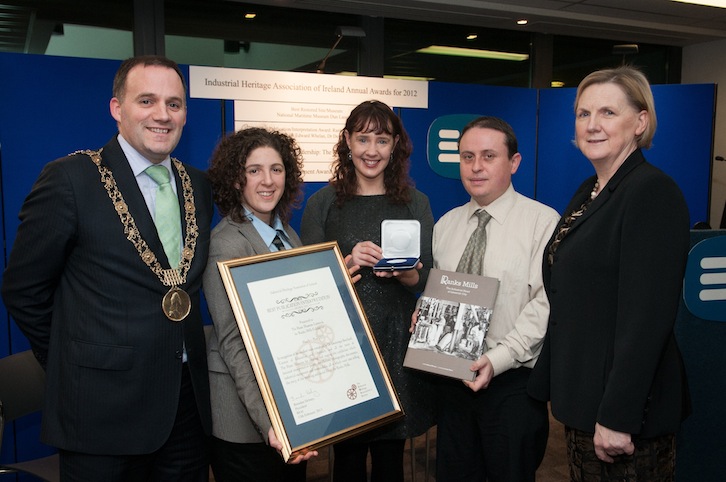 Limerick City Council and the Hunt Museum have won a major award for the hugely popular exhibition on Ranks Flour Mills which was staged in the city last year.

Both organisations have been jointly awarded ‘Best Publication/Interpretation Award 2012 by the Industrial Heritage Association of Ireland at an awards ceremony held in the ESB Head Offices in Dublin.

Welcoming the award, Kieran Lehane Director of Service, Limerick City Council said it is ‘very encouraging’ in the run up to Limerick as City of Culture 2014 to win this award.
“Milling and industry formed a major part of Limerick’s identity and it is wonderful to see that our interpretation of this aspect of our recent past clearly connected with the people of Limerick but also won recognition nationally for the standard of interpretation in this exhibition and publication,” he said.

In awarding the prize, Norman Campion of the Industrial Heritage Association said; ‘The IHAI sees this as a project as an excellent exemplar, encompassing as it does both industrial and social history and embracing research, an exhibition, publications and film as well as representing a fruitful partnership of local interests’.

The donation of the Mercier Papers to the Limerick City Archives allowed the Ranks Mills and its employees to be investigated in an unprecedented manner. Furthermore, an Oral History Project was organised with the assistance of Mary Immaculate College, staff and students.

Through a series of interviews Limerick City Council sought to record the experiences of those employed by Ranks. Thanks to the Mercier Records and the Oral History Project it was possible to write a history of everyday life and work in Limerick and to throw a light on our shared past- a past that has shaped our present.
Through interpretative panels, installations, photographs, documents, industrial equipment and memorabilia the story of the working and social life of the Ranks workers was told at the exhibition in the Hunt Museum which attracted thousands of visitors.

The book Ranks Mills, the Industrial Heart of Limerick City by Limerick City Archives partnered the archival exhibition on Ranks and preserved the memories of the former workers in a beautiful hardback book with never before seen archival photographs.