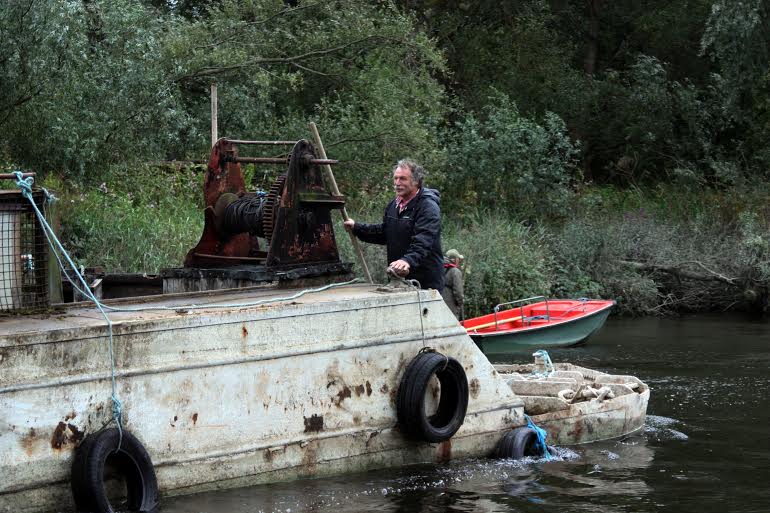 Above: Ray O’Halloran steering the Barge 32E on the last leg of her journey along the Abbey River. Picture:Kieran Ryan.

Limerick City Build (LCB) is a Training and Innovation Centre established at Oscail House, the former Cahill May Roberts building on Bank Place and is home of a number of complimentary programmes and initiatives that will endeavour to tackle unemployment while contributing to the regeneration of Limerick City and environs.

LCB will be working closely with the Local Authority and using government employment initiatives such as the Gateway – Local Authority Labour Activation Scheme to achieve this.

LCB identifies projects, where as many people as possible can be selected from the unemployment register and returned to the work force including a series of river based initiatives aimed at integrating river based activities into the public life. Limerick has had a long history of maritime and early last year LCB began it’s now infamous ‘Culture Cruise’ a guided tour that has been taken by many city officials, that travels through some of Limericks forgotten waterways. The cruise launches from the Custom House Mooring in the city center and taking the journey right through to Ardnacrusha and Killaloe, resting at each historical point of interest along the way.

More recently a far more ambitious project has initiated. The LCB team have acquired a historical vessel with a remarkable biography, the 32E, a canal barge once used to transport Guinness and maize along the country’s canal thoroughfares, it ended up as a dredging vessel before it was retired in the 1950s. This project will restore and re-fabricate this historical vessel and it will serve as a floating café on the banks of our canals.This project has brought much interest from The Irish Heritage Barge Association, who have pledge to bring 19 historical vessels to Limerick this Summer as part of a Maritime festival.

Raymond O’Halloran, founder of LCB tells me, ‘Our broad purpose is to make the main course of the River navigable again and to use it for training and employment creation. We are designing locally focused, River-based plans for the diversion of young and unemployed people back into viable pathways to education and employment. We forecast being able to complete in excess of 100 training packages annually from 2016. The opportunities for social enterprise and local involvement are endless. Fundamental we want to integrate this fundamental resource into our lifestyle as Limerick People. There is no reason why the beautiful rivers of Limerick should not be an intrinsic part of our cultural identity.’

Rape Crisis Midwest Walk in Her Shoes at UL 2015