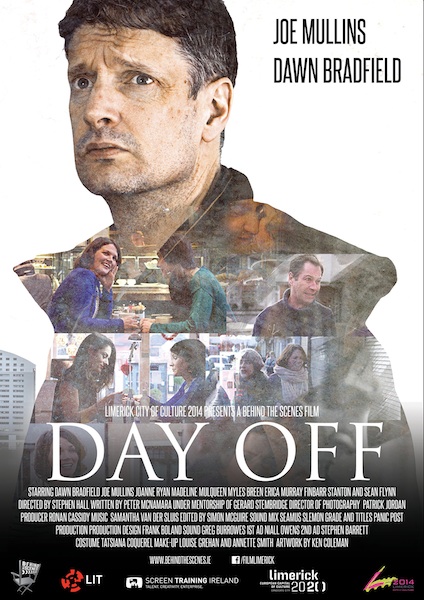 A Cast and Crew Screening of The Limerick Film Trilogy 2016 will take place at the Limerick Film Festival on Friday 15th April at the LIT Millennium Theatre at 8pm. The trilogy consists of three short films that were made with the support of Limerick City of Culture in partnership with Behind the Scenes. The scheme also received assistance from Screen Training Ireland.

This ambitious project was realised by Film Limerick Project Manager Ronan Cassidy and acclaimed Limerick writer and director Gerard Stembridge. The idea behind the project was a way of providing training and experience for those seeking to break into the film industry. Three short films were produced using local filmmakers mentored by industry professionals. Gerard Stembridge selected three writers from Behind the Scenes and worked with these writers individually to make each script as good as it could be. He also took an overview, looking for connecting features and elements that would create links between the stories.

The writers were given maximum freedom to tell whatever story they wanted to tell. The stories had to be contemporary and preferably unfold within a limited time period and Limerick City itself was to be evident as the backdrop. The use of locations in the city is therefore at the heart of each of the films. Even though the films are quite separate stories and work as stand-alone films, seen together they are subtlety linked.

Gerard Stembridge worked with the directors on casting to secure the best available local talent for the individual films. He also oversaw the filming and mentored the directors on set and ensured that the important linking elements between the stories were taken care of, so that the final product would stand up as a single entity.

This highly anticipated screening is a free event and will demonstrate how this genuine community film project came together.