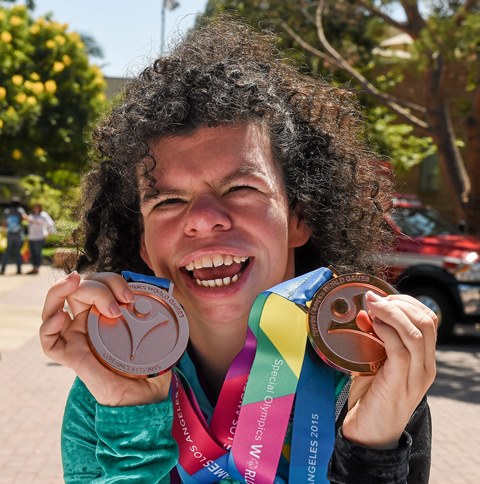 Limerick athlete Ashleigh O Hagan has been living her dreams while taking part in the 2015 Special Olympics World Games. In what has been a truly memorable week, the talented gymnast has claimed two bronze medals and three place ribbons at the LA Games.

While she is busy becoming Limerick’s latest superstar, Ashleigh has met some other stars during her time in LA. Ashleigh has been pictured with singer and ex-Pussycat Doll Nicole Scherzinger and Hollywood A-lister Colin Farrell.

Speaking to Ashleigh’s sister Erin she says: “Ashleigh began training with the gymnastics club in Lisnagry in limerick 12 years ago and she has since taken part in many Irish national special Olympic Games including Belfast in 2004 and Limerick in 2014. She has won many gold, silver and bronze medals competing in the ribbon, ball, hoop and rope events. Ashleigh thoroughly enjoys gymnastics which requires a lot of hard work, training and determination. She has never been one to shy away from a challenge and even though Ashleigh has a different ability, she has continued to strive from strength to strength and succeed. Most importantly, Ashleigh loves the sense of achievement that comes with it all.”

Erin added: “Ashleigh won two gold medals last summer in the Irish games in UL in limerick and this then qualified her to be selected to represent Ireland in the world games in Los Angeles this summer. The main reason she is so delighted to be here representing Ireland, is that she is in a position now to show all the young children and babies who have Williams syndrome that this too is achievable for them. To use her own words of encouragement, minutes after winning two bronze medals at the world games in Los Angeles this week, where she competed against countries such as Brazil, Russia, Estonia and many more: “Keep going, think of the big dream and just let it happen, anything is possible if you try.”

Ashleigh O Hagan is the only Limerick athlete among the 88 people from across the 32 counties who are competing in various events.

Speaking from LA, her dad Brian paid tribute to the people of Limerick for the support during the Games and indeed in the past.

Ireland’s spirit of volunteerism was very evident at Shannon Airport last Thursday as 40 people from the Munster region jetted out to Los Angeles to give a helping hand to their American counterparts and ensure the smooth running of the Special Olympics.

Some 57 volunteers from the province have flown out to LA for the Games in the past week, with the bulk of them departing Shannon and over half of them coming from Limerick. The volunteers were given a reception at the airport ahead of their departure.