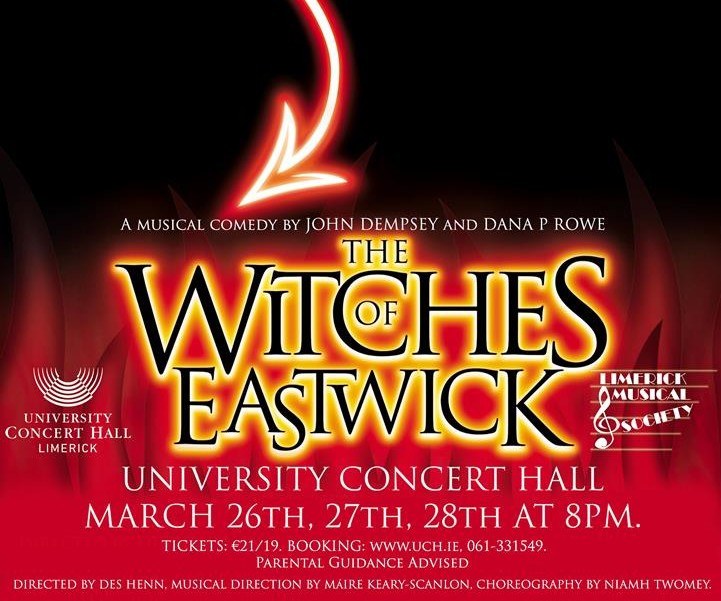 Following on from Limerick Musical Society’s highly successful staging of the Evita, last March we are pleased to announce that our spring production for 2015 will be ‘The Witches of Eastwick’, this one “hell” of a musical will take to the stage at the University Concert Hall for a three night run from Thursday 26 to Saturday 28 of March.

The Witches of Eastwick is a 2000 musical based on the novel of the same name by John Updike. It was adapted by John Dempsey (lyrics and book) and Dana Rowe (music), directed by Eric Schaeffer, and produced by West End impresario Cameron Mackintosh.

The story is based around three female protagonists, the ‘Witches’ Alexandra Spofford, Jane Smart and Sukie Rougemont. Frustrated and bored by their mundane lives in the town of Eastwick, a shared longing and desire for “all manner of man in one man” comes to life in the form of a charismatic stranger, a devil-like character, Darryl Van Horne. Seducing each of the women in turn, Darryl teaches them how to further expand the powers locked within, though their new unorthodox lifestyle scandalizes the town. As these powers become more sinister and events spiral out of control, the women come to realise that Darryl’s influence is corrupting everyone he comes into contact with and resolve to use their new-found strength to exile him from their lives.

Dave Griffin is playing Darryl Van Homme. No stranger to theatre in Limerick, Dave’s musical theatre credits include principal roles with Cecilian Musical Society, Limerick Musical Society, Limerick Tops, Ballenby Productions and in recent years, Bare Space Theatre Company, appearing in everything from Showboat to Camelot, Pirates of Penzance to Singing in the Rain, Sweeney Todd and Into the Woods. Dave’s last production with Limerick Musical Society was in 2002 as Rico Castelli in Copacabana. Dave’s drama credits, particularly with College Players, include the role of Gregor Samsa in the acclaimed All-Ireland winning production of Metamorphosis by Stephen Berkoff, which toured internationally. Dave also played the roles of Mr. Lockhart in College’s touring production of The Seafarer by Conor McPherson, Leo/Maxine in Ken Ludwig’s hilarious Leading Ladies, Nils Krogstad in Ibsen’s A Doll’s House in 2013, Max in the side-splitting Lend Me A Tenor, again by Ken Ludwig, and most recently, at The Lime Tree Theatre as Mr. Boo in Jim Cartwright’s The Rise and Fall of Little Voice. He has also performed previously with Bottom Dog Theatre Company, Granary Players and Mirage Productions.

Sinead O’Sullivan is playing Jane Smart. Originally a native of Cork, Sinead began her musical training studying violin and voice at the Cork School of Music. She later graduated with a BMUS (hons) and a higher diploma in education. She holds licentiate diplomas in violin and voice performance from Trinity College London and the London School of Music. Sinead has established herself as a leading mezzo – soprano performing in the operatic, musical theatre, concert and recital genres. Theatre credits to date include Calamity Jane (Calamity), My Fair Lady (Eliza Dolittle), Little Shop of Horrors (Audrey), Guys and Dolls (Adelaide- winner of best comedienne A.I.M.S.), Annie (Grace Farrell), Into the Woods (Cinderella), Guys and Dolls (Sarah Brown), Singing in the Rain (Lena Lemont), Leading Ladies (Audrey), A Dolls House (Nora), and Lend me a Tenor (Maria).

Laura Henebry is playing Alexandra Spofford. Laura hails from Galbally, Limerick. Laura is a music and geography teacher and is working in Coláiste Iosáef in Kilmallock. This is Laura’s third year with Limerick Musical Society and she is thrilled to be playing the part of Alexandra Spofford. Laura loves the world of musical theatre and all that it involves, she has also been involved with The Cecilian Musical Society and Mary Immaculate College Dramatic Arts Society.

Rebecca Ballinger is playing Sukie Rougemount. Rebecca studied Theatre at the University of Maryland in the United States. Some past roles have been Val ‘A Chorus Line’, Anna ‘Spring Awakening’, and Babette ‘Beauty and the Beast’. Rebecca has also collaborated on several original plays and sketch comedy projects. She currently teaches acting at the Ennis Academy for the Performing Arts with Tommy Drennan and Pearl Kiely. Unlike Sukie, Rebecca has no problem talking your ear off, it’s just writing that makes her incredibly nervous.

Judy O’Connor is playing Felicia Gabriel. Judy has been involved in theatre since the tender age of 16 with Limerick’s first dance troupe ‘Jazmic’. At 22, she travelled the world for 3 years performing with the well travelled organisation ‘Up With People’. On her return to Limerick in 1986, Judy got involved with her first musical ‘Sweet Charity’. This was the start of a long association with Le Groupe, Limerick Musical Society and the Cecilian Musical Society playing many support and leading roles. For the last few years, Judy took a break from musicals, but has continued singing in many charity concerts, functions, and Dolan’s very successful bi-monthly Supper Clubs. Judy currently co-owns and runs Limerick’s premier stage school ‘Spotlight’ with Margaret Hough.

Adrian Egan is playing Clyde Gabriel. Adrian has been a member of Limerick Musical Society for the last three years, and a member of its committee for the last two. A Redemptorist priest, and Rector at Mount St. Alphonsus Limerick, Adrian is used to appearing in front of thousands of people albeit in slightly more ecclesiastical settings than the University Concert Hall. Nevertheless, his acting credentials go back to his days in the seminary in Galway when, in the all-male environment of the seminary, he played the part of Kate Houlihan in ‘All The King’s Horses’, Aunt Abby in ‘Arsenic and Old Lace’, and Moll in ‘Moll’. Leaving aside the stage for the sanctuary for the next 30 years, Adrian was delighted to be part of Limerick Musical Society’s productions of ‘Oklahoma’ in 2013, ‘Evita’ in 2014, and is looking forward to playing the part of Clyde, the long suffering, hen-pecked husband of Felicia, in The Witches of Eastwick. Considering the female roles he played while in seminary he was very close to being given the part of Felicia but, thankfully, Judy O’Connor fitted the requirements for the role a little better. He’s also very useful for the odd wedding celebration or christening that the Limerick Musical Society members might occasionally require a priest for.

Zara Walsh is playing Jennifer Gabriel. Zara attended Spotlight Stage School from the age of 6 appearing in chorus and cast for each end-of-year production. She also starred as ‘Donne Carmichael’ in the musical ‘Mamma Mia Madness’ for her transition year production in Ard Scoil Mhuire, Bruff. Whilst studying at the University of Limerick, she held various committee positions with the Drama Society including vice-president, as well as starring in musical productions ‘Raise the Roof’ and ‘Don’t Tell Mamma’. She starred as ‘Michelle Dubois’ in their production of  ‘Allo Allo’ as well as musically directing and producing the original musical ‘Pop Goes the Indie’. Zara has played guitar for the last 13 years and has performed in the Mid-West area since she was sixteen.

The Witches of Eastwick will be directed by Des Henn, the choreography will be taught by Niamh Twomey and the musical direction will be looked after by Maire Keary-Scanlon.

Booking is available from the University Concert Hall on 331549 or on their website here. This is a show not to be missed!

You can check out the University Concert Hall on their Twitter here, and their Facebook page here.