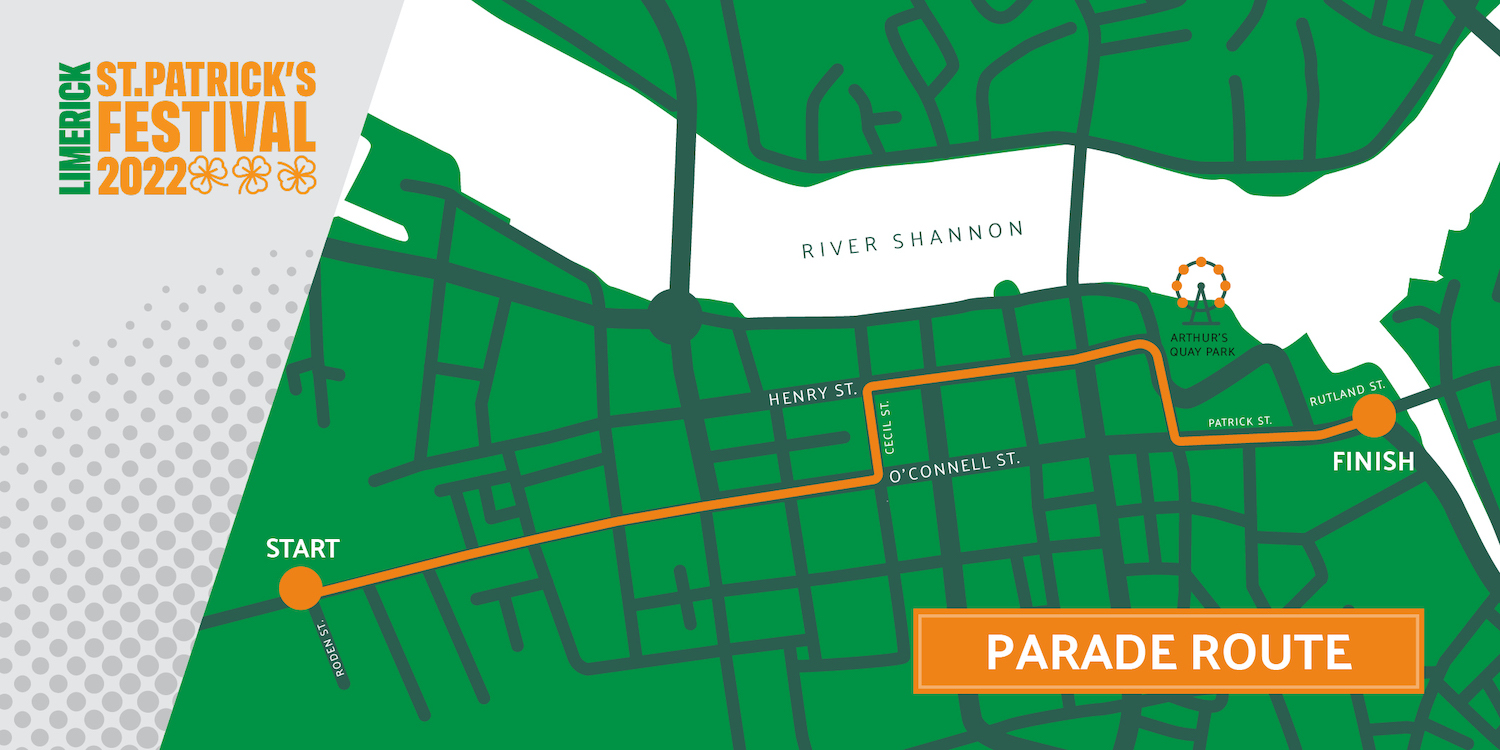 Limerick Parade routes are being changed this year as Limerick’s St Patrick’s Day Parade and International Band Championship will take a ‘detour’ from their traditional routes due to ongoing works on O’Connell Street.

As we welcome back the parade and championship to the streets of Limerick, the Limerick Parade routes are being altered.

The following is the route for the Limerick St Patrick’s Day Parade which starts at 12 noon on Thursday, March 17:

The route then turns left onto Patrick Street before it ends at Rutland Street by Matthew Bridge.

The Reviewing Stand will be located near Arthur’s Quay Park (at the junction of Liddy Street and Honan’s Quay).

The following is the route for the 50th Limerick International Band Championship which starts at 12 noon on Sunday, March 20:

A jamboree will be held at Arthur’s Quay Park with the bands performing and where the winners of the competition announced.

The Reviewing Stand for the Band Championship will be located on Henry Street at the junction of Bedford Row and Shannon Street.

Have you heard the news? #LimerickStPatsFestival returns to the streets of Limerick this year!

This year will include the traditional St. Patrick’s Day Parade, the Limerick International Band Championship, the panoramic wheel and more! ☘️

In what is a first for the festival, Limerick City and County Council has partnered with ASD Ireland to host an area along the route specifically for people with sensory issues.

A special autism friendly area will be located along the route at the Crescent for both days, and will include a sensory room, covered marquee and seating area. Access to this area will be limited with special wristbands being provided by ASD Ireland.

For more information on this area and to apply for access, please go HERE.

A special Digital Guide has been created outlining the events taking place in the Limerick St Patrick’s Festival as well as the routes for the parade.

Among the other family-friendly events taking place for Limerick St Patrick’s Festival include:

Soar above the city and take in the stunning 360 degree views across Limerick’s skyline on the spectacular 38 metre panoramic wheel. Sky-high fun for all the family.

Drum Dance Ireland welcomes you to the world of drumming where the star of the show is you! Children aged 5 to 13 are invited to play bass drums, congas, shakers and bells resulting in a fully interactive fun-filled percussion performance! Pre-booking essential.

Join Lumen Street Theatre on a magical journey of discovery on a self-guided scavenger hunt throughout the People’s Park.

Join us on the streets of Limerick for a day of performance, science and spectacle with antics from Strong Women Science, Monsieur Gusto, Galway Community Circus and Master Magicians Steve Spade and Jack Wise!

Events are subject to change. For the most up-to-date details go HERE

For other stories about St Patricks Day go HERE